I’m not usually keen on suspense thrillers, as I find they generally lack suspense and don’t thrill. A Suspension of Mercy did little to change my mind. I found it contrived and far-fetched.

The central character Sydney is an American thriller writer who fantasises about murdering his posh English wife Alicia, and gets a kick out of giving his neighbours and friends the impression that he’s indulged that fantasy, offering an implausible-sounding (but true) explanation that they’re having a trial separation – it’s difficult to see why Alicia put up with his abusive, selfish behaviour for as long as a year. 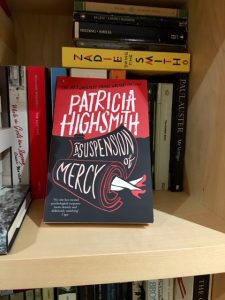 It’s set in rural Suffolk, and mirrors many key aspects of Highsmith’s own life at the time. But even the post-modern metafictional aspects failed to engage me: they too seemed self-indulgent. It seemed to me that PH was having far more fun writing this novel than I was in reading it. Like she’d set herself a challenge to write a murder mystery without a murder – an exercise in plotting. Her characters as a consequence have all the vitality of chess pieces.

Sydney’s slightly deranged flirting with danger in posing as a wife-killer, even though he was innocent, is portrayed with chilling detachment, and this is perhaps the most skilled part of the plotting and characterisation: the doubling and subversion of reliable narrative voice that are among PH’s trademarks work pretty well here.

What’s less successful is the highly unlikely actions of the married pair as their situation spirals out of control. People do die, one more or less of natural causes, though Sydney is again under suspicion, one who is murdered; but neither of the married pair behaves in a convincing manner. They behave in order to keep the plot ticking over, and cease to convince as well-rounded characters.

The secondary characters are also bloodless and serve to move the plot along or keep it tangled, little else – though I quite liked the treacherous turn Sydney’s writing partner Alex takes. People can be horrible like that.

This novel was disappointing. I thought the two others by PH that I’ve read and posted on – Carol and Edith’s Diary – were well written, tautly plotted and psychologically interesting and highly original. A Suspension of Mercy is inferior to them in every respect.

12 thoughts on “Patricia Highsmith, A Suspension of Mercy”