Not much time for reading over the Christmas period, but visitors have now gone, and I can at least post about the first of three long short stories by Wilkie Collins (1824-89) in one OWC volume (2008). The first, Miss or Mrs? (1871) is 80-odd pages long. The middle one, The Haunted House, about which more next time, is probably better described as a novella at 160 pp. The Guilty River is 110 pp. 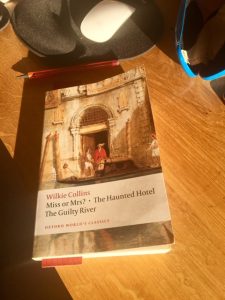 Norman Page and Toru Sasaki point out in their Introduction that these shorter-form works of fiction were well favoured by many Victorian novelists, from Dickens (a friend of and collaborator with Collins) to Stevenson, Henry James to Conrad, and of course with later writers like Thomas Mann and DH Lawrence. Although he wrote more than twenty novels between 1850 and 1890 (Blind Love was published posthumously), and produced his most popular work in the 1860s –The Woman in White (1860) to The Moonstone (1868) – Collins was happy to meet the demand from publishers and the reading public for shorter fiction, mostly published originally in magazine form. Two of them were later republished in book form, thus reaching a new market, and generating a new income stream for author and publisher.

Miss or Mrs? first appeared in the Christmas edition of The Graphic, an ‘illustrated London newspaper’, which sold 200,000 copies. Its typically lurid and melodramatic plot reflects Collins’ knowledge of the law (he’d been intended for a legal career by his father, and was called to the bar in 1851, but soon turned to writing as a profession).

I have a soft spot for these Victorian ‘sensational’ works of fiction. They rely on intricacy of plot and outlandish developments, larger-than-life characters, implausible coincidences and murky secrets to drive the narrative at a cracking pace. Not so much energy or interest is invested in characterisation or psychological verisimilitude.

Readers today might not find it so easy to warm to the two central romantic figures. Natalie Graybrooke is only fifteen. Her weak-willed, money-loving father is easily persuaded by his shady middle-aged and clearly villainous friend Turlington (with some nasty secrets in his history) to consent to their marrying, unaware that the shady ‘Levant trader’ has got seriously into debt and needs the money that her father has promised as a dowry to get him out of his difficulties.

Her secret lover has the implausibly Tennysonian name Launcelot Linzie. He’s not so much older than Natalie, but her cousin – neither her age nor their familial connection seem to cause much of a problem in Victorian times.

The convoluted plot involves a heartless abandonment of a man at sea (in the past), a dastardly murder plot that nearly succeeds (in the present), a blackmail plot, and the lovers’ secret wedding in a dodgy part of London (to avoid the gentry who know her family from finding out about Natalie and Launcelot’s marriage). Because she’s underage – presumably this is why the author makes his heroine so young, otherwise the plot collapses – they can’t elope, as under Victorian law of the time this would open the groom to the charge of abduction (if she’d been sixteen she’s described by him as being ‘ripe for elopement’! – some of the social and gender attitudes are pretty grim). So she has to remain, secretly wed, in her father’s household, subjected to the creepy advances of her would-be husband, Turlington.

It might be a plot device to make Natalie only fifteen, but Collins repeatedly describes her as sexually mature, alluring and nubile. Her physical and emotional precocity is accounted for in further dubious plotting – she’s another of those Victorian plot staples, an outsider: her mother had been born in the West Indies, and it’s thought she has ‘a mixture of Negro blood and French blood’. Both would have been considered sufficient to explain her sexually advanced development (Rochester’s wife in Jane Eyre belongs in this category; Heathcliff, too, in his own way, perhaps). This racial and gender stereotyping is difficult to countenance now, and the love scenes between Natalie and Launcelot are a little disturbing.

It’s good fun finding out how all these tangled threads of plot are tied up by the end, but it’s far from a work of high literary seriousness. Entertaining reading for the holidays, though.

Maybe the plot owes something to Collins’ well-known unconventional personal views on marital relations. From 1858 he lived with a lower-class widow and her daughter. Although she wanted to marry him, he disapproved of the institution of marriage. She left him for a time in the early 1860s and even married someone else, but returned to him and they continued their ménage. In 1868 he met Martha Rudd, then 19, and they began a separate household together and they had three children. He divided his time between the two families. He’d also become an opium addict, having taken the drug initially to treat the painful symptoms of gout.

It’s not surprising really that his stories have such outlandish and sensational plots.