But certain things, as I am becoming increasingly aware, have a way of returning unexpectedly, often after a lengthy absence.

The particular thing Sebald is referring to in this, the first of four sections (as in Vertigo) of semi-fictional (auto)biography/travel writing (I can’t find a suitable term for Sebald’s genre) – ‘Dr Henry Selwyn’ – is found in a report in a Swiss newspaper that catches his eye: the remains of alpine guide Johannes Naegeli, ‘missing since 1914, had been released by the Oberaar glacier, seventy-two years later.’

Naegeli was a close friend as well as mountain guide to Dr Selwyn, the elderly Lithuanian-Jewish emigrant owner of the crumbling Norfolk house that the narrator, presumably Sebald, rented with a woman named Clara – presumably his wife, although in real life she was called Ute. The method in most of Sebald’s fiction (for want of a more accurate word) is to present places and exiled people he encounters that interest him, usually because of something in their history that resonates with the Bavarian-born son of a soldier who served in the Wehrmacht through the Nazi era until the end of the war. He collates oral narratives from people who knew his subjects, or writings in scrapbooks, pictures in photo albums (many of which grainily illustrate this text) and other evidence of their lives in an act of literary bricolage and…what? Atonement? He mentions the ‘lack of memory that marked the Germans, and the efficiency with which they had cleaned everything up’. They had, he feels, collectively erased history. 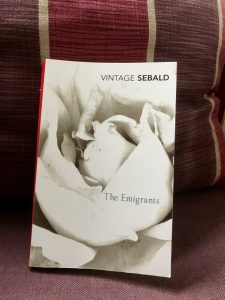 The people who feature in these four chapters come from Jewish emigrant families, most of whom fled the anti-Semitic oppression that surged in Europe (and beyond) from the nineteenth century and on into the early twentieth. By writing about them and their families, the hardships and hatred they endured at the hands of the bigoted and intolerant, Sebald seems to try to exorcise the aching guilt his nation’s terrible past has caused in him and his compatriots – and all those who were complicit in the Holocaust. These fragments he assembles against ruin – his own, and the world’s. But they are as elusive as Nabokov’s butterflies – a recurring image in this novel. (His autobiography has the Sebaldian title, Speak, Memory).

That revenant mountain guide may or may not have existed in reality; such details are irrelevant and elusive in Sebald’s fictional world. He serves as one of countless instances in this strange and haunting novel, of the way the author’s act of testifying in writing simultaneously honours the sufferings of these victims of ultra-nationalism, while failing to assuage his profoundly melancholy unease. The Selwyn chapter ends with a passage that reminds me of Joyce’s ending to ‘The Dead’:

And so they are ever returning to us, the dead. At times they come back from the ice more than seven decades later and are found at the edge of the moraine, a few polished bones and a pair of hobnailed boots.

But even as Sebald records these poignant, concrete details from the lives (and deaths) of emigrants, retrieved from the interstices of history (cemeteries and even glaciers can be historical repositories, mute custodians of the disappeared), he conveys the hopelessness of his task. Lives like the eccentric, reclusive Selwyn’s, who eventually killed himself with his ‘heavy hunting rifle’, or the artist Max Ferber’s, with whom the narrator became acquainted during his years in Manchester, or those of his peripatetic, flamboyant Uncle Ambros Adelwarth, whose own ‘infallible memory’ so haunted him he sought its erasure through ECT treatment, or his junior school teacher Paul Bereyter, who committed suicide when his sight began to fail him, but who had become obsessed with collecting his own archive of suicides. These lives are full of incident and similar factual, concrete details, meticulously set down by the narrator. Yet he despairs about his inability to provide the kind of testimony of their existence that he yearns for. ‘Memory’, great uncle Adelwarth had written as a postscript in his ‘agenda book’, ‘often strikes me as a kind of dumbness. It makes one’s head heavy and giddy…’

In that final chapter on Ferber the artist and the decaying post-industrial city of immigrants, Manchester, that he had made his home, he describes the artist’s obsessive technique of erasure – one that recalls Sebald’s own as a writer:

Ferber had set up his easel in the grey light that entered through a high north-facing window layered with the dust of decades. Since he applied the paint thickly, and then repeatedly scratched it off the canvas as his work proceeded, the floor was covered with a largely hardened and encrusted deposit of droppings, mixed with coal dust, several centimetres thick at the centre and thinning out towards the outer edges, in places resembling the flow of lava.

The meticulous accretion of details here, like a scholarly biographer-historian’s reconstruction of a man’s life and its significance, creates the kind of literary verisimilitude that is usually considered essential in a credibly authentic historical account. Near the end of this chapter, and of the novel, Sebald describes his frustration when trying to write this very chapter, using the documents and photos that Ferber had handed him – an archive of actuality:

It was an arduous task. Often I could not get on for hours or days at a time, and not infrequently I unravelled what I had done, continuously tormented by scruples that were taking tighter hold and steadily paralysing me. These scruples concerned not only the subject of my narrative, which I felt I could not do justice to, no matter what approach I tried, but also the entire questionable business of writing. I had covered hundreds of pages with my scribble, in pencil and ballpoint. By far the greater part had been crossed out, discarded, or obliterated by additions. Even what I ultimately salvaged as a “final” version seemed to me a thing of shreds and patches, utterly botched.

A postmodernist would doubtless seize upon this as a thrilling example of mise en abîme, a description of the futility of trying to articulate anything with signifiers that fail to adhere to the things they attempt to signify (‘the entire questionable business of writing’). I was discussing this feature with Mrs TD, saying that Emigrants was a fascinating example of Sebald’s self-reflexivity, his frustration with the limitations of language in writing this very novel – the act of narrating simultaneously erases what it tries to record.

My post on Sebald’s A Place in the Country

One of my earliest posts was about The Rings of Saturn

18 thoughts on “Erasures and absences: WG Sebald, The Emigrants”