An old lady – Claudia – lies dying in a hospital bed, appearing out of it most of the time, but we are privy in this novel’s first-person sections in a multi-voiced narrative to her still functioning, brilliant mind as it savours memories.

‘“Was she someone?” enquires the nurse’, who patronises her and fails to acknowledge the humanity and intelligence of this impetuous, spirited woman: to the nurse she’s just a delirious, rather querulous and troublesome patient, who needs placating and humouring.

But the doctor, reading her notes, confirms what Claudia’s thoughts had alerted us to a few lines earlier: ‘”Yes, she does seem to have been someone’ – and he recites her history as recorded there:

…”evidently she’s written books and newspaper articles and … um…been in the Middle East at one time…typhoid, malaria…unmarried (one miscarriage, one child, but he does not say)…” [ellipses in the original text] 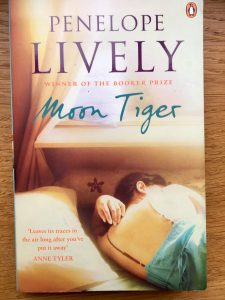 Moon Tiger, Penelope Lively’s tenth novel, won the 1987 Booker Prize, and it’s easy to see why: it’s a moving account of Claudia’s tempestuous, richly textured life in the context of the history of the world in which she lived. That terse list of her achievements – of the scars life left on her and the legacy she left – is brought dramatically to life in this novel. Claudia lives on in the reader’s memory long after finishing it – a difficult, prickly, assertive woman who scared many who knew her with her uncompromising confidence and glamorous good looks: ‘sometimes she squashes people,’ is one comment about her from someone who loved her.

The novel opens with Claudia saying that she’s writing a history of the world, ‘And, in the process, my own’:

fact and fiction, myth and evidence, images and documents.

The raw material of the historian and journalist that she had been. In writing this personal and universal history in her head, however, she is attempting to make ‘real history’, her story. ‘Everything and nothing’ is her method, a refrain that recurs throughout the narrative.

Coming to this novel after WG Sebald’s The Emigrants was illuminating. Like Sebald, she’s concerned not just with events, evidence, data, but with something more profound and important, more elusive.

She recalls a trip with Gordon, the dying brother with whom she had an intense, even sexual, love-hate relationship. As usual he has challenged her, deprecating her kind of history writing. She vehemently refutes his suggestion that she disdains theory, preferring to write popular histories that appeal to less discerning readers, about ‘action’ and the big names: Tito, Napoleon –

“That’s not real history. History is grey stuff. Products. Systems of government. Climates of opinion. It moves slowly. That’s why you get impatient with it. You look for spectacle…[and this] may mislead. What’s really happening may be going on elsewhere.”

“Oh, come on,” cries Claudia. “You’d tell the prisoner on the guillotine that the action is really somewhere else?”

Yet in that opening hospital scene Claudia had reflected on the nature of her history:

The voice of history, of course, is composite. Many voices; all the voices that have managed to get themselves heard. Some louder than others, naturally. My story is tangled with the stories of others…their voices must be heard also, thus shall I abide by the conventions of history. I shall respect the laws of evidence. But truth is tied to words, to print, to the testimony of the page. Moments shower away; the days of our lives vanish utterly, more insubstantial than if they had been invented. Fiction can seem more enduring than reality…History unravels; circumstances, following their natural inclination, prefer to remain ravelled.

The novel’s longest and most vivid section – an evocation of the central and most important episode in her ‘composite’ life when she was a war correspondent in Egypt in the 1940s, and met the love of her life – reveals the cause for this philosophy of Claudia’s. She sits trying to file copy in her room while worrying about her soldier lover’s fate. There are the statistics of retreats and advances, tanks and aircraft lost, men taken prisoner:

Figures dance on bits of paper, tenuously related to machines, to flesh and blood. There is out there, where these things or something like them are supposedly happening, and back here where ice clinks in glasses at six and hoses play on the gardens of Gezira.

Like Sebald, she reflects on the ‘disorder’ that follows war, its ‘aftermath’:

The aftermath of war should, correctly, be another war; it usually is. But the conventional aftermath is the struggle to set straight that which is awry; the taking stock, the counting of the living and the dead, the drift of the dispossessed back to their homelands, the apportioning of blame, the extraction of penalties and, at last, the writing of history. Once it is all written down we know what really happened.

Like him, she attempts to articulate a response to reading the entries in a loved one’s diary at the end of the novel. It’s more poignant and revealing than any accumulation of evidence:

I cannot analyse and dissect it, draw conclusions, construct arguments. You tell me about gazelles and dead men, guns and stars, a boy who is afraid; it is all clearer to me than any chronicle of events but I cannot make sense of it, perhaps because there is none to be made. It might be easier if I believed in God, but I don’t. All I can think, when I hear your voice, is that the past is true, which both appals and uplifts me.

She needs these memories:

And I can only explain this need by extravagance: my history and the world’s. Because unless I am a part of everything I am nothing.