This is going to be controversial.

Two young people are finding their feet in post-crash Ireland as they leave sixth form for university and beyond. Published when she was just 27, Sally Rooney’s second novel Normal People has had a sensational success. Costa Winner, Waterstones book of the something – year? Month? I know when I bought a copy for Mrs TD they had it stacked high everywhere, and the staff at checkout were all wearing Normal People badges. At first I thought it was an off-colour statement about their view of their customers.

When she’d finished it Mrs TD insisted I read it to compare notes. I’m afraid I was less enthusiastic than she was, and certainly less than most of the gushing reviews in the media. 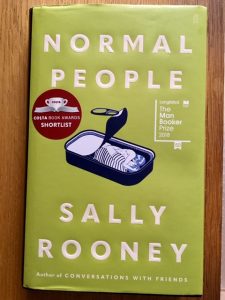 It’s been hailed as a zeitgeist novel, capturing the ‘collective precariousness’ (Guardian) of our times – not just personal but economic and political. I can’t say that’s what I took from the novel. And Rooney is said to have got into the heads of her two love-lorn protagonists, Connell and Marianne as they learn to come to terms with their sexual and emotional hangups.

That same Guardian piece by Sian Cain added the rider that these two are ‘over-educated, neurotic, and slightly too self-aware’ – Connell sees himself early on as politically astute and feels poised to engage in intelligent, sophisticated discussions about the Greek crisis at smart dinner parties when he leaves home. But, Cain concludes, Rooney avoids the pitfalls of ‘hysterical realism’ by showing, for example, how sincerely engrossed Connell becomes in his reading of Jane Austen. She insists we’re less concerned with the overblown context and focus on whether these two insecure adolescents will manage to find happiness together as they do their damnedest to break up.

I never became that invested in their fate, I’m afraid. I found them rather irritating – a sort of Roddy Doyle version of The Inbetweeners (both of which, I think, do what they do in a less ambitious way, but more successfully). Maybe because I taught that age group for so long. It was like reading an account of a normal day at work.

The dialogue is brilliantly handled, as others have said – but to what end? Sure, this is a sensitive and deftly done examination of maturing sensibilities, learning to realise that love is complicated and often painful, and sex is more than recreation.

There’s a lot of graphic sex, angst and teen slang and syntax – Yeah, he says. No – is one of Connell’s habitual contradictory responses to questions (Rooney dispenses with punctuation of direct speech, for some reason). I suppose he’s so shy and messed up he can’t commit to even the simplest of prompts, let alone negotiate owning up to his laddish mates that he’s having sex with a girl thought to be a weirdo, and who harbours masochistic tendencies as a consequence of her abusive upbringing.

I know this response sounds a bit harsh, and I did find the emerging horrors of the cruel treatment Marianne endured from childhood at the hands of her brutal father and brother almost unbearably moving. Normal People does give an unusually frank and (so far as I can tell) honest and accurate portrayal of young love’s traumas, mistakes and betrayals.

But I still prefer Jane Austen’s approach in Emma.