I started this post intending to discuss the three books about La Serenissima [see my picture] by Brodsky (thanks to Karen of Kaggsysbookishramblings blog for the recommendation), Marías and Morris. I became sidetracked – hence this is now an Aside-type post.

Venice has been so often painted, written and sung about, filmed and celebrated that I felt before my first visit there last week with Mrs TD (for her birthday) that I already knew the city; I was prepared to be disappointed. I wasn’t: it’s breathtaking.

For centuries it’s been associated with decadence, sin, dishonesty and deception, ruthless capitalism, danger, sickness and death. From The Merchant of Venice and Othello, Moor of Venice to Thomas Mann’s novella Death in Venice (and the lush 1971 Visconti film with Dirk Bogarde) and Nicholas Roeg’s Du Maurier-derived 1973 film Don’t Look Now, it’s been the setting for all of the above. Don’t pursue the diminutive figure in a red cape beckoning you down a canalside alley cul-de-sac…

A few years ago, in a sequence of posts about Henry James, I wrote this on his 1888 novella The Aspern Papers, one of several by him with a Venetian setting.

Twitterfolk recommended some more Venice-set reading to prime us for our holiday; I posted back in December 2018 on Wilkie Collins’ so-so ghost story ‘The Haunted Hotel’ 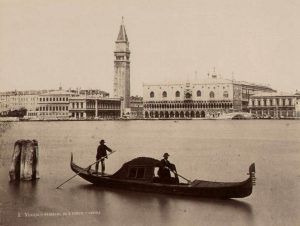 Photo from the 1880s by Carlo Naya, ‘Panorama da San Giorgio e gondola’; the Doge’s palace and the Campanile (which a few years later fell down) in the background.

Last month it was Hemingway’s rather unpleasant late novel Across the River and into the Sea – duck-shooting and execrably written gondola sex with the 50-year-old protagonist-narrator and his fantasy teenage lover. This seems to take place under cover of the ‘felze’ – the curtained or solid canopy-cabin that used to be common on gondolas to maintain the privacy of the passengers. Gondolas today all seem to be open, like punts, with no such concealment.

This is where I start to digress. Hemingway’s Colonel’s gondola tryst with his seductive young Contessa reminded me of Byron, one of Venice’s greatest advocates (perhaps because he indulged in such unbridled debauchery there; Hemingway namechecks the poet in the narrative with approbation about his popularity in ‘this town’).

Soon after his wife Annabella finally left him, taking their newborn baby Augusta Ada (later Ada Lovelace, the pioneer mathematician to whom the notion of the computer is often ascribed) with her. He thought it expedient to leave England in 1816. He never returned.

I’ve written previously about the first parts of his trip, including the stay at the Villa Diodati with the Shelleys (her stepsister Claire Clairmont had thrown herself at him by this time. She was soon to be abandoned, as was their ill-fated daughter Allegra, who died aged five – a familiar pattern emerges). He travelled on to Milan, arriving in Venice in autumn 1816. 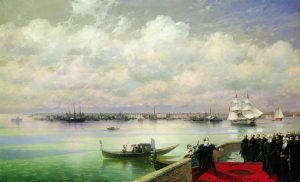 He was immediately smitten. He also threw himself vigorously into sexual profligacy. When not debauching, swimming or riding, he took to visiting the Mechitarist order of Armenian monks on the island of San Lazzaro degli Armeni, where he redeemed himself somewhat by learning (or trying to learn) Armenian, helping translate several of the order’s texts into English, and with the compilation of an Armenian grammar guide and Armenian-English dictionary. Unfortunately I didn’t get time to visit the exhibition at San Lazzaro on this aspect of his contribution to Venetian culture during my stay; maybe next time. [Jan Morris has a lovely account of this island monastery and the Byron connection at pp. 272 ff.; more on her book in a later post.]

After several passing references in earlier poems to Venetian matters, he wrote a Venice section in Childe Harold’s Pilgrimage (1817) – where he informs us that unlike in the time of Goethe’s visit in 1786, the gondoliers no longer sang the words of Tasso and Ariosto to tunes of their own composing.

Beppo (1818) is set during the Venice carnevale; the garrulous narrator describes with gleeful ribaldry the potential for decadent sensuality during a gondola ride:

Didst ever see a Gondola? For fear

You should not, I’ll describe it you exactly:

Carved at the prow, built lightly but compactly,

It glides along the water looking blackly,

Where none can make out what you say or do.

And up and down the long canals they go,
And under the Rialto shoot along,
By night and day, all paces, swift or slow,
And round the theatres, a sable throng,
They wait in their dusk livery of woe, –
But not to them do woeful things belong,
For sometimes they contain a deal of fun,
Like mourning coaches when the funeral’s done.

He celebrates in this poem the looser, more pragmatic morals of the Italians, especially in their liberal attitude towards adultery, which he compared favourably with the more hypocritically puritanical (as Byron saw it) English. He gave prominence in this poem to the figure of the cicisbeo or cavalier servente: a gentleman who’d escort and protect a married lady in society, with the collusion of her husband. This ‘escorting’ might also include a sexual element – the part that Byron found particularly exhilarating: here’s his account of Laura’s response when her husband goes missing on a voyage, feared dead:

And Laura waited long, and wept a little,
And thought of wearing weeds, as well she might;
She almost lost all appetite for victual,
And could not sleep with ease along at night;
She deem’d the window-frames and shutters brittle
Against a daring housebreaker or sprite,
And so she thought it prudent to connect her.
With a vice-husband, chiefly to protect her.

In June 1818 he moved into the Palazzo Mocenigo, beside the Grand Canal (the length of which he liked to swim, when he wasn’t doing so off the Lido). 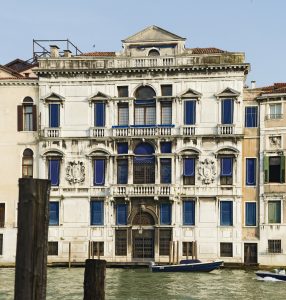 I thought I’d taken a picture of this grand palazzo from a vaporetto, but on checking online I found I’d mistakenly framed the building next door. His ménage included fourteen servants, a menagerie including several dogs, monkeys and a fox. In his letters he loved to present a raffish image, claiming he’d bedded over 200 women and spent a fortune – such services didn’t come cheap in a city where sex was widely for sale. Shelley’s account of his friend’s amorous activities is less poetic; he claimed Byron made extensive use not of elegant courtesans but of the lowliest women in the city. Like John Addington Symonds and Frederick ‘Baron’ Rolfe in later years, he appears to have indulged in a squalid kind of sexual imperialism, not romantic trysts.

Here’s how he presented, with mock sobriety and restraint, in a famous letter of 1819 to his friend Douglas Kinnaird, what happened during this sojourn in the palazzo [link to online source, which contains the hyperlinks]:

I have been faithful in my honest liaison with Countess Guiccioli — and can assure you that She has never cost me directly or indirectly a sixpence — indeed the circumstances of herself and family render this no merit.  — I never offered her but one present — a broach of brilliants — and she sent it back to me with her own hair in it (I shall not say of what part but that is an Italian custom) and a note to say she was not in the habit of receiving presents of that value — but hoped I would not consider her sending it back as an affront — nor the value diminished by the enclosure. — I have not had a whore this half-year — confining myself to the strictest adultery.

The nineteen-year-old Contessa Teresa Guiccioli had only been married a year to a count in his late fifties (how Byron would have loved reading that Hemingway Venice novel with its similar liaison). She and Byron were to spend the next four years together in various Italian cities.

He composed the first cantos of his ‘Epic Satire’ Don Juan in Venice’s stimulating environment. When the first cantos (unsurprisingly) provoked as much opprobrium for their immorality and bawdiness as praise for their comic genius, he defended himself with characteristic flamboyance that same Kinnaird letter:

As to “Don Juan” — confess — confess — you dog and be candid that it is the sublime of that there sort of writing — it may be bawdy — but is it not good English?  It may be profligate — but is it not life, is it not the thing?  — Could any man have written it — who has not lived in the world? — and tooled in a post-chaise? in a hackney coach? in a gondola? [my emphasis] against a wall? in a court carriage? in a vis a vis? — on a table? — and under it? 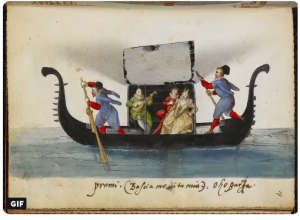 Today in my Twitter feed I came upon this lovely image from the British Library: what appears to be a double-prowed Venetian gondola in an image from a 1588 ‘friendship album’, publicising a free exhibition at the BL, Friendship Before Facebook, that’s running until May 12. Click the link to (hopefully) access the BL’s gif in which the felze cabin covering is cheekily removed to reveal the seduction taking place inside.

Clearly it would have been easy to conduct illicit dalliances in such a vessel. Like Madame Bovary in her curtained carriage – but on the canal waters with an indulgent gondolier turning a blind eye – and deaf ear – to what was going on inside the felze. (I’m indebted to Jan Morris’s fascinating account of gondolas for the Venetian terminology).

More on Venice next time.

One of my first posts here was about some lines from Beppo cited by TS Eliot (dining on ‘becaficas’) and Byron’s ingenious, audacious rhyming practices.

Posts about Mary Shelley, Frankenstein, the visit with Byron by the Shelleys and Byron’s physician Polidori at the Villa Diodate (before Byron reached Venice), and related matters here

[All images in the public domain via Wikimedia Commons]