Dürrenmatt post 2: The Pledge – Requiem for the Crime Novel.

This is the last of the five novellas in my paperback Picador edition.

There’s a link to Grant’s post on it at his 1st Reading blog in my previous post. He summarises the plot and comments perceptively on the significance of the frame narrative as a crucial element of the novel. This enables the world-weary, experienced detective (the main narrator) to challenge the crime writer’s methods and explain why he disdains his moribund genre of novel writing – hence the subtitle.

He concedes that it may be ‘morally necessary’ for the puzzle or contest to be resolved by the detective in these stories so that goodness and justice prevail over evil and crime. But the ‘rules of the game’, as in chess, don’t apply or even exist in the real world he operates in. Life is more random. 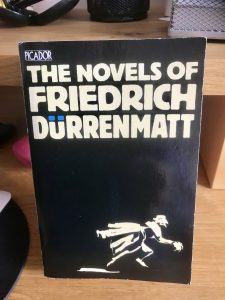 The story he tells to justify his argument is a fascinating example of metafiction serving to highlight the weaknesses in the genre he (and FD) criticises. He’s able to highlight, through this story of the investigation of a serial child sex-murderer, the way a chance accident, a random, unpredictable event can foil the most brilliant detective like Matthaï in this story.

Unlike the two Inspector Barlach novellas discussed in my previous post, this story doesn’t simply favour the detective’s intuitive, spontaneous approach over the conventional scientific-rational police methods of his colleagues. The neatly symmetrical generic plot with its satisfyingly neat conclusion is exposed and debunked. The black-and-white morality of the conventional murder mystery is nevertheless as blurred as it is in the Barlach stories. Justice is again ultimately shown to be an illusion.

Like the classic tragic hero in drama, Inspector Matthäi’s hubris in this story causes his downfall. His arrogant ‘pledge’ to the parents that he’ll catch the killer of their daughter arises from his arrogant confidence in his detection skills (plus he panics and is desperate to escape their despair so blurts out what pops into his head). In fact his logical methods and his motivation become increasingly irrational, obsessive and as deranged as the killer’s.

By refusing to abide by the ‘rules’ of the genre, Dürrenmatt ingeniously subverts the genre he is simultaneously rewriting. As Grant says in his post, he thus explores and problematizes the moral dilemmas and philosophical questions that are raised by this cunningly framed plot. There’s even a grim humour in his exposure of the flaws in the famous crime writer’s (the frame narrator’s) predictable fictional conventions. It’s this self-referential destruction job that makes the novella so intriguing and rewarding.

One of my less impressed initial reactions was that the rash promise (or Pledge) to catch the criminal made to the murder victim’s family was a cliché. I’ve seen this trope countless times in recent TV crime dramas. In most cases the detective making the promise is inexperienced, and allows their emotional response to the grieving family, or their over-confidence in systematic, scientific detection methods, to cloud their judgement.

But then I reflected that FD was doing this in 1958. I’ve little knowledge of the history of the crime genre, but I’d have thought this was pretty innovative at that time.

The subversive ingenuity of this novella was made even more apparent for me when I read at the Univ. of Chicago Press site (link in previous post) that this prose fiction work is a reworking of an original TV play by FD. He was dissatisfied with the conventionally neat ending of that drama, in which the murderer is caught as a consequence of the brilliant Inspector’s relentless and systematic detection methods. It seems he thought this trivialised the story. He deliberately reworked the ending so that the chance accident that Matthaï didn’t or couldn’t anticipate thwarted his success and plunged him into his own moral and mental dissolution. The solving of the case is less important than the sad fate of Matthäi in this subversion of the generic convention.

FD’s achievement here puts me in mind of DH Lawrence’s famous statement in his essay ‘Morality and the Novel’, in Study of Thomas Hardy and Other Essays (1914):

Morality in the novel is the trembling instability of the balance. When the novelist puts his thumb in the scale, to pull down the balance to his own predilection, that is immorality.

FD enacts this dictum in The Pledge at Matthäi’s (and the conventional crime novel’s) expense.

Isn’t he guilty, in doing so, however, of putting his own thumb in the scale to pull down the moral balance the way he prefers it? Or is this in fact just a realistic acceptance of the amorality of the world?

Sean Penn directed a film version in 2001, also called The Pledge, starring Jack Nicholson. If you’ve seen it I’d be interested in hearing your opinion: is it as good as the novel?

9 thoughts on “Friedrich Dürrenmatt, The Pledge”