In my previous post about the first novel in this collection I suggested that Fitzgerald’s skill in evoking sense of place and time in her novels is extraordinary.

In Gate of Angels she presents the cloistered, all-male world of a Cambridge college in 1912. The action is therefore overshadowed by the reader’s knowledge that most of the young men who appear in these pages will be doomed to the slaughter of the trenches, so that the light romantic comedy that’s enacted in the narrative is clouded by this awareness. 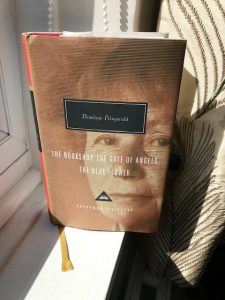 Tiny St Angelicus is a celibate, quasi-monastic college full of Fitzgerald’s usual collection of eccentrics. The plot is a slight affair of the romance that develops between Fred Fairly, a young Fellow, a rational scientist, and the street-wise, penniless orphaned London girl Daisy.

There are some witty glimpses of the exciting and momentous work being conducted by the likes of (future Nobel prizewinner) Rutherford on nuclear fission at the famous Cavendish lab (he became its professor in 1919). There are heady exchanges among the academics about nascent theories in atomic physics and psychology, and the competing attractions of theology and ontology. Fitzgerald has great fun satirising the antiquated beliefs of the more conservative academic scientists as ‘pernicious notions of mass’, ‘substance’, ‘the elementary particle’ and quantum physics develop around them. They refuse to believe in ‘unobservables’. ‘Scientists should not indulge themselves on quite this scale,’ declares Fred’s distressed Professor Flowerdew.

Fred is the son of a rural rector, and in one of the best scenes he returns home to try to break the difficult news to his father that he’s lost his Christian faith (as an uncle of Fitzgerald’s had done with his bishop father; he went on to be a code-breaker who worked on deciphering Enigma at Bletchley Park. Fitzgerald had a colourful family, and their unconventional talents infuse her fiction).

As always with Fitzgerald, things don’t turn out as one might expect. When Fred introduces his family to his Cockney sparrow girlfriend the clash of cultures and backgrounds unfolds with the wit and delicacy of touch characteristic of this clever and sensitive novelist. The scenes in which Daisy struggles with authority figures to become a nurse and raise herself out of grim poverty in London’s slums are vividly and sympathetically done. She’s one of Fitzgerald’s most spirited, unconventional heroines. Her refusal to conform and obey rules tends to get her into trouble – but she wouldn’t be a Fitzgerald heroine if she behaved otherwise.

There’s always a sense that the author is working at a level superior to the light comedy being played out on the pages. The plot is a vehicle for something more serious, elevated and elusive.

I’m not quite sure what it is. Apart from the science/art/philosophy debate noted above, it might be something to do with that Flanders slaughter, that puts into perspective the main characters’ struggles for fulfilment, and the petty squabbles and claret-soaked donnish banter of the college scenes. A seedy journalist gloomily predicts to Daisy that in ten years’ time he’ll be dead – a casualty of the inevitable war that will ensue from the ‘quarrel’ between the King and his ‘German cousin’. Daisy’s skills as a nurse would no doubt soon come in useful. The crazed consultant at her training hospital also runs a hospital near Cambridge for patients with mental illnesses; it’s possible to imagine the place becoming another Craiglockhart soon after the war started.

Several of the older women characters are engaged in another struggle: they’re suffragists. One of them – the intelligent wife of a crusty, unreconstructed don, who’d been a Cambridge student and prominent in the WSPU (like Matty in Lissa Evans’ Old Baggage), but is now a housewife – confronts the bleakness of a life of domestic tedium – all a woman of her class and education could aspire to at the time. Big changes were coming.

Fitzgerald writes novels that fulfil the requirements of the well-wrought plot, peopled by characters with semblances of flawed humanity. Some of the minor players are Waugh-like caricatures, but Gate of Angels is better than The Bookshop. It’s one of her lesser achievements – which means it’s superior to much supposedly popular fiction.

There’s a very good pastiche of an MR James ghost story, narrated by a crusty medievalist don who’s clearly modelled on him. That same uncle of Fitzgerald’s whose father was a bishop was a student at King’s College, Cambridge when James was provost there.

Some supernatural elements in the narrative remind me that Fitzgerald likes a bit of spookiness in her novels (like the antisocial poltergeist in The Bookshop).

Thankfully there’s no film version (as far as I know) of this engaging romantic comedy to spoil the immediacy of Fitzgerald’s narrative deftness.