Following on from yesterday’s post about Oslo, I started drafting a piece for today on the complexities of the languages spoken and written in Norway, but it started to become too academic, so I’ll just stick to more pictures. As the comment from ireadthatinabook pointed out last time, there are two main variants: Bokmål and Nynorsk. Wikipedia has a pretty comprehensive account. 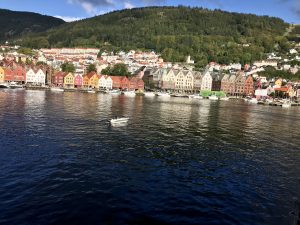 Bergen harbour in the rarity of a sunny day

After three days in Oslo we took the long train ride to Bergen. It’s a pretty harbour town and ferry port surrounded by hills, but less vibrant than the capital – though my son, who’s in the music business, tells me it has a buzzing music scene. 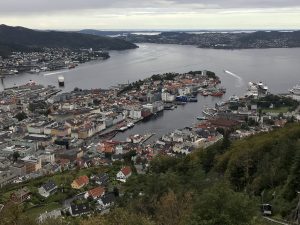 There’s a funicular up to the top of one of them. Great views from the top, and some friendly goats. Friends on social media suggested they’re descended from central Asian cashmere goats. 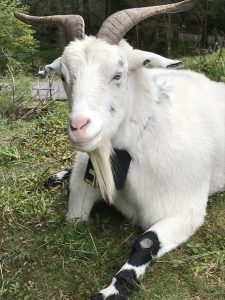 At Bergen we boarded the Hurtigruten ferry which was to take us over seven days right up the western coast of Norway, stopping numerous times – often during the night when we were sleeping. This was not a cruise ship, but a working ferry, used by locals as a more convenient way of travelling north when the roads have to avoid long fjords and wind around mountains.

It had more in common with a night sleeper train than a pleasure cruiser. Such a good way to see the harbours, cliffs and crags of this beautiful west coast. 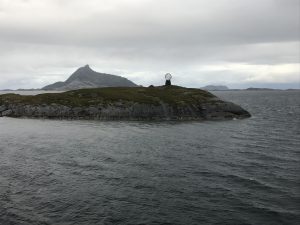 Once we crossed the Arctic Circle the scenery started to become bleaker and more brooding, with skies to match.

Here’s some of the pictures I took; I hope they convey some of the magnificence and atmosphere of this nordic world. 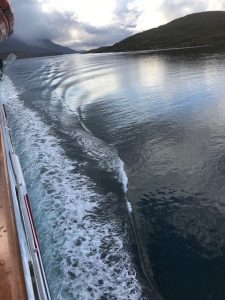 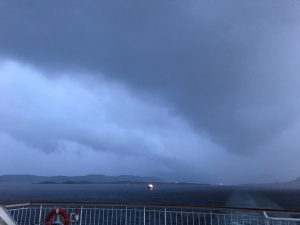 Trondheim Cathedral was built in the middle ages by British masons, which probably explains why its front and design generally look so familiar.

I liked the detail of the Norse monster decorating the edge of the romanesque arch over a doorway. A nice pagan touch on a Christian building, typical of the medieval northern sensibility.

The statue of a whaler in Tromsø is an unfortunate reminder of Norway’s history as a whaling nation. Sadly there was often whale steak on the menus of restaurants.

We did get to see some sea eagles at Honningsvåg on another sunny day. 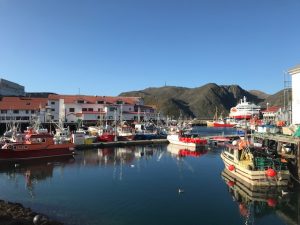 Evidence that it doesn’t always rain in Norway: this is Honningsvåg harbour, with out ferry in the background, with the orange hull. 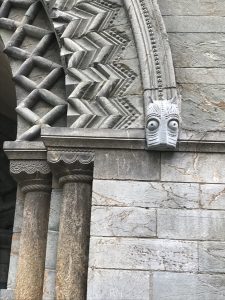 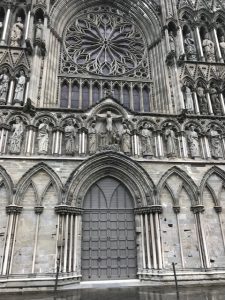 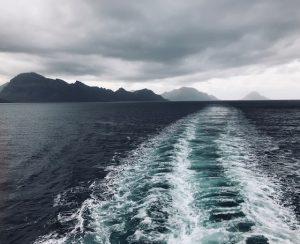 6 thoughts on “Norway 2: Bergen and the coastal ferry”