Karen at Kaggsysbookishramblings and Simon at Stuckinabook are hosting this week’s #1930 Club: do go and take a look at what they’ve been posting, and join in with comments or thoughts of your own on anything from that year that you’ve read and want to share, here, and/or on their blog sites.

I’m just past p.1000 of Uwe Johnson’s massive Anniversaries, so don’t have plans to start a new book from 1930 while immersed in that, but didn’t want to let this week pass without some sort of contribution, so here we go, with two posts from the archive. 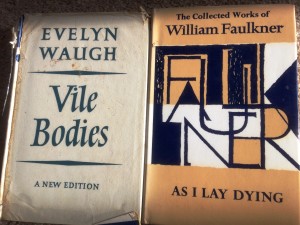 My ex-library hardback edition is rather battered but has an appropriately abstract cover design; Vile Bodies (also been bashed around when in a library, rescued by me from a bin) I read pre-blog, so although it’s another 1930 publication I can’t link to it here

First is William Faulkner’s As I Lay Dying (link HERE), first posted in 2013. This was Faulkner’s fifth novel, and is a high modernist, fragmented narrative account (fifteen different narrators, each with a distinctive voice and idiolect) of the Bundren family’s difficult quest to carry the body of matriarch Addie to her people’s home cemetery at Jefferson, some 30 miles north of the Bundren farm. Neighbours think this is a crazy scheme, but ‘pa’ Anse insists he’d promised his wife that her dying wish would be fulfilled.

Faulkner himself called it a ‘tour de force’: it’s maybe not a modest claim, but well justified.

Others have posted this week on my second #1930Club 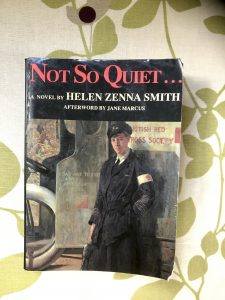 choice from the archive: Helen Zenna Smith’s novel Not So Quiet… My post was from the summer of this year.

It’s her riposte to Remarque’s similarly titled All Quiet On the Western Front, and deliberately foregrounds the experience of a female ambulance driver in the horror and carnage of WWI near the front lines. It’s one of the most compelling, unflinching accounts of that terrible war that I’ve read.