It’s strange to think of Ivy Compton-Burnett (ICB for short) turning out these exquisitely fashioned country-house-of-the-gentry novels set in the late Victorian or early Edwardian period (families drive to the train station in carriages) in the middle of the twentieth century. They seem a throwback to Trollope’s world, not that of the Battle of Britain.

As always with ICB, most of the text takes the form of long set-piece conversations, most of them in dining or drawing rooms. The speakers reveal through their dialogue the ties and fissures, the tensions, frustrations, oppressions and cruelties lying not far below the surface of the family’s apparent gentility – for ICB is always exposing with unwavering precision the dynamics of families that are more or less dysfunctional. 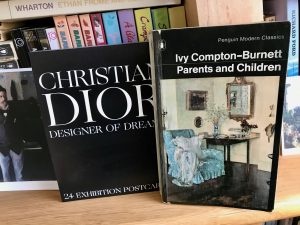 The painting on the cover of my battered old paperback is from ‘Interior’ by L. Campbell Taylor

Parents and Children is particularly concerned – as the title suggests – with the impact on offspring of their parents’ upbringing, their capacity for showing, sharing or withholding love, their tendency to keep important secrets, or to impose upon their children constraints that develop or deform them emotionally.

The central location is the huge country house inhabited by middle-aged Eleanor Sullivan, her barrister husband Fulbert and their family of nine children (ICB came from a large family herself, and knew how they formed mini alliances and animosities). The house is owned by his elderly parents, Sir Jesse and Lady Regan, which creates another level of tensions.

Eleanor is made to feel keenly that she is not the mistress of the house, while Fulbert is also uncomfortably aware that he is only the heir because of the death of his elder brother. This is conveyed early on in a typically acerbic character appraisal usually provided when a character first appears (when she allows them, ICB’s taciturn narrator makes these portraits stingers):

The two women lived in a formal accord, which had never come to dependence; and while each saw the other as a fellow and an equal, neither would have grieved at the other’s death.

Fulbert strives for recognition and affection from a father whose attitude is distant, high-handed and judgemental – not just towards his only surviving son, but of his grandchildren and their mother and other dependents on the estate.

There are numerous scenes in which these children (ages range from three to brothers in their final year at Cambridge; as ever they are all impossibly precocious and articulate) are seen with their governesses. Neville, the baby of the house, is meant to be charming, I think, with his habit of speaking of himself in the third person. I found there was a little too much of him.

In another of those narrative portraits of newly arrived characters, here’s when the two oldest sons appear; Graham, 21:

He had a deep, jerky voice and a laugh that was without mirth, as was perhaps natural, as he was continually called upon to exercise it at his own expense.

Daniel, 22, constantly snipes spitefully at his languid, maligned brother, who (as younger brothers do in this situation: I know, I am one) bites back with knobs on. Daniel’s antagonism arises from his being more conventional and assiduous in his attitude to filial responsibility (at the novel’s end we learn he gets a first, while Graham scrapes a low third class degree – both seem unsurprised by and content with this outcome). Most telling at this point in the narrative about the parental view of this corrosive sibling rivalry is this insight into their mother’s gaze upon them when they first enter the room to join their parents:

Eleanor surveyed her sons with affection, sympathy and interest, but with singularly little pride.

There’s a dark secret at the heart of the family, and several revelations and reversals emerge unexpectedly. Rather as in a detective mystery, details only make complete sense when the narrative is read a second time; clues and hints then take on a deeper significance.

The novel’s familial theme is clear – though it’s difficult to quote illuminating extracts from ICB’s fiction, because every detail is connected like a thread in a web to what goes before and after it in the narrative. Here’s one passage that’s particularly pertinent.

The family have been more than usually strained by the imminent departure of the father, Fulbert, on a six-month business trip to South America (at the orders of his exigent father). The children have been more than usually unsettled and testy. Their mother, Eleanor, has upbraided them for openly showing their honest, ‘natural selves’, when the released emotions would be better kept ‘disguised’. The ensuing emotional explosion causes her own attitude to be criticised by the older children, who see her as having ignited this ‘inflammable material.’ Luce, the perceptive, intelligent eldest daughter (she’s 24), sighs:

“Dear, dear, the miniature world of a family! All the emotions of mankind seem to find a place in it.”

“It was those emotions that originally gave rise to it,” said Daniel. “No doubt they would still be there.”

It’s the brilliance of the author’s depiction of characters interacting with each other, with disgruntlement, venom and spite barely concealed beneath the veneer of sophistication, that makes an Ivy Compton-Burnett novel such a rewarding read. Look out for moments when the narrator tells us something about a character’s expression or gaze: who they turn their eyes on, in what manner, what response they get.

An example of this shortly before the final crisis: a shocking piece of news has been delivered that’s upset the equilibrium of the whole family, and historic secrets are in danger of being revealed.

“We have our memories,” said [grandfather Sir Jesse].

“Yes, you can add to them a stock of those.” [This is said by his wife, Regan]

[Eleanor enters, and a frisson is felt in the room’s emotional temperature:]

In a similar way, there’s a deeper significance than the narrative reveals on a first reading in the messages conveyed by a photograph of a loved one: what is shown, what concealed or not perceived by those who look at it.

Adult characters are usually less than transparent in what they disclose about themselves and their true feelings; this means the reader has to slow down and consider the implications of every speech. It’s worth making this effort.

It would be easy to dismiss or dislike this technique as being too contrived: people “don’t speak like that in real life”. But the witticisms and epigrams serve multiple purposes. I’ll finish with one example.

Eleanor wonders if the governess Miss Mitford has noticed it’s stopped raining, and the fractious children could be sent with her outside to let off steam more harmlessly:

“She [Miss Mitford] does not notice anything when she is reading,” said Venice [aged 13].

“Does she do nothing but read? I hope she will not teach you to be always poring over books. There are other things in life.” [this is Eleanor, their mother]

“Not in every life,” said Graham…[In the next exchange he’s sarcastic about her rose-tinted view of her children’s happiness, especially considering his complex, timid little brother James – even more put-upon than he is; Eleanor is affronted at the suggestion that James is ‘a pathetic character’]

“Graham dear,” said Luce, in a low tone, “things can only be done by us according to our nature and our understanding. It is useless to expect more. We can none of us give it.”

“That does not take from the pathos. Indeed it is the reason of it.”

“It is partly the ordinary pathos of childhood, Graham.”

“Of childhood in the later stage, when it is worked and confined and exhorted. For its weakness the burden is great.”

“James has his own power of throwing things off,” said Luce.

“Of course all my children are tragic figures,” said Eleanor.

I said it’s hard to quote briefly to convey the richly textured subtlety of ICB’s prose. She’s a master of the suppressed.

There’s a link HERE to other ICB novels I’ve posted on.