Another book recommendation from Mrs TD was Where the Crawdads Sing, by Delia Owens (Corsair paperback, 2019; first published in the US in 2018). I was sceptical when I started reading, thinking it was turning into a fictional misery-memoir/romantic murder mystery (not a particularly digestible mixture). Mrs TD said to persevere. 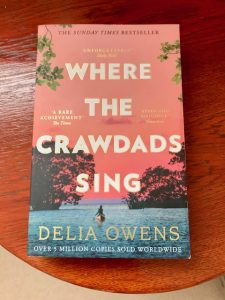 I did, and found myself enjoying it. The murder mystery is quite tightly plotted, and there’s a colourful depiction of Kya, the young protagonist whose abusive father drives all her siblings and even her loving mother away from their squalid shack in the middle of a North Carolina coastal swamp. When the father abandons her too, when she’s only about ten years old, she learns to fend for herself and develops a fierce independence, tempered by a fear of being taken in by the authorities. Their success in getting her briefly into a school teaches her only that she was right to be wary of ‘civilisation’.

The romantic part of the novel is a bit contrived, I thought. Kya is a sort of Little Mermaid figure, out of her element in the world of ordinary people, as they are in her world. They call her disparagingly ‘The Marsh Girl’, and spread rumours that she’s feral and dirty.

But she still falls in love with one of the young men from the nearby town, and he with her. As with the mermaid, their story is fraught with danger and difficulties. The complication involves another relationship that veers badly out of control for her.

The strongest aspect of the novel is the vivid realisation of the natural world Kya is so at ease in. Owens has previously published non-fiction in her role as a wildlife scientist in Africa – this is her first novel. Her naturalist’s expertise is well deployed without becoming too intrusive. She’s able to make the reader see and hear the birds, insects and other animal and vegetable life in the teeming, lush swamp.

Kya also reminds me of Mowgli, more at home among the wildlife than with humans. The gulls are her closest friends. The herons watch her with curiosity and fearlessness. The swamp creatures copulate with and eat each other with heedless abandon. Some of this (a little crudely) points up what’s going on in the human story.

I suppose it was an ideal escapist read for these trying times. I’m still struggling to engage with more demanding reading; this novel provided an insight into a completely different and unknown world.

The language often had me turning to Google: local terms like ‘hush puppies’ (not the uncool shoes), ‘po’boys’ and ‘crawdads’. These are crayfish, and the expression in the title about where they sing is a local saying for something like ‘over the rainbow’ or ‘back of beyond’, because of course crayfish don’t sing. I don’t think they do. 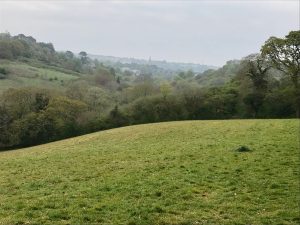 Just to finish here’s a picture from my walk early this morning. The recent sunny weather has been replaced by grey and cloudy skies mostly for several days here in Cornwall. This is the view towards the city from a field a half mile or so from my house. You might just be able to see through the haze the spire of the cathedral, piercing the horizon in the middle of the picture. The Carvedras viaduct that I wrote about here recently is also just about visible towards the right.

Yesterday we made a rare trip to the supermarket to buy provisions for ourselves and an isolated neighbour. Only one person per household allowed in at a time, so I prowled the carpark while Mrs TD did the food shopping (we take it in turns). The timing was good: I saw the first house martins of the spring, two of them slicing the sky over the rooftops in scimitar swoops.

Also spotted in the carpark: a middle-aged man in rock-star shades parked an enormous blue Bentley. A few minutes later the young security guard who’d been supervising the socially-distanced queue walked up to the car, opened its doors with the keyfob remote, and started taking pictures with his phone camera. He told me he’d praised the car to the owner as he entered the store, and the guy handed over the keys and told him to go take a closer look. “Really?” the young man asked. “Sure,” said the man. “It’s only a car.”

This young man was so excited he FaceTimed a friend and filmed himself in front of the car, and sitting in its opulent leather seats. “It’s like driving your lounge,” he beamed at me. He couldn’t believe the owner could be so offhand about handing him the keys to this expensive car the size of a battleship. It made his day – and (with the house martins even more so) mine.

14 thoughts on “Crawdads, house martins and a Bentley”