I’ve mentioned in previous posts about my rural walks with Mrs TD during lockdown that we’ve noticed little art objects left where walkers will see them. It turned out that the maker of these fairy houses, painted pebbles and so on was John Rowe. He told me in a comment that it was his way of commemorating a loved one, and of brightening the world in his memory. It seems to me as well that he’s celebrating humanity and the natural world.

From the back of our house we look over the river Kenwyn, which runs through a wooded valley into the city and the sea beyond. We often walked our dog along the banks, but haven’t done this walk much since she died. But we have noticed new wooden handpainted signs indicating this woodland, riverside walk. Locals have posted pictures on social media of little artworks that are obviously John’s work. 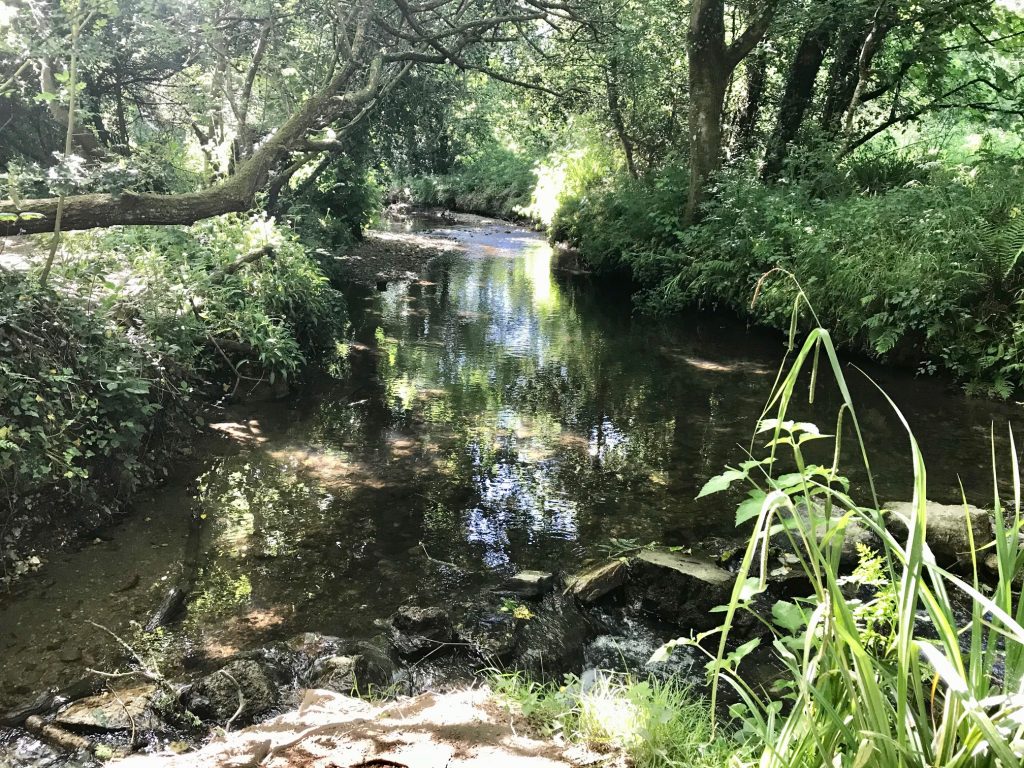 Not so long ago we passed a walker and got chatting about these lovely natural artefacts. He was John’s brother. He told us a little more about the project. He and his brother are keen birdwatchers. This would explain the delightful, brightly coloured images of kingfishers, perched on a branch above the rippling current of the river, dappled by bright sunlight under the canopy of trees.

When Mrs TD and I were walking home yesterday we noticed a city parks truck parked by the roadside. A young couple were walking back to it; he was wearing a city parks teeshirt. Mrs TD asked him if he was responsible for the recent arrivals in this little parkland area: a bug hotel, a walkway fringed by twigs and branches, bordered by wild and garden flowers; a bench beneath a bower of arched, living willow (I think); piles of logs that serve as havens for wildlife.

Yes, he said, this was all his work. He told us he’d also worked on developing the riverside woodland trails. His girlfriend had helped him with the design. They were a charming pair, and his delight and satisfaction in his job were palpable. He’d moved to Cornwall to be with his girlfriend, and was looking for any work he could find, but managed to get this one in his own field: forestry and parks. He couldn’t have been happier. What a lucky pair. And what a great job they’re doing. 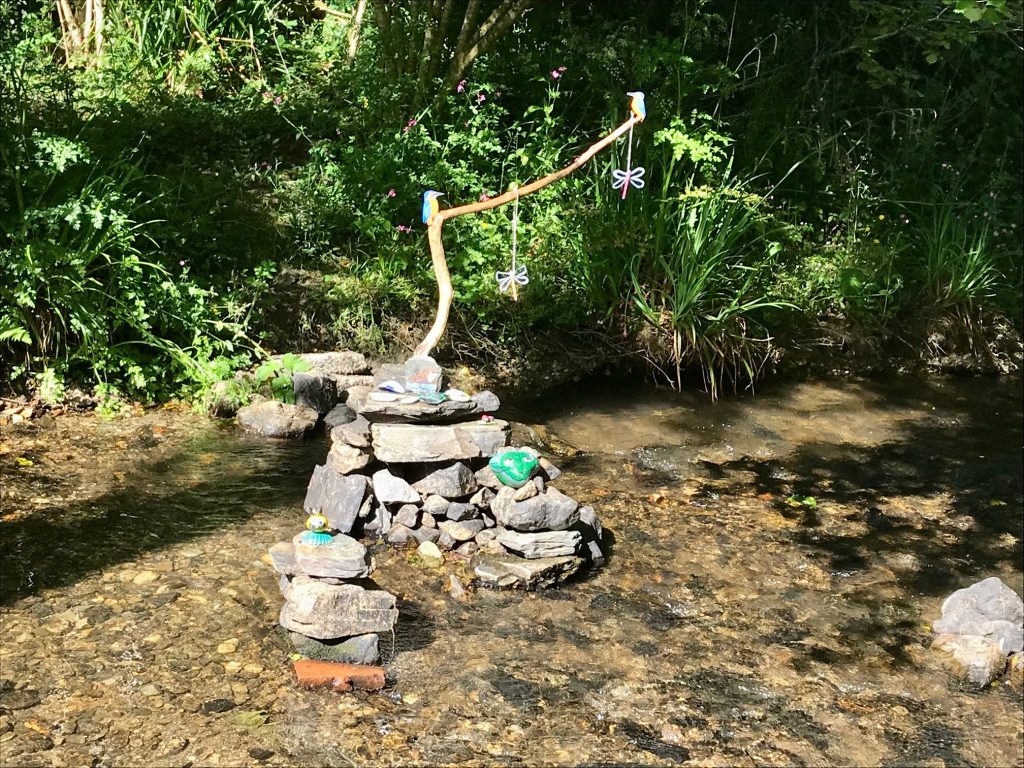 So we took the riverside path for the first time in maybe a year. He’s done a fine job, and it was a perfect day to admire what he’d done. The sunlight was bright, and the river gleamed like a jewel. It’s shallow, because we’ve had so little rain this month.

The images of kingfishers are John Rowe’s work. The young man we spoke to said he’d chosen that spot because it’s near where kingfishers nest each year. I’ve yet to see a living kingfisher along this stretch of river, but Mrs TD has. I was going to say a little more about the legends around kingfishers, but maybe more about that next time.

On a sadder note, we decided for the first time in over two months not to join in the ‘clap for carers’ at 8 pm on Thursday. Not because we no longer value the contribution of key workers like delivery people, postal workers, shop workers, and all those who’ve continued while the rest of us are isolated, furloughed and socially distancing. We simply feel that it’s become a way of distracting attention from the need to reward and value such workers properly, with decent pay and safe working conditions.

I won’t start another rant about the despicable Cummings, but that affair, and the shameless, immoral rush to protect him by the PM and his senior ministers, has put us off any public display of solidarity with an initiative they endorse. I prefer to thank my postman, people who deliver parcels, checkout staff at the shops, and so on, in person.

Our daughter works in the NHS (they’re not heroes; they’re committed, caring and dedicated – qualities our leaders would do well to discover). Many staff at her hospital, as in the rest of the country, have become infected with the virus. She was tested earlier this week. We all spent a couple of worrying days waiting for the result. Fortunately it was negative.

It shouldn’t have taken nearly three months for her to get a test.

People like her need much more than our applause: they need proper protective equipment and less exhausting patterns of work. Paying them a decent wage and giving them better working conditions would also help. The public sector in this country has been starved of funds for a decade, which is partly why we have the second highest death rate from C-19 in the world, and one of the worst rates of mortality per capita. Bragging about ‘world-beating’ test and trace systems (which have still to materialise) doesn’t make it happen.

OK, kingfishers next time, and no politics or viruses.