Anna Summers is a product of the convention-bound world of Old New York:

In the well-regulated, well-fed Summers world the unusual was regarded as either immoral or ill-bred, and people with emotions were not visited. 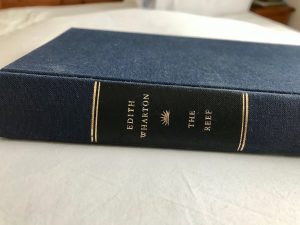 She’s aware of feelings and romantic aspirations deep inside her somewhere, but as a young woman under the influence of her parents and their prim social set, such stirrings would be considered improper. She has learned to regard ‘the substance of life’ as:

A mere canvas for the embroideries of poet and painter, and its little swept and fenced and tended surface as its actual substance. It was in the visioned region of action and emotion that her fullest hours were spent; but it hardly occurred to her that they might be translated into experience, or connected with anything likely to happen to a young lady living in West Fifty-fifth Street.

Only love, she believes, could release her from ‘this spell of unreality,’ and construct ‘the magic bridge between West Fifty-fifth Street and life. George Darrow seems the ideal candidate: she feels an impulse of passion for him – but she’s incapable of indulging it, or to abandon the social poise and self-effacing tact so prized in her world. Darrow wants to kiss her, but she wants to talk to him about books and art. He turns to shallower, more compliant young women for dalliance, leaving Anna to berate herself for being so ‘cold’, such a ‘prude’. Being considered by envious mothers of such unbridled young women in her social set as a ‘model of lady-like repression’ is little consolation.

It’s difficult to say much about the subsequent plot without spoilers. On the rebound from Darrow, Anna marries another American, a dull, conventional bore called Leath. He takes her to live in a dismal French chateau that’s a ‘symbol of narrowness and monotony’. His widowed mother lives there with them, a representative of ‘the forces of order and tradition.’ Anna has chosen badly if she expected a fulfilled life. One set of desiccated conventions is replaced by another, older one.

Her trapped existence worsens: she’s desperately lonely and emotionally trammelled, even after the birth of her daughter. When her husband dies, Darrow re-enters her life after a twelve-year gap, and their romance seems set to resume – except this time she’s steeling herself to act more spontaneously, kindle her repressed sexuality, and not drive him away again with her unresponsiveness. Then all kinds of complications set in.

The title of the novel reveals that their love will not sail smoothly. The opening words indicate another kind of reef: ‘Unexpected obstacle.’ Anna has sent him a telegram just as he sets off by train from London to visit her in France. He’s frustrated and angry at yet another apparent snub from her. When a pretty young ingénue crosses his path, history repeats itself, and he turns (with rather cynical and calculated selfishness) to this natural, vibrant spirit, who acts with all the spontaneity, sensuality and joy of living that Anna so palpably fails to access or unleash in herself.

What follows is a slow-burning modern tragedy. Can love flourish when it hits the reef of distrust and infidelity? The more Darrow ducks and dives to avoid wrecking the fragile, sinking relationship with Anna, the more his lies and evasions smash her faith in him – and in love.

The Reef was much admired by Wharton’s friend Henry James, and it’s been described as her most Jamesian novel. It is, in the sense that there’s almost no surface ‘action’; the narrative consists largely of dialogue which the reader has to fathom delicately. Hardly anyone speaks their mind. True feeling is largely unspoken. All is (as Darrow himself puts it at one point), nuance. What lies beneath this apparently calm, sophisticated surface turns out to be the reef.

The first part of the novel is focalised on Darrow, and it’s his urbane world view that positions Anna as difficult and repressed. Then Anna’s consciousness takes centre stage (the novel has been filmed, though I haven’t seen it; it would lend itself, I’d have thought, to dramatization). I found myself sympathising increasingly with her as she struggled to overcome her inhibitions, to go with her instincts instead of her will for once, and to forgive Darrow his ‘moment of folly’, a ‘flash of madness’ with the young woman he’d met on his thwarted trip to visit Anna at the start of the novel.

She recoils from his glib self-justifications when he finally confesses. His masculine excuses are ‘a vision of debasing familiarity: it seemed to her that her thoughts would never again be pure.’

She wondered at his composure, his competence, at his knowing so exactly what to say. No doubt men often had to make such explanations: they had the formulas by heart… A leaden lassitude descended on her. She passed from flame and torment into a colourless cold world where everything surrounding her seemed equally indifferent and remote. For a moment she simply ceased to feel.

Poor Anna. Just as she’d let go and started to allow herself to feel, he accuses her of being ‘too hard’ and ‘too fine’. The imminent wreck of their romance is all her fault, then. But the novel doesn’t end there.

I’ve posted about nine other works of fiction by Edith Wharton: link HERE

12 thoughts on “Surface and substance: Edith Wharton, The Reef”