The work project started in the late summer has kept me from posting for a while. I intended catching up today with recent reading, but first I wanted to share some autumn thoughts, images and colours. All the pictures were taken on walks over the last couple of days. 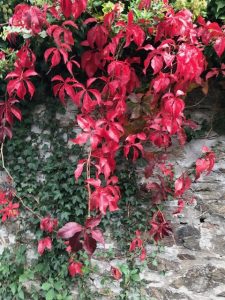 The word ‘autumn’ is one of those strange spellings, with that silent ‘n’ that either delights or annoys, depending on your view of orthographical vagaries in the English language. Here’s what the OED online has to say about its etymology, which partly explains how it came about: 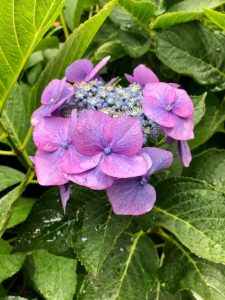 So there also used to be a ‘p’ as well as an ‘n’ in there! Nothing to do with the usual culprits, those 18C “grammarians” who thought it was a good idea to insert a bit of Latin conformity into the totally different structures of English, hence ‘no split infinitives’, a ‘b’ in the middle of ‘debt’ (to align it spuriously with its Latin source, ‘debitum’), and so on.

I suppose the literary text we most associate with this season is the ode by Keats, with its famous image of personified Autumn:

I remember at an undergraduate lecture hearing Prof. Ricks using this as a marvellous example of using the movement of the reader’s eye and imagination over the line to its break and resumption on the next line as a sort of visual metaphor to enrich the verbal/pictorial image. This personification is one of a list of them in the second stanza: the young woman (= Autumn) steps over the brook (perhaps on stepping-stones?) and balances her burden of fruit on her head as she does so. The lines reenact the ‘steadying’ motion of her stepping over.

When I checked the poem I realised I’d forgotten that the image begins with ‘like a gleaner’. So it’s a simile: the image of an image.

Here’s another hydrangea, bronzed and burnished by the cool air of autumn so that it looks almost metallic: 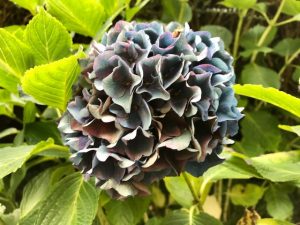 In some of my lockdown posts about rural ramblings I mentioned the good work done by our city’s ‘countryside ranger’. He’s created some lovely woodland walks locally, and these have become very popular with the community.

Some members of this community have started decorating the walks with artworks and ‘fairy houses’. These charming constructions by a local man called John Rowe can be seen on the Facebook group called ‘Fairy doors of Malabar and Coosebean’ (the names of local areas). They’re a huge hit with local children – and adults. I’ve mentioned them (and posted pictures of other artworks) here before.

Here to finish this post are some images of my walk through one of these woods yesterday, and one of a local artist’s pictures, aptly framed in rustic, salvaged wood. According to one of the ranger’s posts in this group, the print is one taken from a sketchbook by Jean McNaughton: 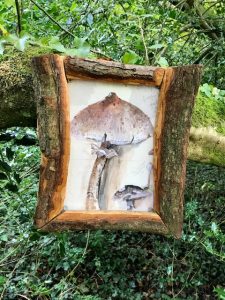 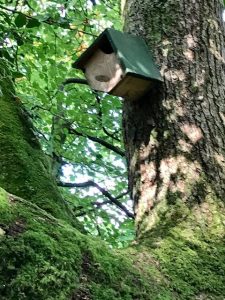 This nesting box high in a tree has an unusually large entrance: maybe for owls? Or very large bats?? 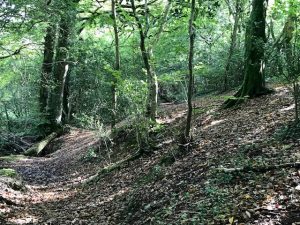 The sun was dappling through the leaves not yet fallen when I took this; half an hour later it poured with rain! 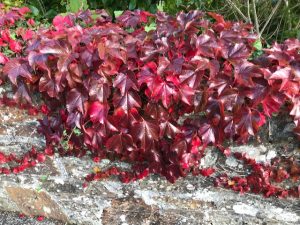 This virginia creeper grows on a garden wall at the end of our road. This was taken this morning.