Bunny (nickname of Peter) is a timid boy aged eight, who cries easily, is bullied by the local lads, and is wary of his bossy big brother, Robert, who’s thirteen. He’s sent on an errand to the local shop:

Mrs Lolly was middle-aged and sagging, like her porch. She kept a yellow pencil in the knot at the back of her hair…[She] added up figures on a paper bag. When she stopped and looked at him blindly, Bunny saw that her eyes were full of arithmetic. 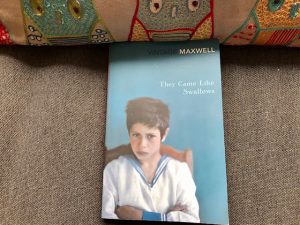 Maxwell’s short novel is all written as well as that. This first section is narrated from Bunny’s point of view, reflecting his devotion to his mother, love-hate relationship with Robert (an age gap of five years is a lot at that age), and his father’s severe aloofness.

It’s set in Illinois in 1918, and the post-war Spanish flu is spreading. Bunny falls seriously ill with it. As the novel progresses, with a second section narrated from his big brother’s viewpoint, and a final section focusing on the father, others fall sick, and the serenity of the family is shattered.

It’s a beautifully observed, deeply moving account of the dynamics of this small family. The other significant member is the beautiful aunt Irene, bohemian and exotic, adored by Bunny. Her marriage is on the rocks, and she’s torn between letting her feckless husband have another chance, and doing the sensible thing.

This is the third Maxwell novel I’ve read; two of them brilliantly portray the inner lives of boys – this one and So Long, See You Tomorrow – link to my post HERE. The other, The Château (link HERE) was less compelling: I found it a little over-written. Maxwell is at his best when he keeps the prose low-key, as he does in Swallows, while developing scenes with some unbearably powerful emotion in play.

The title is from Yeats’s poem ‘Coole Park, 1929’, a stanza of which serves as the novel’s epigraph. One line describes ‘a woman’s powerful character’ – Bunny and Robert’s mother, the keystone of this fraught family, would fit that description.