Not many novels make me laugh, but this one did, many times. Its narrative form is a sequence of entries in increasingly expensive notebook diaries written by its precocious 17-year-old protagonist, Cassandra Mortmain. They are quirky, intimate and ‘consciously naïve’ (as she’s piqued to overhear herself described as by one of the potential suitors who come on the scene). 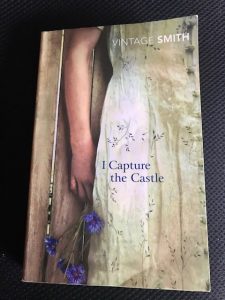 The plot is a sort of mash-up of romantic-Gothic-silly aspects of Pride and Prejudice, Jane Eyre and Vanity Fair’s Becky Sharp – all of which are name-checked. The Mortmains are penniless, barely subsisting in their crumbling castle. The sisters’ negligent blocked novelist father spends his time shut in his room reading trashy detective stories; their stepmother is a flaky, impractical bohemian/It Girl (the novel seems to be set in the thirties).

Cassandra is shrewd and decent enough to despair of her pretty older sister Rose’s over-obvious flirting with the eligible rich American boys who take over the big house (and also become her family’s landlords – though they never pay rent). As gold-digging Rose admits early on, she’d ‘marry the Devil himself if he had some money’. But Cassandra is young, romantic and coquettish enough to fall for one of the young men herself.

These contrived entanglements are perhaps strung out too long, but it’s worth sticking with the novel for its constant stream of the ingenuous Cassandra’s humorous observations arising from bizarre situations in and around their crumbling castle. Some of these scenes try too hard (as when Rose is mistaken for a bear), but usually they work. Here are some tasters:

[Cassandra at the start of the novel is pondering what she and sister Rose are to do for money] Surely there is enough intelligence among us to earn some, or marry some – Rose, that is; for I would approach matrimony as cheerfully as I would the tomb and I cannot feel that I should give satisfaction.

[The sisters have met the wealthy young Americans, and Rose has caught the eye of one them; her mercenary hopes are raised, and they decide to pray in earnest, as they go to bed one night, that Rose will genuinely fall in love with him so that she won’t be a miserable rich wife. Cassandra finishes her prayers, but Rose carries on longer] ‘That’ll do, Rose,’ I told her at last. ‘It’s enough just to mention things, you know. Long prayers are like nagging.’

Some good news for once: Mrs TD and I had our Pfizer vaccinations yesterday – no ill effects or discomfort so far, and all was well organised at our local doctors’ surgery. It’s the first thing the British government has managed well since the pandemic started – though the success of the rollout of vaccines is largely down to the energy and dedication and professionalism of the NHS staff and the volunteers who’ve assisted with the practicalities.

Mrs TD has applied to be one of those volunteers. She was very excited this morning when her high-viz tabard arrived in the mail. She intends to wear it everywhere, even though she hasn’t yet been called to help with the vaccination programme.

I’ll close with some remarks about recent walks. One cold day last week, while Mrs TD had her Zoom yoga class, I went out alone. On a remote lane, high on a hill where the wind was bitter, a well-wrapped-up man passed me: ‘Fresh this morning,’ he said.

This lingered with me for some time. One of those expressions that’s so context-bound. It could have been said by a fishmonger or greengrocer, extolling the qualities of their wares to a potential customer. 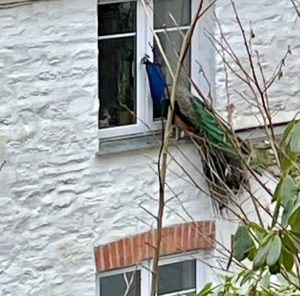 Another day, another walk, the two of us this time. We passed the smallholding where the group (flock?) of peacocks live; I’ve posted about them several times since our lockdown exercise walks became routine. Mrs TD took this picture of one of the birds perched on the sill of one of the house’s upstairs windows. It was peering in, indignant but also a bit desperate.

I often pass these stones. They lie in a field by the footpath – sheep are 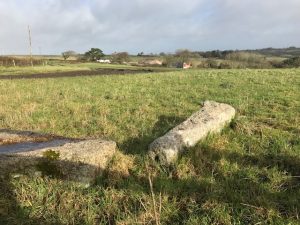 grazing there at the moment. They look a little forlorn, like a small, derelict Stonehenge. The sun that day cast shadows that made the scene even more desolate than usual. 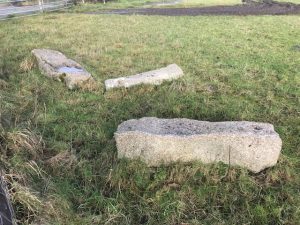 16 thoughts on “Dodie Smith, I Capture the Castle – and recent walks”