I’ve read one Elizabeth Jane Howard novel, After Julius (link to my post HERE) – a rather melodramatic tale of tangled, thwarted love. I also know of her as the author of the four much-praised Cazalet novels, about the lives of middle-class characters, with the focus on the women (from what I’ve read about them). I was not expecting the hair-raising ghoulishness of two of the stories in this collection, therefore. 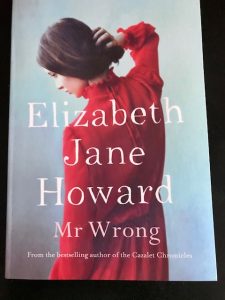 The title story, ‘Mr Wrong’ is about a car bought second-hand by a nervous, lonely young woman called Meg; it turns out to be haunted by a gruesome murderer and his victim – who starts to come after the callow, vulnerable new owner. The narrative and the story’s  title subvert with grim relish the trite social assumption that all a reserved young woman like Meg wants or needs from life is ‘Mr Right’.

‘Three Miles Up’ is like a nightmare version of those cosy tv programmes in which minor celebrities chug along picturesque canals in narrowboats. The two men in a boat invite a mysterious young woman to join them – they find her apparently asleep by a tree on the canal bank. Things then take a decidedly spooky and sinister turn as they decide to explore an overgrown branch canal that’s not on any of their maps.

After a bit of searching online I discovered that EJH had worked as a secretary for the Inland Waterways Association. This was a charity devoted to the conservation and promotion of Britain’s canals and waterways that was co-founded by Robert Aickman, the writer of supernatural ‘strange stories’, and with whom she had an affair. This liaison also led to her contributing these two stories and one other to the collection We Are for the Dark (1951), to which Aickman himself added another three. Interesting that she should create such vastly different genres of fiction.

Although none of the other seven stories in Mr Wrong have a supernatural element, several are quite acrid in their depiction of disastrous marriages and other relationships. Spouses have affairs and fight with their partners; parents neglect their children. ‘The Whip Hand’ has a monstrous controlling mother of a child performer who shows signs at the end of becoming nastier than her mother.

In ‘Child’s Play’ a spoilt 18-year-old newlywed returns home after a row with her husband to seek solace from her doting father, who turns out to be a serial philanderer. Father and daughter treat the mother, Kate, with contempt.

This story has a nice vignette of the family’s appropriately sociopathic cat bringing a mouse into the kitchen, and ‘forcing’ Kate ‘to meet her glassy, insolent gaze’. It then ‘began to crunch it up like a club sandwich’:

She liked Kate, in a limited way, to share in her triumphs. In ten seconds the mouse was gone, she had drunk a saucer of milk, and was polishing her spotless paws. She kept herself in a gleaming state of perpetual readiness – like a fire engine.

Even the cat has an agenda in this twisted family drama.

Only one story, ‘Summer Picnic’, has a gentler tone, and it provides a welcome respite from this sequence of stories about edgy, tainted lives and loves.

I found some of the perceptions of and assumptions about sexual relations in After Julius disturbing, and these misgivings recurred in reading some of the stories in Mr Wrong. In ‘Toutes Directions’, set in the south of France, there’s a sex scene in which the reader seems to be expected to find the young woman’s submission to a man she’s just met as a kind of epiphanic liberation. Maybe I’m misreading, but I thought it not far removed from rape.

Although the stories are technically quite good, I didn’t much care for the author’s attitudes to her characters and their world of tension. The amorality and caustic misanthropy are depressing and borderline morbid. 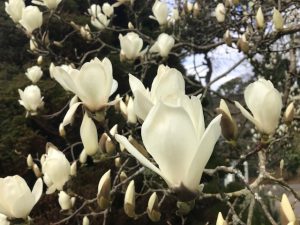 I’ll lighten the mood with a picture taken the other day in a local park – the first magnolias there this spring. My tree is still in bud.