This is another of those books that doesn’t sit neatly in the category ‘novel’ or ‘(auto)biography’, or even ‘(auto)fiction’. Sybille Bedford’s account (the title page has it as ‘a biographical novel) of her early family life – she was born in Germany in 1911 – until early adulthood in the 1930s is described in her Afterword:

Truth here was an artistic, not a moral requirement – truth to be presented in the terms of the novelist, not the biographer, terms that meant timing, selection, avoiding repetition. 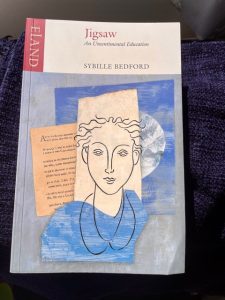 She goes on to account for the ‘sisters’ story’ –  of the two women originally from Berlin whose lives form ‘a counterweight, a link between the English and the French action of my jigsaw.’

This novel is then an artefact, assembled fragments to represent a likeness as the author saw it in ‘writing about myself, my feelings, my actions.’ Much as she was tempted to leave out the substantial part played in her early life by her mother (‘Did one have to have a parent?’ she enquires wistfully, playfully in this Afterword), her story inevitably lingers in most of its pages on the significant impact on those feelings and actions by her glamorous, impetuous, intelligent, exasperating mother.

The short first section is poignant and funny, mostly about her early childhood in Germany with her eccentric, solitary father, barely subsisting in the grand but desolate, threadbare castle he’d been left by his wife when she’d had enough of him and took off to pursue love affairs, exotic travels and a more stimulating life:

[My father] could not stand clever women. (My mother had been too beautiful for him to notice that she was one and when he did notice it was too late.)

This German part of his family is called Merz in Bedford’s excellent novel (published 1956) about them, A Legacy (my posts about it HERE). She’s sensitive and perceptive in portraying his character and how she portrayed it to suit her novelist’s purpose there:

Jules in the novel is a man by no means originally devoid of feeling, whose contact with reality is snapped by events at one or two points in his life. He protects himself by limiting his grasp. A man who has lost his nerve…in the context of a particular time and the changes in that time.

Subsequent sections of the novel follow the protagonist after the early death of her father. Her mother marries a handsome Italian much younger than herself, and has little time for the precocious, bookish little girl she hardly knows, so she is tolerated for a sequence of summer breaks in various rented villas in Europe, usually by the sea. Her mother is restless, romantic, feckless. The daughter is educated fitfully, mostly at home or with dubious tutors.

Much of the time she is farmed off with equally bohemian friends in England, living hand-to-mouth, but still spending summers in Italy. The most substantial part of the novel is set in the place where her mother finally settles: Sanary, on the coast of the (then unfashionable) south of France. It’s a quiet place, favoured by itinerant foreign artists and intellectuals, like Aldous Huxley and his wife, and the exotically glamorous couple called here the Desmirails (not their real name). Young Billi (as Sybil was called by those close to her) develops an adolescent crush on Oriane, the glacially beautiful, art deco wife.

The final section is very different in tone. Sybil’s mother develops a drug addiction, and her daughter and young husband struggle to cope with the demands this places on the household.

The novel is uneven in quality; at times I became frustrated with the ingenuous depiction of the sybaritic ways of people one wouldn’t really want to meet: they’re usually broke, but always seem to manage to employ a ‘femme de ménage’, and to eat out and drink in café-bars. I suppose the author is adopting the viewpoint of the inexperienced young woman who didn’t know that the behaviour of her mother and her circle was selfish and neglectful, as well as exciting and unpredictable. It’s a wonder Billi survived.

I have quibbles with the prose style, too. Mostly it’s well written – rather patrician and slightly dated (the novel was longlisted for the Booker the year it was published, when Bedford was 78). But there are defects, especially a feature that Orwell hated, and I found irritating: Bedford’s habit of using unnecessary and intrusive double negatives – there must be a dozen of them, like this one chosen at random: a friend of young Sybil is having an affair with a judge who is said to have ‘a not insubstantial private income.’ That would be a substantial one, then.

Another character spends a part – ‘a not unlively part’ – of his time at a particular artists’ haunt; maybe I’m just fastidious, but what’s wrong with calling it ‘a lively part’?