I was intending a post on Philip Roth today, but have postponed this in order to write about a visit I made with Mrs TD yesterday to the Japanese garden in the pretty village of St Mawgan. 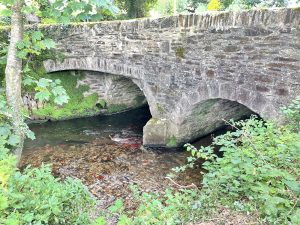 The bridge over the Menalhyl beside the church

It is situated in and around the valley (the Vale of Lanherne) of the river Menalhyl. Wikipedia suggests that this name is from the Cornish ‘melyn’, mill, and ‘heyl’, estuary, but I’m not convinced by this.

The full name of the village is St Mawgan-in-Pydar. ‘Pydar’ is one of the ten hundreds of Cornwall, but I’ve been unable to find out what the name might signify in Cornish.

St Mawgan is one of those obscure early medieval saints who are celebrated in all kinds of place names, church dedications and so on throughout Cornwall. All I’ve been able to determine online and in my hagiographical books is that he may have been a 5-6C Welsh missionary bishop who established a monastery and church in the area. There’s another village with this name, St Mawgan-in-Meneage, on the Lizard peninsula. ‘Meneage’ is from the Cornish for ‘monastic land’, with connotations of ‘place of rest or sanctuary’. 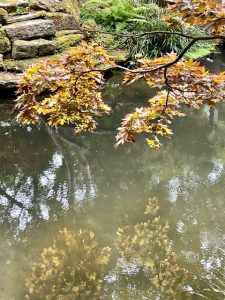 We last visited the Japanese gardens in St Mawgan soon after they opened over 20 years ago. Not surprisingly it looks very different today. It’s a serene and peaceful place, shaded by hundreds of lichen-coated trees, many of them that Japanese stalwart, the maple or acer. Most are very old, and have become contorted in shape as a result presumably of what was once soft, swampy soil, causing their trunks to veer at sharp angles. As a result they now resemble huge equivalents of the miniature bonsai trees on sale in the garden shop. 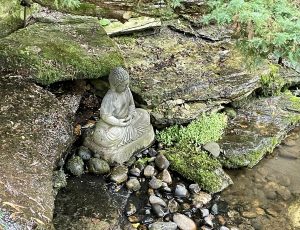 The gardens inspire a meditative mood, reflected in the sculptures posing in nooks beside pools and groves

There are waterfalls and natural ‘sculptures’ formed by tree stumps and moss-covered rocks. There are also a couple of pretty ponds, one patrolled by beautifully marked koi carp, and shaded by acers that seem to be just starting to turn colour as autumn approaches. 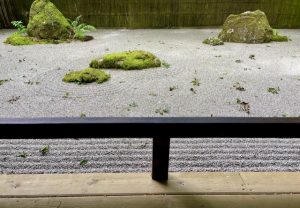 The zen garden; leaves had blown over it in the wind

Statues of the Buddha and various meditative monks are sited strategically in every zone, along with pagodas, dragons, lions and other traditional Japanese designs.

There’s an austere Zen garden, with the characteristic raked pattern in the gravel, and several moss-covered boulders to soothe the observer’s spirit.

The attractive parish church that stands in the village centre nearby is dedicated to Sts Mauganus (the Latin equivalent of Mawgan) and Nicholas. The current building dates at least partly from 13-15C. There are some fine 15C carved pew-bench ends. The church guide says there’s a holy well beside the lychgate. If so, it’s now just a sort of overgrown hole. 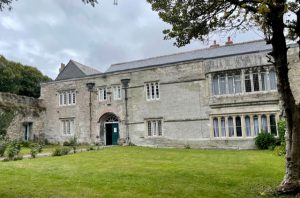 Next to the church is Lanherne House, once a Carmelite convent (Historic England gives detailed architectural description and history HERE). The structure is mostly 16C, with 17C and later additions and restoration. It’s said to have been resurfaced at the back by Sir Christopher Wren.

This was one of the grand houses of the Arundell family, lords of the manor here since the early 13C. By 1501 John Arundell had become the wealthiest man in Cornwall. 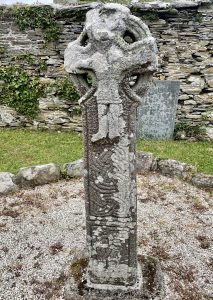 This ornate cross stands in front of the convent

The family’s fortunes dwindled after the Reformation and establishment by Henry VIII of the church of England; as a staunch Catholic family they were persecuted as ‘recusants’ – some were imprisoned, fined or had lands confiscated. Most of the family land had been sold by the late 1700s, and the line had died out, continuing by marriage in a ‘cadet’ branch in Wiltshire.

(There’s an interesting account by the local scholar Bernard Deacon: ‘The fall of the Arundells of Lanherne’, at his blog Cornish Studies Resources, 2020, link HERE.)

Lanherne House was given in 1794 to a group of Carmelite emigrée nuns from Belgium. Their order left the site around 2001, and the convent became home to the Franciscan sisters of the Immaculate. As far as I can tell from online sources, this is a small ‘first order’ of nuns founded in the late 20C in Italy.

It’s an attractive building, but we weren’t able to go inside, where there are said to be some interesting features. There’s a modern shrine to the BVM in the courtyard in front of the 19C chapel section, and a collection of what look like former farm buildings behind. There’s a fine view into the valley from its elevated position above the river.

Cornwall-Newquay airport is nearby (Newquay town is four miles away). At the mouth of the Menalhyl river is the fine sandy beach and resort of Mawgan Porth. There were 69 shipwrecks in just a six-mile stretch of coast here 1754-1920. One of the most famous is that of the schooner Hodbarrow Miner in 1908. Three of its crew are buried in the churchyard, where there’s also a wooden memorial to others who lost their lives at sea nearby. A photograph of the wreck hangs on one of the church’s walls near the main entrance.

I’ve posted previously about the dangerous, unpleasant underground conditions in which Cornish miners worked until recently; the same could be said for the people who sailed in the treacherous seas around the peninsula’s rocky coast.