Why this unwieldy title? Ford’s introduction ‘Why not a novella?’ explains why he’s preferred the generic term ‘long story’. After discussing some of the genre conventions and theories in fiction (novel, novella, short story), he gives a historical account of the novella form, tracing it back to Boccaccio through to Goethe and later (Henry James, for example). He points out that novellas were particularly popular in Germany through the 19C, and they generated a great deal of earnest theoretical-generic analysis, much of it providing inconclusive or contradictory definitions of what exactly a novella was. 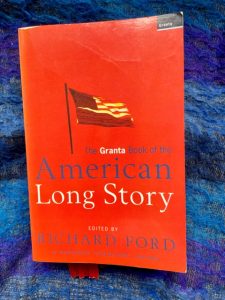 Ford canvassed fellow American writers to assess what they, as ‘practitioners’, believed a novella to be. No consensus emerged, but there was a great deal of disagreement when Ford compiled this anthology in 1998.

He finally opted to go with ‘long story’ as a ‘possibly less historically-infuriating and ultimately freeing expression’. His purpose was to ‘address readers and writers who relish long stories…free[ing] its audience to write and relish as suits its wishes, undistracted by offstage wranglings over nomenclature.’

Despite his best efforts to come up with a ‘spanking’ definition himself, he could ascertain nothing to ‘discern anything other than length to distinguish these stories as a uniform genre, or to distinguish them consistently from their seemingly better-defined narrative cousins’.

So that’s sorted that out.

The stories Ford selected for this anthology were all written between the end of WWII and the time when he was compiling it. They vary in length – which, as he’d argued, ‘is just another arbitrarily chosen attribute’. Some were called ‘novellas’ when first published, but he’s decided he just doesn’t know what that term means – and neither is there any agreement generally – so why not consign ‘a worn out literary term into retirement.’

His main criterion for selection was subjective: he chose stories that he considered ‘excellent’, but concedes that some readers will disagree with his choices (I’m one of those: more in a later post.)

American writers since the end of the war haven’t tended to write long stories compared with their output of novels and short stories; perhaps this is because of the exigencies of ‘magazine space and publishing economies’. Maybe that’s the reason ‘novellas’ proliferated: it was expedient for the outlets in which they were published, and the contemporary taste and reading habits of their intended audience.

I’ll finish with a note about the first story in the collection (pp. 1–70); I hope to post about some of the others later on:

This is a strange, hallucinatory story set in the fictional Morgana, Mississippi, told initially from the point of view of Loch Morrison, a small boy of about ten, in bed with a fever. He spies, ‘Rear Window’ style, through his bedroom window, and later from a tree outside it, on the goings-on in the house next door.

It’s now unoccupied. Loch observes a young couple sneaking into the house and disappear upstairs – it’s obviously a place where they can have sex, but of course the boy is too young to realise this.

His big sister Cassie’s voice then takes over. Some years earlier she used to have piano lessons in the house; her teacher was an old woman called Miss Eckhart, the impoverished lodger there. She was very stern with her pupils, except for a flighty girl called Virgie – the same girl Loch saw sneaking into the house with her sailor boyfriend. Only Virgie could get away with challenging the teacher, because she had a genuine gift for music, and wasn’t frightened by her strictness. On the contrary, she bullied the old lady.

The story ends with a bizarre sequence of events (I don’t think it’s a spoiler to summarise them here). An old lady enters the former teacher’s room and starts setting fire to the dilapidated piano, still standing there, and to the rest of the room. It’s the room where Miss Eckhart used to host an annual June recital. Two neighbours spot the smoke, alert the house’s watchman, and confront the ‘fire bug’. The half-dressed lovers walk flagrantly out of the house while this altercation is going on, Virgie with a characteristic swagger.

In a poetic, elegiac coda, Loch reflects on these developments, and so does his sister. It’s a story full of steamy, sultry atmosphere, a sort of muted southern Gothic (Welty lived much of her life in Jackson, Mississippi). Miss Eckhart is sympathetically portrayed: a sad German emigrée, she longs to be accepted in the local community and to find love, but is always treated as a person with an alien, outsider’s culture. Her passion for music isn’t appreciated (or even wanted) – even the talented pianist Virgie is unimpressed by her, and treats her contemptuously and cruelly.

People like the spirited, rebellious Virgie and lonely, despised Miss Eckhart have no connection – with each other, or anyone else. They’re ‘deliberately terrible’:

…roaming on the face of the earth. And there were others of them – human beings, roaming, like lost beasts.