Jonathan Calvert is the editor of The Sunday Times’s Insight investigative journalism team; George Arbuthnot is its deputy editor. Failures of State is their account of the disastrously inept handling by the British government – and PM Johnson in particular – of the Covid pandemic. 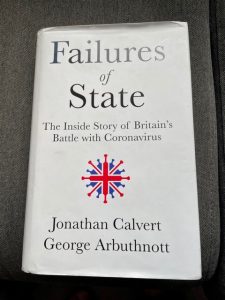 Their tone is set in the prologue, where they juxtapose Johnson’s portentous ‘You must stay at home’ lockdown speech on 23 March last year with his characteristically preposterous, boastful image of ‘Clark Kent, champion of free market libertarianism’ in a speech he made a month earlier. They go on in the rest of the book to trace the chronology of the British government’s and PM’s failure to act swiftly or decisively enough to stop Britain becoming one of the world’s worst responders to the crisis, with some of the highest rates of infection and death in the developed world as a consequence.

The first chapter explores the obscure origins of the virus in China. Was it, as some believe, the result of an accidental leak from a research lab in Wuhan? This seems more feasible than the ‘bat cave’ source more usually identified – this is hundreds of miles away from Wuhan, where the virus first appeared. Whatever the case, the Chinese seem guilty of attempting a cover-up that resulted in catastrophic delays in the rest of the world’s response to the spread of the virus.

‘Sleepwalking to disaster’ is the title of the second chapter (Jan. – March 2020): despite ominous warning signs from Dec. 2019 and earlier, government failed to take the danger seriously. Johnson missed the first five meetings of Cobra (the national crisis committee), more interested in his own turbulent private life and his obsession with Brexit. He made light (like his chum the then-president of the USA) of this minor ‘flu’ virus. He allowed events like football matches and the Cheltenham horse race festival to take place – these became super-spreader events. Warnings from Sage (the expert scientific advisory group for emergencies) went largely unheeded. They still are today.

Subsequent chapters describe with chilling detail why the first lockdown in March was fatally too late, and this reluctance to take prompt, decisive action was to be repeated several times over the following months. Johnson and his chancellor, Sunak, prioritised the economy over public health. ‘Herd immunity’ was their heartless tactic (despite denials that this was the case). They dithered and delayed, allowing tens of thousands to suffer and die needlessly. Their mantra of ‘stay at home, protect the NHS’ proved just more empty rhetoric – our health service was rapidly overwhelmed.

The then health secretary Hancock was as fond as his leader of making empty, sweeping boastful staments, from creating a ‘world-beating’ test-and-trace system (that turned out to be useless) to claiming he’d put a protective ‘ring of steel’ round older people in care homes; the reverse turned out to be the case. Some 25,000 patients were controversially discharged from hospitals into care homes during the pandemic’s height, many of them ‘without first being tested.’ This had the effect of ‘dispersing the virus into the very place where Britain’s most vulnerable were supposed to have been shielded.’

It is one of the most scandalous facts of the lockdown weeks that hundreds of patients who had tested positive for the virus were also deliberately sent into care homes.

By 17 April 2020 there had been almost 10,000 excess deaths in care homes since the beginning of March. This was, the authors say, ‘another big but unsustainable claim.’ Johnson even told a parliamentary committee in May that ‘every discharge from the NHS into care homes was made by clinicians, and in no case was that done when people were suspected of being coronavirus victims.’ He was either badly informed, say the authors – or using language to obscure the truth: many of those discharged would have been asymptomatic, so even clinicians wouldn’t have suspected them of being infected without testing them. The reality was that there simply wasn’t the capacity to test so many.

There I’d better stop: it becomes to upsetting and infuriating to consider the evidence provided so meticulously in this book of this country’s leaders’ hopeless, dangerous and reckless response. What’s worse, Johnson and co. constantly claimed to be ‘following the science’, when all the data indicates they were not. Their dismal list of bad decisions precipitated the successive waves of infection and economic depression that afflicted this country more disastrously than in any other western country.

It’s dispiriting to read this relentless catalogue of mistakes made by the very leaders who should have been protecting their people. Their blunders and subsequent blustering denials that they’d done anything amiss resulted in millions more Covid cases in Britain than would have been experienced if they really had followed the advice of their scientific and medical advisers. Their decision to protect the economy and jobs instead produced the opposite outcome: Britain’s GDP suffered proportionately far more than most. As the bereaved families for justice group wearily stated, ‘they ignored us and repeated the same mistakes.’

They still are: we are seeing a million new cases a month in this country this autumn, and yet we’re being told to abandon all the protective measures we’d previously been adopting, as we’ve ‘come out the other side’ of the pandemic, as former health secretary Hancock was heard telling constituents the other day. Let’s hope that the public enquiry into these matters, which Johnson will have to face – he can’t keep delaying it indefinitely – will expose those responsible for ‘one of the most scandalous failures of political leadership in British history.’

12 thoughts on “Failures of State”