Natalia Ginzburg, Family Lexicon (first published in Italian, 1963; this translation by Jenny McPhee, Daunt Books 2018, previously in America by NYRB). Another book by an author I’d read so many good things about I thought it was time I gave her a try. This one wasn’t for me.

It’s autobiography that the author says should be read as a novel. I didn’t think it worked as either. Its fragmentary, repetitive structure and huge number of ephemeral, lightly-sketched characters prevented me from sustaining any interest.

The narrator’s scientist father is a monster: a bigot and a tyrannical bully who constantly shouts abuse and insults at his cowed family members, and anyone else unfortunate enough to cross his path. Ok, so lots of novels feature monstrous parents. But this despotic man doesn’t lead to much in the way of insight or redemption; he just is. I suppose that’s Ginzburg’s point: as a child she had to learn to survive his tantrums, and this made her perhaps a stronger person. But this didn’t come across in the stilted narrative.

Her mother is fickle, complaining (not surprisingly, given her husband’s nature) and frankly not very bright. Her four siblings bicker and fight, but the jerky structure means there’s little coherence or continuity. It’s like watching a magic lantern show – shapes just flit across the scene leaving little impression.

Even the main, important subject – the persecution of Jews in Italy from the 30s through to WWII – is curiously distanced and muted.

Plenty of readers had a much more positive response to this book; all I can do is to present my own, for what it’s worth. We can’t all admire the same stuff. 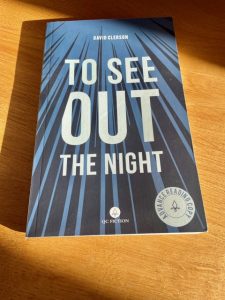 David Clerson, To See Out the Night (QC Fiction, Canada, 2021; translated from the French by Katia Grubisic; ARC courtesy of the publisher). These twelve very short stories all contain surreal or fantastic elements. This is not a genre I usually like, but this collection is accessible and nimbly told and translated.

The central theme is to question what the ‘real world’ is, and how do we recognise it if and when we experience it, how do we perceive or distinguish reality from…the unreal, imagined or fantastic? So characters are transformed, or believe they are, into other entities – an ape, in the opening story, or an insect in another.

Dreams are another recurring feature. Most of the events narrated have a dream-like quality. Sometimes the characters appear to know they’re dreaming – or they think they do. Subterranean or forest worlds are as accessible and remarkable as the mundane. Being human is as potentially alien and solitary as the life and form of a mushroom.

Several stories involve characters who write or tell stories that often weave into the perceived reality of their own and other people’s lives. The boundaries between these worlds of fiction are as blurred as those in dreams.

The dustjacket blurb describes the stories as ‘visceral’ and ‘surprising’ – a reasonable claim.

There’s a fuller, perhaps more enthusiastic review of To See Out the Night at Tony’s Reading List (link HERE).