I’ve been busy with work again lately, so the next few posts, if I get time to post what I plan to, will be quick recaps of some recent reading.

This is another of those novels that most reviewers have raved about; I struggled with it, and nearly gave up after thirty or so pages. I simply didn’t relish reading about ‘Sanger’s circus’, the chaotic-bohemian ménage in the Austrian Tyrol of English avant-garde composer Albert Sanger. This neglected, wayward genius and his tribe of shabby, barefooted feral children (by three different mothers; certain British prime ministers come to mind) are supposed I think to be charmingly alternative, spontaneous and precocious – a sort of antidote to the saccharine von Trapps. Instead I thought their spiteful anti-Semitism and careless selfishness repellent.

One of the male characters, a Jewish suitor of the oldest Sanger girl, is portrayed in unpleasantly negative stereotypical ways, and is treated by many of the others, including his lover, with undisguised contempt. 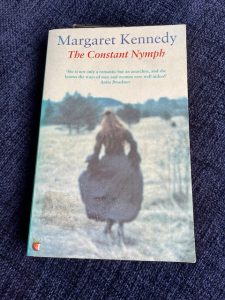 It wasn’t me who made the image blurred: it’s that way on the cover. It’s by the Swedish photographer Irmelie Krekin.

A budding composer called Lewis, one of the central characters, is a friend and disciple of Sanger, and another less than charming figure. He’s anti-social to the point of misanthropy, another supposedly eccentric genius – in fact he’s just another selfish boor.

When his new wife tries to tame him, make him presentable in chic London society as a means of promoting his stalled career, he rewards her by becoming romantically attached to one of the younger Sanger girls, Tessa (the nymph of the title) – just 14 when the novel opens. She’s been hopelessly in love with him since she was a little girl. She’s an unlikely mixture of shrewd precocity and naiveté, and Kennedy just about succeeds in making her an attractive, increasingly confident and rounded character.

Tessa’s is easily the most successfully drawn character in the novel. She’s described as plain and skinny, but also vivacious, witty and charmingly ingenuous, the only one who can handle the irritable, moody Lewis. But this Lolita-like relationship is worryingly one-sided: she’s far too young for such a committed affair with an older man whose interest in her isn’t surely as pure or innocent as hers in him. Kennedy doesn’t shy away from the sexual element, either, and this too is troubling. All the older Sanger children show unabashed awareness of their sexuality. It’s probably this frankness that contributed to the novel’s being a huge best-seller in its day.

I enjoyed the scenes by the Thames at Chiswick; I’d been walking there with friends the week before reading them. It’s a lovely part of outer London.

The ending is predictable and disappointing, and shows perhaps a loss of nerve by the author in her daring plot and unconventional protagonists.

No, I’m afraid this novel left me feeling rather irritated with most of the characters, particularly the odious Lewis.

19 thoughts on “A Constant Nymph”