Hilary Mantel, An Experiment in Love, Picador 1996; first published 1995. This is another novel I heard good things about recently, in this case on the BBC Radio 4 book podcast, A Good Read (link HERE: the item comes after about nine minutes). I was attracted by the main setting: a hall of residence for women at the LSE (part of the University of London) in the early 70s – the very time when friends of mine were there. 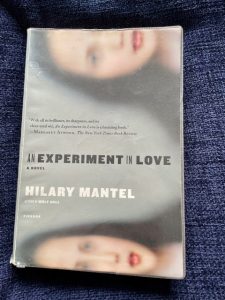 This is the edition I borrowed from the library; it was published in America.

I found these university/London scenes compelling and realistic – I felt I was reliving my own youth. The class differences are particularly well brought out: the privileged ‘Sophies’ and their boyfriends, the ‘Rogers’, are well off, privately educated, with a veneer of sophistication and casual generosity blended with condescension. Then there are the poor, working-class (northern) girls like Carmel, whose unfulfilled and angry mother is a cleaner, and who struggles to make her meagre grant stretch to keep her alive. At least students got a grant in those days (I was one of these lucky ones); now they’re left with huge debts when they graduate.

The women at the heart of the narrative are also well done: Carmel is a self-confessed mouse, timid and nerdy, but also sensitive and perceptive. Oddly enough she has a (doomed) sex life with a dull man who fails to see her true self and dumps her when she reveals her inner truth.

In fact it’s the sexual element of these young women’s lives that’s a key feature in the novel. In 1970 the liberation of women was beginning to take shape – but within patriarchal limits. Abortion was available, after a fashion, but the women who went through the procedure were viewed with a mix of pity, scorn and awe by the likes of Carmel. She believes, perversely, that it’s the nice girls who are foolish enough to get pregnant. I remember well this weirdly perverse and ambiguous attitude at the time.

Despite the early stirrings of feminism and the continuing quest for equality for women, girls from Carmel’s background could only hope to gain a good education as a way out of their otherwise inevitable fate: the drudgery of unequal marriage, motherhood and housework. Even this hope turns out not to be all it seems. She starts out well, winning a scholarship to a smart but repressive Catholic convent school, and then a place at London University. The price of being a swot is high: social life is limited by her poverty already, and she’s no competition for the glamour-pusses like the Sophies.

There was something amiss with this novel too, though. There was something a little too contrived about the plot, and the ending (which I didn’t see coming) was a dramatic shock. As the podcast participants point out, however, there are clues strung through the narrative, and it’s probably a good idea to re-read, to see how skilfully Mantel builds the tension and the inevitable outcome that shouldn’t have been such a surprise to me after all.

The depiction of anorexia – I suppose these were days when it wasn’t much understood or acknowledged – is interesting. The descriptions of the institutional meals are stomach-turning – but I realised eventually that of course they are seen from Carmel’s food-averse point of view. My own recollection of hall of residence food was that it wasn’t great, but not as disgusting as Carmel makes out.

Karina, who has a love-hate relationship with Carmel from their early childhood, is another complex character. Her family were east European immigrants, seemingly having escaped persecution decades earlier, although this is never made explicit. Carmel dislikes her mostly because her mother, taking pity on Karina’s family’s poverty (they’re even poorer than hers) and history, insists that Carmel walk to primary school with her every morning. This reaction quietly points to the kind of initially unperceived, insidious bigotry that caused Karina’s family to be persecuted in the first place. It also explains why Karina becomes so bitter and angry.

At the novel’s end, though I was less irritated than I was with the Nymph (see my previous post), I wasn’t enthused. I’m not sure about the novel’s uninspiring title, either. There was little I could see in the way of experimentation, in love or anything else.

18 thoughts on “Hilary Mantel, An Experiment in Love”