This is the harrowing story of the fall of Vietnam to the communist forces, and what followed. The ignominious evacuation of Saigon – a corrupt regime propped up by equally dodgy American military and covert forces fled in scenes realised dramatically here – was mirrored this summer in Kabul. Only those influential or rich enough to bribe their way onto the last planes to leave the airport made it – and not all of them survived. 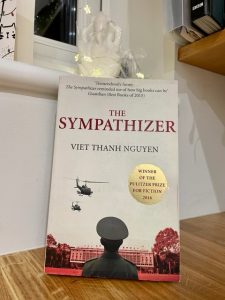 The narrative is in the form of a confession to his captors by a self-confessed ‘mole’, a communist spy embedded at the highest level of the Vietnamese military as it struggled to delay the inevitable collapse of the former colonial government. At the onset he emphasises his dual or split nature – an image that looms very significantly at the novel’s end.

He can sympathize with both sides of the conflict: his mother was Vietnamese, his father a French priest. He’s therefore seen with suspicion by the natives of the country he was born and brought up in, but equally by the Americans (he was educated in an American university and speaks perfect English) and Europeans.

The narrator’s final epiphany is breathtaking. The Sympathizer was a worthy winner of the Pulitzer in 2016. It was perhaps a little too long for my taste, and some of the scenes of violence, torture and rape are unpleasant, and I’m not sure they needed to be quite so graphically detailed. The novel packs a serious punch – but I can’t really say that ultimately I enjoyed it. Admired, perhaps.

On reflection I think it was partly the narrative voice that put me off, as well as the content, and excessive length (just short of 500 pp). There’s a whiff of the hard-bitten noir style of the Chandler school. This is in keeping with the covert nature of the mole’s life, his task to pose as something he’s not, which has the effect of creating for him an existential dilemma. Like a tough, embittered Chandler hero, he inhabits a nasty world in which nobody can be trusted or taken at face value, and he’s haunted by the victims of his duplicity.

The satiric section of the novel depicting the narrator’s role in the making of Coppola’s epic Vietnam film ‘Apocalypse Now’ was one of the best parts of the novel. He tries (and fails) to persuade the ‘auteur’ director to portray the Vietnamese characters as something more than ciphers – and pays a heavy price for his efforts.

I’ve started reading a Hardy novel – The Trumpet Major – in an attempt to break this run of unsuccessful reading experiences.