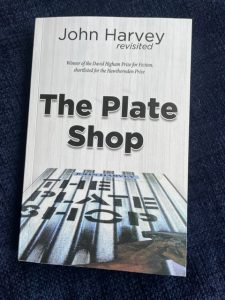 Holland House is an independent London publisher founded in 2012. They recently released all five of John Harvey’s novels in a ‘revisited’ set. Here at the Days there are several posts about The Subject of a Portrait, his excellent 2014 novel about the tangled lives of Ruskin, Effie Gray and the artist Millais (links HERE). In one post I introduced him like this:

[JH]) is a distinguished academic: he’s University Reader in Literature and Visual Culture at Cambridge, and a Life Fellow at my old college, Emmanuel. This interest in the ways in which visual art and fiction intertwine is reflected in this novel, and in his two books on the socio-cultural and literary significance of the colour black.  Men In Black (1995) explores the meaning of clothing and colour, and in particular the way that Victorian men’s clothing went dark, reflecting the constraint and self-abnegation of that period. He explores how Dickens and Ruskin (subject of the novel under discussion here) assessed its ‘paradoxical aspects of repression and self-assertion’. The Story of Black (2013) develops this theme in broader symbolic terms, including aesthetically and sexually. (Links to these posts at the end.)

In 2019 wrote about Pax, his most recent novel, which also deals with the worlds of art and eros. It tells of the visit to London in 1629 of Rubens, and of another artist in 2003.

I was delighted to be sent by John and the publishers a set of the reissued novels that I haven’t yet read. The Plate Shop was his first novel, inspired by his experience as a student doing a vacation job. The ‘shop’ is part of a factory making heavy machinery. The novel deals with what the author calls in his introduction to this edition ‘the hard relationship between Money and Work in the world.’

This was a time of economic and technological change, and the plate shop is precariously placed. It represents outmoded methods, old technology, is a relic of the industrial revolution. New ways of manufacturing and marketing commodities and new foreign markets are taking over, and Britain’s traditional economic dominance in this world is precarious. Dinosaurs like this shop needed to modify (evolve?) or die. The catastrophic miners’ strike of 1984-85, just a few years after this novel is set, marked a low point in this corporate decline, and was the beginning of the end of Britain’s manufacturing and industrial status.

There’s a large cast of characters, brutalised and exploited by the work ethic of the time; their response is to behave tribally, to operate in packs. One of the most sympathetic is different, an outsider and foreigner, ‘not one of us’, a Czech plater who’s sacked in a case of racist bigotry only too casually apparent at that time. I recognise these characters and this setting from my own time as a student in the early seventies in a vacation job at a factory outside Bristol that made the British parts of the supersonic aircraft, Concorde. Like John, as an academic I was consigned to the technical drawing office – a smoke-filled den (chain-smokers, all of them) deep inside a huge hangar. Mine was a tedious clerical job: no heavy machines, drilling or plating for me.

Dominating the plate shop is the larger-than-life figure of Clyde, the bullish but fading shop foreman, who symbolises in human form the doomed nature of this field of manufacture. He used to rule the shop, using his mechanical genius to fix problems and impose his will on his awe-struck workforce. But just as the pictures got smaller, so the machines became more complex, and he’s struggling to maintain his dwindling authority. He’s out of key with his time – and so is his shop.

The hated Time Study men now threaten his role, with their stopwatches and timesheets that determine the schedule and control for each worker. Clyde becomes increasingly bemused and frightened as he sees himself becoming redundant, superfluous.

The gripping prose style is Dickensian, synaesthetic: all harsh, clanking, metallic sounds and vivid light and dark in many of the scenes set in and around the workshop (which is most of the novel). These descriptions remind me of Hard Times, which could be seen as a sort of precursor to The Plate Shop. Here’s an example from the very first page, showing the artist-author’s realisation of the concrete in a multi-sensory, poetic style:

From dazzling points in the walls, pencils of light came in. Colours came out in the machines, which stood clear in all their different shapes: an upshooting wiry machine was all run and whip and gleam of tough silver threads; a square red casing stood rigid at attention, severe, burning in upright fire. Beneath a soaring tree of girders sprawled a long low humped and curved machine – deep-green, enormous – like a dangerous armour-plated creature asleep. In the girders above, a fat amber cable curled among the leads like a snake asleep among vines.

See what I mean about the Dickensian tone? Those images, that hint of dark satanic mills.

The Plate Shop also reminded me of those gritty black-and-white films of the sixties and early seventies, often in heavy industry settings, like ‘Saturday Night and Sunday Morning’. These also portrayed that end-of-an-era period of decline and depression, the technological and social revolution that turned the smoky, complacent world of (soon to be) post-colonial Britain into a vacuous, superannuated nation of service industries, manufacturing all gone, and a deep sense of grievance, loss and entropy in its working population.

This novel is a brilliant, deeply felt elegy to that grimy, world of decaying heavy industry and capitalism.

It’s good to see that Holland House have included some of the original illustrations John Harvey produced for the first edition, but which had not previously been published. These reveal the author’s academic and aesthetic speciality: Victorian Novelists and their Illustrators (1970: his first non-fiction book).

My posts on John Harvey’s books about the colour black HERE; on Clothes HERE.