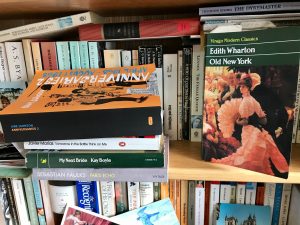 This third in Edith Wharton’s collection of novellas, Old New York, each of which is largely set in successive decades of the mid-century, 40s-70s, deals centrally with the effects of the Civil War (1861-65) on some of its ageing veterans in the upper echelons of New York society.

My father was an artilleryman in WWII. He endured much of the war as a POW. Not surprisingly he was traumatised by his experience, and rarely spoke about it. I was poignantly reminded of him in Wharton’s portrayal of Hayley Delane in this novella – another ‘shut-up fellow’ who ‘wouldn’t talk about the war.’

The Spark depicts him through the eyes of the young Harvard graduate who narrates three of the four novellas. He’s attracted to Delane by his standing morally aloof from the shallow, ethically bankrupt society of ‘well-to-do and indolent New Yorkers’ in ‘the archaic nineties’, yet being more than content to engage with them in their senseless social activities.

Our narrator is curious to discover what is the ‘hidden spark’ that motivates mild, ‘soft-hearted’ Delane to behave with such undemonstrative moral probity, while turning a blind eye to his wife’s heartless treatment of him, and seeming content to conform to the shallow pleasures of his social world. Furthermore, he seems once to have been a keen reader of poetry, and yet now shows no interest in literary matters. There’s a puzzling dichotomy in the man that he’s determined to get to the bottom of.

Delane’s wife Leila is a trivial, frivolous, flirtatious woman, fifteen years younger than her husband, who is besotted with her. The narrator is intrigued to see how ‘it was she who ruled and he who bent the neck’. She treats him with undisguised contempt in public, while making no attempt to conceal her serial flirtations – or perhaps affairs.

A crisis comes when Delane thrashes Leila’s most recent conquest for mistreating his polo pony. Delane is forced by his hypocritical friends to apologise to his rival; they assume it was a jealous outburst. The narrator is more inclined to believe Delane’s quietly insistent explanation: ‘”It’s the cruelty. I hate the cruelty”’.

Furthermore, having heard the wronged husband talk eloquently and knowledgeably about literature, he can’t believe ‘it was his marriage which had checked Delane’s interest in books.’ His ‘limited stock’ of quotations and allusions indicates his literary interests ceased long before he’d met Leila.

After showing an early interest in reading, especially of poetry, ‘when his mind had been receptive’, it had:

snapped shut on what it possessed, like a replete crustacean never reached by another high tide.’

When he discovers that Delane ‘ran away from school to volunteer’ to fight in the Civil War (hence this story’s billing as ‘the sixties’) and was wounded, he begins to understand what now sparks Delane’s soul into being. He’d ‘stopped living’, in a sense, aged about nineteen, at a date roughly coinciding with the end of the war, when he’d returned ‘to the common-place existence from which he had never since deviated’ – the vacuous, unthinking life he clearly now enjoyed, like the ‘merest fribble’: polo, cards, hunting and social gatherings in which his unfaithful wife could shine:

Those four years had apparently filled to the brim every crevice of his being.

The war had made him different – in a way not seen by most other veterans in his circle who bragged about their war experiences. Although indistinguishable in most ways from the rest of his narrow-minded social set, with their empty libraries and obsession with sensual pleasures, ‘it was only morally that he had gone on growing.’

Hence his calm defence of his unfaithful wife, of the cruelly abused horse, and of unfashionable moral principles and causes, ‘careless of public opinion’ in ‘important matters’ – even at the expense of his own reputation: ‘To Delane, only the movement itself counted’; he wasn’t interested in the social standing of those who supported it, or what society thought of him.

There are parallels here with the depiction in other Wharton fictional works of the roles and shortcomings of parents and children. The narrator of The Spark looks up to Delane with the devotion of a son to his father. This New York banker ‘of excessive weight’, mounted ‘heavily yet mightily’ on his polo pony in a ‘gaudy polo-shirt’, contrasted unbecomingly with the young rival for his wife’s affection, as Leila heartlessly points out. Yet he’s intrigued by some quality in this unusual man, and he senses depths beneath ‘his lazy, torpid’ ways, that would justify his love for the man. He ‘whimsically’ perceives him as an image of the 14C condottiero Guidoriccio da Foliagno, ‘the famous mercenary, riding at a slow powerful pace across the fortressed fresco of the Town Hall of Siena’ on ‘his armoured war-horse.’

Given what he discovers about Delane’s wartime experiences, this apparently incongruous image takes on greater significance. Despite his trauma, which atrophied much of his personal development, Delane has matured morally in ways that most of his peers can never match, and which the loving narrator instinctively perceives.

This develops in interesting ways the theme found in other works of fiction by Wharton, in which parents and surrogate parents vie for the devotion of their children, as in A Son at the Front, published in 1923, around the time of the first appearance of these four novellas in magazine form.

There’s another twist at the end, when we finally learn the identity of the person who was the catalyst for this ‘spark’ in Delane: it was the gentle, humane influence of Walt Whitman, who nursed him when he’d been wounded early in the war, at Bull Run. It’s well known that Wharton greatly admired Whitman’s poetry. The final irony of this strange story is that Delane blithely admits to his young friend that he considers his poetry ‘rubbish’.