The blog has been silent for a while: I’ve been very busy working (even though my day job ended last summer). Mrs TD had a big project on, and I was asked to assist. It’s been tiring but stimulating – and left little time for reading, let alone posting here. I finished this novel a few weeks ago, and this is the first pause in which I’ve been able to try to collect some thoughts about it.

Last year I posted on a selection of Maupassant short stories: Mademoiselle Fifi and other stories. I ended that post with a quotation from a Henry James essay on Maupassant, who  paints ‘a picture of unmitigated suffering.’ It was about Une vie that he was saying that. 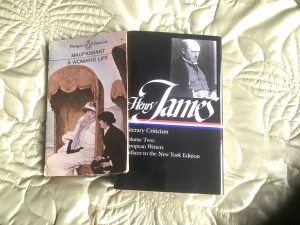 He rightly points out that this first novel by Maupassant, started when he was just 27, but not finished until several years later, has little in the way of plot. As EM Forster famously explained, ‘the king died and then the queen died’ is a story; ‘the king died and then the queen died of a broken heart’ is a plot. Jeanne leaves her strict Rouen convent (in 1819) at the age of 19 to go and live in her parent’s grand but dingy country estate on the Normandy coast. Her father is a fairly wealthy man, owning a number of farms, but he’s profligate and generous with money, so the family live in quietly shabby gentility. Then things happen to her, in chronological order. This happens, then that. It’s unanalysed.

Jeanne’s joyful optimism and romantic schoolgirl dreams seem to be fulfilled when she falls in love with a dashing and handsome neighbour, the Vicomte. After a brief courtship they marry, but all goes downhill for her from then on.

She’s appalled by the physical side of married life. Julien drops all the attentive sensitivity he showed towards the naïve, virginal girl he courted, and shows his real, debauched nature. He’s brutal with her sexually, turns out to be less rich than he seemed, stops making an effort to charm, and shows he is an ugly, miserly character – he rapidly takes over all his callow wife’s fortune and leaves her powerless and without a role in the household, while refusing to stop excessive economising. Jeanne makes the miserable boredom of Madame Bovary, by Maupassant’s mentor Flaubert, look like fulfilment.

She’s grateful to find Julien becomes less demanding of her in bed, until the real reason for his indifference is revealed: he’s a libertine, and serially unfaithful to her. His affair with a neighbouring landowner’s wife ends badly for the adulterers, in a horrific scene lifted almost unchanged from Maupassant’s story in the Fifi collection, ‘The Shepherd’s Leap’ (except the role of the insanely zealous priest is shifted to the cuckolded husband).

Can a heart be broken more than once? Jeanne’s is. The illegitimate child on whom she lavishes all her thwarted love completes the job his father started, and drains his mother’s dwindling fortune with his never-ending begging letters for money – he’d left home to live with a woman portrayed as little more than a prostitute. There’s that duality of Maupassant’s view of women: harlot or nun.

James describes this novel with muted enthusiasm as ‘an interesting experiment’. Maupassant opens a window (he wrote in the essay I mentioned at the start) ‘to everything mean, narrow and sordid.’ Jeanne starts her adult life full of hope and dreams of romantic love, and receives ‘the outrages of fate with a passive fortitude.’ As her life gets bleaker and more dreary, so she tries to carry on, friendless and uncomforted, increasingly dominated by her disillusionment, loneliness and grief. Divorce is impossible; she can only endure.

She’s one of Maupassant’s few women characters who’s not extremely sensual or mendacious. If anything, she’s excessively innocent and passive. Even the ‘melancholy void’ of the flat pastures of Normandy and the grey sea Jeanne loves to look at from the windows of her house offer limited comfort.

There’s perhaps too much of that monochrome flatness in the novel as a whole. James suggested Maupassant eliminated too much from it: Jeanne is seen in few of the relations of life – just her much-loved parents and a few others. She has what he calls ‘no moral spring’ – I presume by ‘spring’ he means resilience, energetic core or agency – and lacks ‘the edifying attributes of character’. For example, when she looks through her late mother’s treasured pile of old letters, she finds out that she – like Jeanne’s father – had been less than virtuous in her marriage. That revelation of the banal sensuality and casual superficiality of her parents seems to slide off Jeanne, like all the other catastrophes in her life – or else Maupassant chooses not to explore the full impact of this devastating revelations and events on Jeanne. We get little insight into her inner life beyond the sense of her battered self-esteem, and that makes the narrative too detached and cool.

The forces of renunciation and patience sustain her – at times it would have been good to see some kind of spirited reaction. Her purity and bruised resilience are like those of the horse turning the wheel to which it’s tethered and can’t escape. It’s going nowhere, but endlessly, hopelessly toiling to the benefit of everyone but itself.

There are flickers of light and hope in this novel, but I find that James’s use of ‘interesting experiment’ indicates the ultimate lack of enthusiasm that I feel on contemplating this chronicle of ‘unmitigated suffering.’ 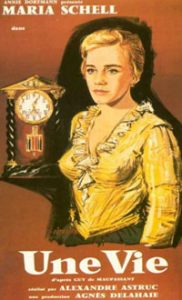 Public domain image of the 1958 film poster. Attribution: By Source, Fair use, https://en.wikipedia.org/w/index.php?curid=48439206

PS: There are apparently two film versions of Une vie: the first starred Maria Schell in the title role. ‘One Life’ or, rather more sensationally, ‘The End of Desire’, as it was called in Anglophone countries, was directed by Alexandre Astruc (1958), the film critic/director best known for influencing Truffaut with his notion of the ‘caméra-stylo’ in nouvelle vague cinema theory. There’s a brief account of it at the NewWaveFilm.com website.

The other was by French director Stéphane Brizé (2016), also known as ‘A Woman’s Life’; it won the international film critics’ prize (FIPRESCI) at the 2016 Venice film festival. There’s a lukewarm review of it at the Guardian here. I’ve not seen either of these films, so will try to track them down.