I think I first became interested in whales after reading Moby-Dick as a student. Many years later I read Philip Hoare’s strange book about them: Leviathan, or the Whale. It was first published I think in 2008. A few years before then I’d seen a pod of southern right whales, rolling and blowing in the sea below us off the coast of South Africa. We’d gone there with friends who had an apartment in Cape Town. We saw more whales just off the beach in another bay nearby. These are among the most magical experiences I’ve had. 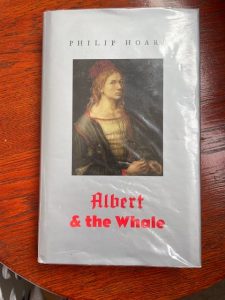 My library copy has a plastic protective cover, hence the nasty shine in this picture

Albert & the Whale revisits the world of cetaceans, largely through the quizzical eyes of the German artist-genius, Albrecht Dürer (1471-1528). As in his earlier whale book, Hoare does this through indirect means: a mix of art history and criticism, memoir, impressionistic detours into the lives and work of the likes of Jung and Freud. Writers are adduced, from Melville himself to Auden and his circle, Thomas Mann and Marianne Moore.

The mix doesn’t always work. At times it’s all just a little too impressionistic and fey. At its best it’s amazing, similar to the more effortless brilliance of Sebald; Hoare is in a lesser league (though he pinches many of Max’s tropes, like the grainy monochrome photos – some of them selfies) – more akin to the less earnest, much funnier Out of Sheer Rage (1998), Geoff Dyer’s eccentric account  of his failure to write a biography of D.H. Lawrence.

On the way there are some hit-and-miss prose poems inspired by the most famous of Dürer’s paintings and woodcuts, including Melancholy, St Jerome (with the weird comet in the background) and St Eustace. The book’s title is a bit misleading, because a whole menagerie of creatures, real and imaginary, feature in the text, such as narwhals and walruses, the armoured rhino with its extra dorsal spike, and octopuses.

The hare was sacred to the Germans, believed to reproduce parthenogenetically, and so was associated with the Virgin Mary. But the hare quivers as she crouches, un-annunciated. Her ears are smooth and soft-resisting; like her vibrating whiskers, they’re visible sentience, sensing a world beyond our own. She’s wild, ready to be picked up and turned over, to lie entranced in your arms….

This is sensitively done, but it’s a shame that the author prolongs such flights too long (there are five more lines of this: it becomes strained). With just a little pruning this book’s meditation on time, mortality and the relationship between humans and the animal (and wider natural) world could have been even better.

There are seven pages of beautiful colour plates at the end. Together with the many black-and-white images throughout the text, these more than compensate for the purple prose. I learnt a lot, too, about the life and work of Dürer, his influences and those he influenced. I was less interested in the obsessively detailed information about how much Hoare paid for his drinks in cafés, or the price of admission tickets to the many museums he visited. 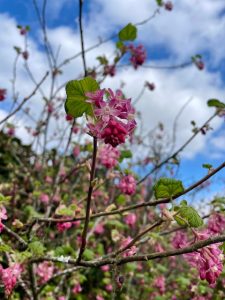 Spring is beginning to show its colours here in Cornwall. Today’s walk took me past a house at the end of my road where these lovely flowers are blooming; I think they’re flowering currant. Magnolias and daffodils are coming to their peak.