Granddaughter (E, aged 10) has returned home after her week’s holiday alone with us here in Cornwall. On her last full day we sat in the garden, enjoying a beautiful sunny day. A few cotton-wool clouds drifted sleepily across the bright blue sky, and we amused ourselves deciding what we could see in their shapes.

Where I saw a donkey, she saw a bunny. Me: a sad horse; her: a squeaky mouse. Well, she is ten, and loves unicorns and fluffy things.

I got to thinking of Polonius and his devious humouring of Hamlet in a similar situation, agreeing with his prince with feigned servility that the cloud they saw was indeed backed very like a whale, if not a weasel. I remembered a while back coming across a word for this phenomenon – seeing faces and other real-world objects in inanimate, random patterns like lichen-covered walls, carpets…or clouds. I flicked through some notebooks and found it:

This is the OED definition (psychology):

The perception of recognizable patterns or images, in random or vague arrangements of shapes, lines, colours, etc.

It’s from the German via Greek ‘para’ – alongside, instead of (i.e. wrong); ‘eidolon’ – image, form, shape, likeness (from which we take our word ‘idol’).

According to Wikipedia’s account of the term, our brains are wired to identify human faces in particular in all kinds of unlikely situations: two fried eggs and a sausage in a cooked breakfast, or smiley faces in emojis consisting of a colon and a bracket. We even attribute emotions to these images – hence the smiley face; it seems it’s probably something to do with our cognitive processing of human emotion in others – or possibly for distinguishing friendly from potentially hostile approaching shapes at the subconscious or pre-conscious level.

Hence we see a ‘man in the moon’ formed of craters in the full moon’s sphere, or old men’s faces in rock formations. Many astronomical groups are named as a consequence of their resemblance to terrestrial objects like horses’ heads, ploughs or great bears. I’ve seen Don Quixote’s gaunt features in the abstract shapes on the tiles in my bathroom.

Stories abound of religious imagery like faces of the Virgin Mary or Jesus in foods or vegetables; Mother Teresa’s likeness was said to be found in a cinnamon bun in Nashville in 1996. I seem to recall that such items sell for large sums on eBay. 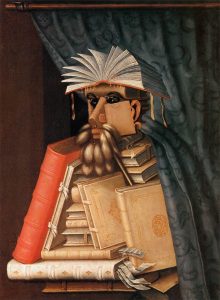 Giuseppe Arcimboldo, ‘The Librarian’, c. 1566, now in Skokloster Castle, Sweden.
(Wikimedia Commons, public domain.) Here the use of books, not fruit or veg, is particularly appropriate

Arcimboldo specialised in paintings which looked like human figures but which were made up, on closer examination, of configurations of vegetables, plants, flowers and other non-human objects.

The Rorshach inkblot test works on similar principles as a means of the analyst’s determining a person’s psychological state – we tend to project on to such shapes images we’re inclined to see.

Even ghost imagery may owe something to the way shadows cast by harmless objects can resemble more sinister entities which are taken by the frightened human as some supernatural emanation (though winding sheets on corpses play a role here, too).

Pareidolia is said to be a sub-set of APOPHENIA: a tendency to see connections between unrelated things –  a condition commonly found, apparently, in conditions like schizophrenia, or to account for gamblers believing they detect patterns in random sequences. The ‘phrenia’ element there comes from the Greek for mind or cognitive faculties; the -phenia element may come from ‘phainein’ – Greek for ‘make appear’ – though it appears there’s some confusion over the etymology of ‘apophenia’. It’s sort of an antonym of ‘epiphany’ – which signifies an illuminating insight into to the innate reality of something.

I decided not to share any of this with E: she is only ten. Happy with her bunnies and unicorns, untroubled by apophenia. She’s heavily into slime at the moment.