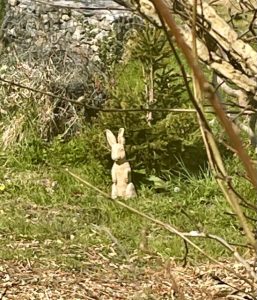 I have the ability to note an interesting piece of information, forget it, come across the same point at a later date and remember it all over again. I don’t think this is an age thing; I’m sure I’ve done this most of my adult life.

An example earlier this week: I read an article in the Guardian newspaper (link HERE) by Hannah Jane Parkinson extolling the virtues of apricity: ‘It was cold, but the sun had lingered, and there existed that glorious mix of chilly air and clear, bright skies.’ I turned to the OED for a formal definition (slightly abridged below):

[Verb form apricate:] 1.  intransitive. To bask in the sun.

1839    T. De Quincey Lake Reminiscences in  Tait’s Edinb. Mag. July 461/2   Not sunning, but mooning himself—apricating himself in the occasional moonbeams.

As I wallowed in the novel pleasure of this word, it occurred to me that I’d seen it before. I didn’t remember where or when, but it has the lustre of a half-memory. A search on the Guardian website revealed another article dated February 2019, explaining the same word. That would be when I first read it, inwardly noted it, then promptly forgot it.

Apricating this afternoon in my front garden reminded me that it’s a precarious activity; you could sit in a tee shirt, reading your book, then a blast of breeze hits the back of your neck and you reach for a padded jacket and put the hood up. Then feel too hot when the breeze drops and the sunshine beats back in.

It sounds like it’s related to the word April – the best month for apricity – but it isn’t. One popular theory is that ‘April’ derives from the Latin aperire, ‘to open’, as it’s said to be the month when the earth opens to produce new fruit (according to etymologist W.W. Skeat). But this is folk etymology, says Anatoly Liberman in his entertaining and erudite OUP language blog (link HERE). He’s also sceptical about the other explanation: that it’s from Etruscan Apru (Greek Aphro – “Aphrodite”). Though I rather like to think of April as the month of Venus.

Btw, Liberman has a fascinating trawl through the origins of another apr- word, ‘apricot’, in a follow-up blogpost HERE.

Anyway, apricity is an apt term at this time of year in southwest England: spring is well under way, as my recent posts have illustrated (blossom, buds, opening fruits). 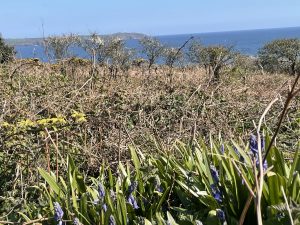 On Friday we went for a walk on the south coast. Bluebells were coming into flower (not very clear in my picture, I’m afraid), and it was a fine day for apricating: the air was chilly, but when we sheltered from the breeze there was a delicious warmth from the spring sun. We regretted not taking a picnic.

Over the weekend we reverted to one of our regular local walks. I’ve posted pictures of these horses before. 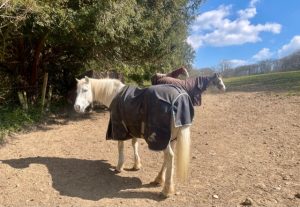 On this occasion they looked less mournful than usual, but they still have an air of melancholy – like they know something bad is about to happen that we’re unaware of.

The little statue of the perky hare at the top of this post is the nearest I’ve got for years to seeing the real thing. Not as big or scary as that giant rabbit that’s apparently been kidnapped in England this week. 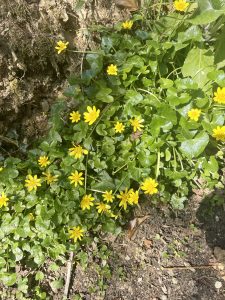 I wanted to try and capture in my pictures the effect of that spring sunshine on the scenery; these celandines (I think that’s what they are) and the foliage around them were gleaming in the light as if varnished.

I’ve made several batches of wild garlic pesto this spring, gathered from riverside woodlands nearby.  I’ve also stir-fried it in spring greens – delicious. This patch grows beside the lane we walk along, just before the horses’ field. 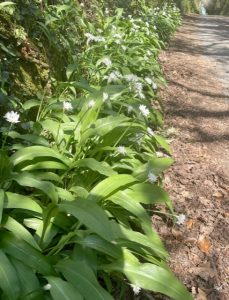