Austin Wright, who died in 2003, was for many years an English professor at the University of Cincinnatti. There he had the reputation for minute critical analysis of literary texts. I’m afraid this shows in his first novel, Tony & Susan, not entirely in a good way.

It’s technically superb: a taut thriller is embedded in another novel that struggles to emerge from its shadow. 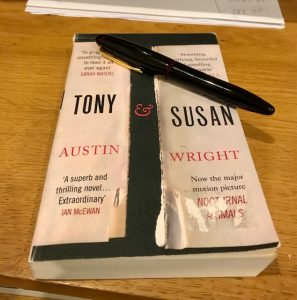 Susan is sent the MS of his first novel by her ex-husband, Edward with a request that she provide a critique: something is lacking in it, he says in his letter. They’d divorced after the wreck of their marriage, precipitated by his abandoning a budding law career to indulge his desire to become a writer. Susan wasn’t pleased: she thought he took for granted her complicity in this (to her mind) deluded dream, supporting his fantasy with her salary as a college English teacher.

You see what’s coming: Susan, a self-confessed severe literary critic, especially of Edward’s apprentice work when they were married, reads the novel that forms the basis of this novel. It’s a metafictional, self-reflexive premise that I never fully bought.

The novel-within-a-novel is called Nocturnal Animals – which is the title of Tom Ford’s 2016 film version (I haven’t seen it: I’d be interested to hear from anyone who has). Mild-mannered maths professor Tony, his wife Laura and teenage daughter Helen are driving to Maine. They get involved in a dangerous game of chicken on the highway that culminates in a minor accident. The occupants of both vehicles get out, and it all goes horribly wrong from that point.

The three men from the other vehicle turn out to be nasty individuals, and they force Tony and family into a terrifying ordeal. Tony is forced to question his adequacy and agency. The plot manipulates him into increasingly destabilising positions.

All of this is narrated with alternating sections in which we get Susan’s back story and her reactions to Edward’s novel as it develops. Here’s where I started to lose engagement: as a teacher of literature she evaluates Edward’s narrative that I’d just read, and her analysis occluded my own. I felt placed in a position of uncertainty in my own judgement. This is probably what the author intended, but if that’s the case, I didn’t care for it.

Susan also inevitably looks for a personal message in this rather gruesome story. Is her ex suggesting that she is represented by one of the characters in his novel? If so, which one: the academic, unheroic Tony, who feels guilty and ashamed that he can’t act more decisively to protect himself and his family? Or, even worse, the leader of the men who threaten them? Or the detective who tries to help Tony find the thugs, eventually by resorting to dangerously unorthodox methods that expose Tony to even more menacing dilemmas and confrontations?

Similar questions arise about Edward: is he represented in some way by one of the characters? If so, what might be his cryptic message to Susan?

Wright manipulates Susan’s response, and my own. I was assessing her assessment of Nocturnal Animals and attempts to interpret it in terms of her two experiences of married life – after divorcing Tony, she’d married Arnold, a philandering doctor and had three children – and Edward’s: he’d remarried too. Is his novel really an allegory of their two lives: is he suggesting that they made a mistake by divorcing, or is he just taunting her for leaving him?

As a postmodern puzzle dressed up in a noirish tale of violence and menace it’s entertaining in patches, but ultimately rather cold and…I don’t know, kind of pointless.