Time for a survey of recent reading.

John le Carré Silverview (Viking, 2021) This was passed on to me by Mrs TD: le Carré’s final published novel before his death two years ago. It’s a complicated story involving an ex city trader turned (non-bookish) bookshop owner who gets tangled up with spies, double agents and conspiracies. It’s entertaining as far as this kind of thing goes. The title is the name of the house where a shady former MI5 agent lives, imitating the name of Nietzsche’s house, of all people. I’d always thought the rural county of Suffolk was a peaceful, serene place to live (my parents and sister lived or still live there), but according to this novel it seems pretty much everyone in that part of East Anglia is involved in espionage and skulduggery.

William Boyd Love Is Blind (Penguin, 2019) I read this on the way back from Italy and left it on the plane, so rely on memory for this note. Brodie is a Scots piano tuner with a monster of a tyrannical father (a firebrand vicar-preacher, implausibly). Brodie falls in love with a Russian opera singer who’s also involved with a virtuoso concert pianist and his brutish brother. After hair-raising scrapes in various European cities Brodie finds himself in a remote jungle island assisting a pioneering woman ethnologist. As one does. The plot is even more complex than the le Carré. When Brodie discovers he has TB it gets even more tangled. The characters are a bit flat, but the descriptions of piano tuning are strangely engaging. This competent novel would have benefited from some editorial pruning.

Susan Hill The Comforts of Home (Vintage, 2019) Another handed on by Mrs TD. It’s one of a series, apparently, with the central character called Det. Chief Inspector Simon Serailler. It seems inevitable in this cop-centred genre that he’s a maverick rule-breaker and loner, despite being a serial flirt. The main crime (a murder on a Scottish island) at the heart of the plot is the least interesting part of the novel – it’s the relationships between Serailler, his GP sister and her husband, who’s also his boss, and her sons, that are the most entertaining aspect. There’s also a cold case (another nasty murder) that Serailler is put on to by said boss to ease him back into work after a horrific accident in which he’d lost his arm – an incident presumably from the previous novel in the series. I can’t say I’ll rush to read another one, though it’s all efficiently done, if a bit predictable.

Luke Francis Beirne Foxhunt (Baraka Books, 2022: ARC courtesy of the Canadian publishers). A cold-war thriller rather like early le Carré. In 1949 a Canadian writer called Lowell moves to London to edit a new magazine intended to promote Western literature, values and culture and its artistic freedom compared with the repressive regime of the Soviet Union. When a Canadian colleague is murdered he begins to realise all is not as it seems: the magazine’s backers are as sinister in their way as their enemies. The politically naïve Lowell undergoes a painful education in the amoral games played by these characters who lurk in the shadows. I’m not a huge fan of espionage novels, but this one is skilfully crafted and has an original premise and richly drawn characters. The revelation at one point that the Soviets were experimenting with advanced nuclear weapons is eerily pertinent given recent news about the brutal war/invasion in Ukraine and related developments.

There’s a foxhunt at one point, hence the title, but it’s not one as Trollope would have depicted it. 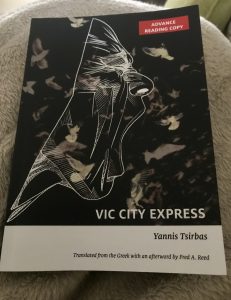