Who writes letters any more? It’s a pity so many of us don’t. An inherited box of letters provides the McGuffin for this novel. No one nowadays will be able to reconstruct a history and be transformed as a consequence, as the central characters do in Behind the Eyes We Meet, by accessing emails. They’d have been deleted anyway, and the technology is uncongenial, impersonal. 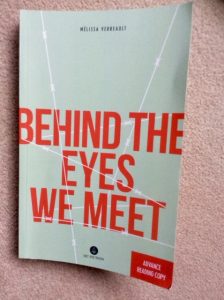 The structure of the novel is risky, but it works. It features two love stories and a war, arranged in three sections: the first and last are set in present day Montreal, where twenty-something Manue (short for Emmanuelle) and Italian-Canadian Fabio tentatively begin a relationship that is destined to change her life (and his); after an earlier, typically unsatisfactory sexual encounter with a stranger she met in the street, the narrator, ventriloquising her thoughts, concludes:

The truth was that she was fed up with casual flings, dead-end relationships, tense mother/daughter clashes, and ludicrous misadventures.

Her reputation preceded her: her life as a continuous string of unlikely events and impossible stories…But what served as a fascinating diversion to others was quickly becoming tedious to the protagonist. Manue dreamed of a boring life with a suburban routine. Just to know what it felt like to be someone ordinary and predictable.

This passage demonstrates the strengths and weaknesses of the novelist’s technique: there’s just a little too much exposition and explanation (and I omitted a sentence). Maybe the narrative could have been leaner, and the writer could have trusted her readers to figure out for themselves the nature of the characters through their actions and dialogue.

Where she does that, Verreault does a fine job. The premise is good: Manue is adrift largely because she’s discovered a shattering secret about her family, revealed under pressure by her mother. This changes her perception of her own identity, and explains why she feels so lost and bereft.

The middle third is a harrowing account of the brutal treatment of Italian prisoners of war in Russia during World War II. Sergio, whose love letters to his sweetheart from a TB sanatorium had opened the novel, is now revealed as the young man who wrote them. This is one of the most painful descriptions of war’s cruelties and the suffering human beings can inflict on each other that I’ve ever read. Its contrast with the light romantic tragi-comic opening couldn’t be starker.

The final third skilfully draws all these various threads of narrative together with a highly serious moral purpose, and reveals the way Fabio and Manue’s struggle to find their way resembles that of Sergio and his desperately courageous will to survive. Without that box of his and Luisa’s letters, that generate and reveal these interwoven narratives and voices, there would have been a different, sadder story.

Through these letters we learn the connections between Fabio in Montreal and Sergio, the young, traumatised soldier. When Fabio returns to his home town in Italy for a funeral, he realises he’s now deracinated: he could never return to his native land – it has nothing now for him. But he’s also never going to be fully integrated into what will always be for him a foreign country; he rejects Italy, where they take care of their dead, preferring to take his chances in Canada, which ‘takes care of its living’.

Ms Verreault has some pertinent and timely insights, arising from such narrative developments, about immigrants and integration in modern multi-cultural western society.

Manue acts as the bridge for Fabio between their two cultures, and provides the completeness he craves. He fulfils a similar function for her. And Sergio’s older love for his Luisa mirrors this relationship. The symmetry of the novel is one of its most pleasing aspects, and the fractures in the narrative – that three-part structure – serve it well.

Having found that opening section a little over-long, with a few too many self-consciously quirky details (the lost goldfish is irksome), I found by the end that I was deeply involved with these characters’ lives and travails, and found myself welling up at the end – something that doesn’t often happen when I read a book.

[Serena] didn’t realize they [these ideas and projects] were Manue’s way of channeling her existential angst and fending off madness. Emmanuelle sought to counteract life’s inconsistencies with her harebrained schemes. Wasn’t fighting folly with folly the best way to accept the fact that we have no control over our lives?

Once again there are perhaps just a few too many words there, but the central point is germane to the whole novel. What starts like a frothy romance turns into something much more serious and substantial, and the novel has some original and stirring revelations about the human condition, and a moving depiction of redemption and reconciliation emerging out of deep suffering.

Here’s an example of what I mean. It’s in the central section where Sergio endures gruesome hardship at the hands of his callous Russian captors. He’s one of a small group of Italians in a prisoner body of several nationalities; they’re being force-marched huge distances in viciously cold weather, starved and physically and psychologically tortured:

They sought to help and encourage each other, to fan the desire to cling to life. As the men lived without news of their loved ones for months, the Italians turned to each other, the only family they had.

Feeling this sense of fraternity when all faith has been lost is the only thing that can reconcile a being with his humanity.

Shortly after this a compatriot of his goes crazy in the face of these terrible ordeals, and starts reciting Dante:

Remolo had clearly lost his head, thinking poetry could be his saviour. He was wrong. Poetry has never delivered anyone from suffering. At best, it works to illustrate the latter brilliantly; more often, it hastens the damnation of the troubled souls it sustains.

One of the most interesting aspects of the novel is the adept handling of the narrative voice in such passages. The narrative focus there is on Sergio, who goes on to admit to himself that he envies Remolo’s capacity to find solace in the beauty of the words; the only verses Sergio knew by heart were a nonsense nursery rhyme – a recollection that takes him back, in a Proustian moment, to his home and his much-loved mother and family. By enabling the narrator to articulate such conflicting thoughts and emotions, filtered through the observing, sympathetic narrator’s sensibility, Verreault captures perfectly the ways in which we internalise and process our experiences and learn from them.

Pigeons, oddly enough, provide a leitmotif. It’s on marvelling at their homing skill, during a flashback from the war to his childhood, that Sergio has an epiphany:

One day he hoped to find such certainty, to feel without a doubt and in the deepest parts of himself that he had taken the right path, the just path – the way to an inner self.

I hope my quotations from the text have demonstrated not only the strengths of this novel, but also the deftness of the translation by Arielle Aaronson. Her sureness of touch contributes enormously to the satisfaction found in reading it.

The significance of the title emerges when it appears in this passage:

Everyone has an incredible story to tell. There’s no such thing as a straightforward life. We tend to think that some people’s lives aren’t the least bit interesting. But only because we know nothing of their family quarrels, their heartbreaks, their incurable illnesses, their sudden departures, their lost children, their devastating fires, their squandered fortunes, the noose around their necks. No more than we can know of the great joys that accompany those seemingly satisfied smiles.

We’ll never understand all the impossible things that lie behind the eyes we meet.

I’m sure most readers will be moved by this powerful, original novel – provided they can get over the foibles in the first section.

I Never Talk About It, a collection of short stories; second post on it HERE