I was browsing my shelves a couple of weeks ago for something new to read, and picked up my OWC copy of The Eustace Diamonds – the next in the sequence of Palliser novels after Phineas Finn (which I posted about HERE last summer). After skimming through the foreword by the text editor, WJ McCormack, and the first few pages of the introduction, I decided I wasn’t ready in this enervating lockdown for an 800-page, small-print whopper. Maybe when the weather perks up later in the spring.

There was an expression in that foreword, however, that stopped me short. McCormack is writing about the book trade and the business of producing new, modern editions of Victorian novels like this one in OWC’s Centenary Edition of the Palliser novels. Here’s the whole sentence:

[This Edition] has not entered into the fabulously expensive business of establishing new texts which, with bombinating minutiae, often retards or replaces the reader’s engagement with literary history.

‘Bombinating’. The context makes the meaning fairly clear, but I still had to look it up. Here’s the entry in the OED online for ‘bombinate, verb, in current use’ (as always, I’m grateful to Cornwall’s library service for making this resource available free to members):

To buzz, make a buzzing noise.

1880    A. C. Swinburne Study of Shakespeare (ed. 2) iii. 199   As easy and as profitable a problem to solve the Rabelaisian riddle of the bombinating chimæra.

1880    Daily News 21 June   The power of a chimæra bombinating in a vacuum to eat second intentions is scarcely less suggestive of a..solution.

The pejorative (and slightly pompous) sense in the McCormack sentence clearly chimes with that of the Rabelaisian citations here (I’ve resisted the temptation to explore that enigmatic quotation further; more detail is found at the Merriam-Webster site HERE: M-W links it to Greek ‘bombos’, from which derives the English ‘bomb’) – the (over-)subtle (or stringent?) textual forensics of academic literary scholars in editing texts by Trollope, giving too much information and thereby occluding the force of the text itself.

I was aware that the Latin bombus also signified ‘bumblebee’ – a word imitative of the buzzing or humming sound of winged insects in flight. Or so I used to think. Until I came across the Dec. 20 – Jan. 21 post on the OUP Etymologistblog by scarily erudite Anatoly Liberman (link HERE), which queried the sound-imitation notion (in a post that started off looking at the sounds and origins of the words kid, cub and bunny – it’s a brilliant blog for taking you down etymological rabbit (or bunny) holes), pointing out that the word possibly derives instead from ‘humble-bee’. OED states that another variant is the Harry Potteresque ‘dumbledore’. 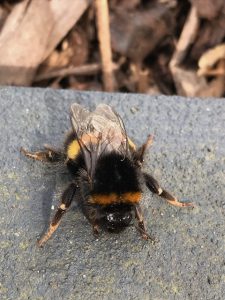 Coincidentally the next morning ended a long spell of cold, wet weather and dawned sunny and warm. When I stepped outside my front door I nearly trod on a large bee. It was very somnolent – or sick. Anxious that it would be squashed by someone, I coaxed it onto a leaf and carefully placed it out of harm’s way in a flower bed. When I returned an hour later it had gone – so I hope it had revived its spirits in the early spring sunshine and taken off to do whatever it is queen bees do in the spring: start a new buff-tailed colony?

I contacted the excellent people at our local wildlife trust, who have helped with identification of various critters for me in the past (the last time I posted about it HERE: a magpie moth). A very helpful man called John emailed back the same day with the information that my picture was of a buff-tailed bumblebee queen (bombus terrestris), adding ‘one of our most familiar bumblebees and one of the first to emerge each spring. As you discovered, they can be very sluggish when it’s chilly and they are still warming up.’

John provided a link to his organisation’s website entry on this bee (link HERE), which included this lovely bit of information about it:

Buff-tailed Bumblebees are known as ‘nectar robbers’: if they come across a flower that is too deep for their tongue, they bite a hole at its base and suck out the nectar. Afterwards, other insects looking for nectar will also use this handy hole. [This entry also has a lovely picture of a worker bee in this family, which instead of a buff-coloured tail has a sort of grubby white one]

Although I decided against starting this Trollope novel in my present disengaged reading state, I’m gratified for this small but (to me) fascinating piece of information about the only true and original ‘bombinator’. And a queen, a royal bombinator.