Berserkers went into battle, according to some sagas and skaldic poems, wearing pelts of animals (the ‘ber’ element may signify ‘bear’; ‘serk’ is a Germanic term for shirt): they thus took on the ferocity of the beasts metonymically. This concept lies at the heart of David Clerson’s extraordinary novel Brothers. 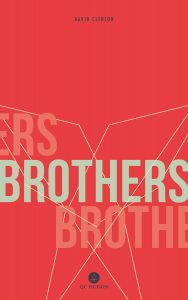 Clerson’s unnamed protagonist, Older Brother, undergoes similar therianthropy in this pulsating narrative. At the novel’s start he and his younger brother scratch a living on a bleak marshland straight out of Kosintsev’s ‘King Lear’, a Tarkovsky dystopia: a post-apocalyptic or pre-modern zone of sterility.

The brothers are deformed: the Older has one arm, his younger sibling has ‘atrophied’, brachial stumps and ‘the face of a pagan angel’.

Their dessicated, moribund mother tells them endless stories ‘of the fearful far away’, and etiologies including their own: she amputated Older’s arm when he was born to create the Younger’s body (as God did Adam for Eve in Genesis). She invents these stories to protect them from unpalatable truths. What those truths might be we can only speculate – that’s one of the mysteries that gives this novel its eerie power. It’s full of dreams – and nightmares.

Her core lesson through these stories lingers with the boys:

‘The world is a cruel place, too cruel to be faced alone.’

The sea-creatures washed up by the ‘Great Tide’, the ocean (that ‘infinite expanse of surging black water, unpredictable and menacing…sealing off their world’), are also deformed, monstrous – a giant dog, bug-eyed cephalapods. The boys construct ‘bone beasts’ from the detritus. They are taunted by neighbouring ‘leech-boys’, reacting to them with ‘a dumb, screeching rage.’ Is this a post-nuclear catastrophe? Or some hellish alternative world? ‘Everything was death.’

I don’t recall reading a novel with such visceral impact. The elemental imagery and saga ferocity are intense. Brothers packs a punch way above its 150-page weight. I don’t normally enjoy ‘fantasy’ genre fiction, but this transcends the genre.

The brothers traverse the estranging sea in a leaky boat to find their ‘dog of a father’ who ‘came from the sea’ – another of mother’s legends; her accounts vary, ‘his lore changing over time and according to the woman’s mood’. Their fraternal odyssey becomes mythic and terrifyingly violent. They are at first ‘still boys but becoming men.’ They are convinced ‘our future is the sea.’

Like St Brendan and his monks, they endure terrifying ordeals on their voyage. Older Brother transforms in a way that seems to confirm his father’s canine nature. Cynanthropy. Starving and emaciated, ‘His body thinned out, the body of a wandering saint, with dried blood encrusted in the hollows of his face, and the cruelty of the world in his belly.’ Brothers becomes an inverted hagiography, a legend of a heroic devil-saint.

Initially more timid than his exuberant younger brother, he gains confidence when isolated. After excruciating experiences with the pig-family who confine him to a dog-kennel, and the transcendent sexual encounter with a grey bitch, he flees and transforms again into a vengeful humanoid beast, with a new-found taste for blood, and a grim resolution to survive whatever the world tests him with.

His growing power and berserker ferocity are signified initially by his wearing the pelt of a drowned dog the boys found washed up on the beach. (There are aspects of Brothers that bring to mind the novel and film My Life as a Dog). This mantle enables him to channel his bestial savagery. When the grey bitch is killed, he takes on her pelt, too: his powers increase. This is White Fang without the sentimentality.

Myths and legends (and other novels) from all times and places resonate throughout the narrative. Apart from ancient Greek epics already alluded to, there are echoes of the Old Testament: the brothers are aptly described early on as ‘children of the valley of Hinnom’ – an alternative name for Gehenna, or Hell. They glimpse other worlds through their father’s imagined eyes:

There are flavours of Norse legend. Ravens accompany the older brother in the latter stages of his bloody quest, even appearing to talk to him (or is this part of his hallucination?) and perching on his shoulder, as they did with Odin. The first raven to land on the questing boat is an allusion to the Noah story. As he sails, the brother tells the birds stories of his past:

[B]ut he embellished his tales, telling them the stories his mother had told him, stories in which his younger brother dug tunnels under the hill…a realm of wonders…and sometimes a raven cawed at him in thanks.

When he hunts obsessively for the dark, submarine shape he takes for his father, under ‘the red of a falling sky’, the novel adopts the lyrical weirdness of Moby Dick:

He was getting closer to his dog of a father, like a whale he was going to harpoon…a sharp weapon, forged in steel.

His shape-shifting tendencies are found in shamanic societies from the North American First Nation to eastern Europe and Asia. So is the function of narrative to dramatise creation and growth: it’s a bildungsroman, but Older Brother is a sort of demented Holden Caulfield.

At times it becomes a little muddled. Just what is the Puppet the brothers find washed ashore meant to represent? It becomes a prosthetic arm, a war-weapon and ship’s figurehead, a ‘tribal totem’or Queequeg figure to the Older Brother’s wandering Ishmael; it’s also an obvious Pinocchio substitute. Maybe that’s the point: nothing in the narrative is what it seems.

Such inconsistencies don’t impede the narrative surge. It’s a katabasis story refashioned as surreal folklore, and a classic quest into a dark, nether world, a search for Home and Self and a means of forgetting the past, a demonic redemption song: the brothers (then the Older Brother alone) skirt the shores of their blighted land in their ramshackle boat, endure ordeals and battles that test them beyond endurance. Older Brother undergoes liminal rites that transform him from man to beast and back. Much of the time he’s in a trance-like state; he becomes a seer. Everyone tells tales. Like their mother’s tales, told to her by her mother: ‘songs with a little bit of magic, in a forgotten language – some know the words, but no one knows the meaning.’

His final vision is typically enigmatic, indecipherable, ‘the last rattle of a hallucinated life.’

The novel’s end is the beginning of a new story.

Originally published in French as Frères by Héliotrope in 2013, which won the Grand prix littéraire Archambault the following year, Brothers was translated into lucid, haunting English by the poet Katia Grubisic, and published in 2016 by the independent Quebec subscription imprint QC Fiction, to whom I’m indebted for this review copy.

Joseph at RoughGhosts who uses a terrific quotation from the text for his title: ‘everything here is dead’…