We’ve just said goodbye to our two English grandchildren, who came for their first visit in over a year. We hadn’t seen them since last August, so it was lovely to be together again. Lockdown restrictions eased recently, meaning we could start meeting other people indoors again. The weather was finally summery, and we were able to go to the beach. Mrs TD and the kids’ mum, who came for the final two days, went for a swim, joined by the 12-year-old granddaughter, but the water was a bit too cold for me.

Last week we paid our first social visit since before Christmas. Our friends who live nearby, the owners of those fine cats Iggy and Phoebe (they’ve featured a few times in the blog), invited us for coffee and cake. It was such a relief to mix with other people indoors, relax and enjoy stimulating conversation.

We admired their artworks, in particular a strange, vividly coloured crucifixion scene. They told us the artist was a Scot, Craigie Aitchison (1926-2009). They explained that the little dog looking up at the Christ figure, who returned its gaze, was the artist’s much loved Bedlington terrier. He features in many of his works, they told us. 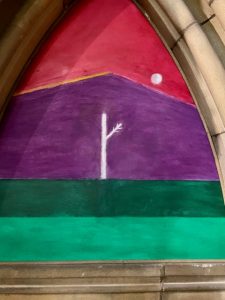 We took the grandchildren to Truro cathedral during the week to seek out the four Aitchison murals our friends told us were to be seen there. The style is very distinctive, with vibrant bands of colour and stark, strangely mystical images of the crucifixion scene.

This first one appears to be a tree, perhaps the one that provided the timber for the cross on which the crucifixion took place.

To its left is the first of the scenes depicting Christ on the cross. The same vivid bands of colour form the basis of the image. At the foot of 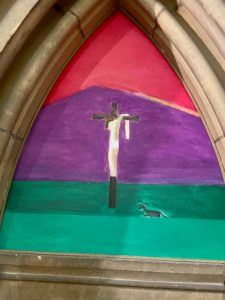 the cross, instead of the usual human figures (mourners, soldiers), the little dog walks up to it, perky ears raised. The Christ figure appears to hang from one limp arm on the crossbeam, head bowed.

Next to this is the first image of the Christ figure looking straight out at the viewer. The dog now looks lovingly up at him. A star shines brightly in the sky above, and streaks of light or energy emanate from the figure on the cross. A blue bird – presumably symbolising the holy spirit, perches companionably next to the figure’s left hand. 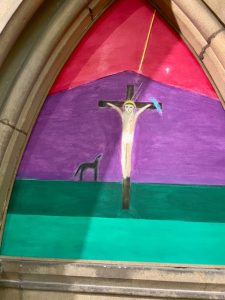 The mural on the far left of the four panels is a sort of mirror image of the first. This time the Christ figure’s right arm hangs over the crossbeam. The dog is no longer present. 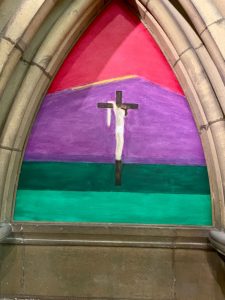 I’m not sure how to read all the imagery, but each picture glows with a quiet energy. Despite the painful iconography, the simplicity and…I don’t know…charm of the scenes leaves me with a sense of happiness and hope. I’m not a Christian, but I can respond to the serenity of these images. 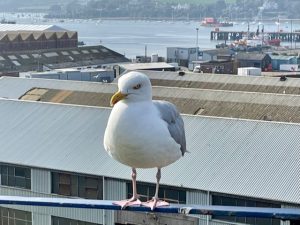 After our trip to the beach, we took the children to Falmouth docks, where we hoped to see the Estonian cruise ship that’s to be the floating hotel for some of the hundreds of extra police officers being brought in to police the area for the G7 conference. This takes place next week in Carbis Bay, near St Ives. The ship wasn’t there, but I liked the grumpy expression of this seagull perched on the railings above the docks. 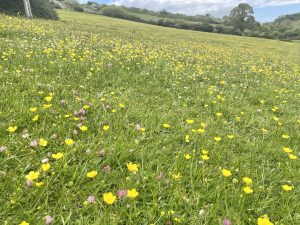 When the children had left for home with our daughter yesterday we went for one of our local walks. Here to end this post is a view of the horses’ field that’s featured in previous posts, now a mass of shimmering yellow buttercups, with pink clover among them. A circling buzzard overhead isn’t discernible in my picture, but it’s good to know it was there, keeping an eye on things below. Despite the rather hazy focus, I hope it’s still possible to see the beauty of nature.

Back to books next time (probably). 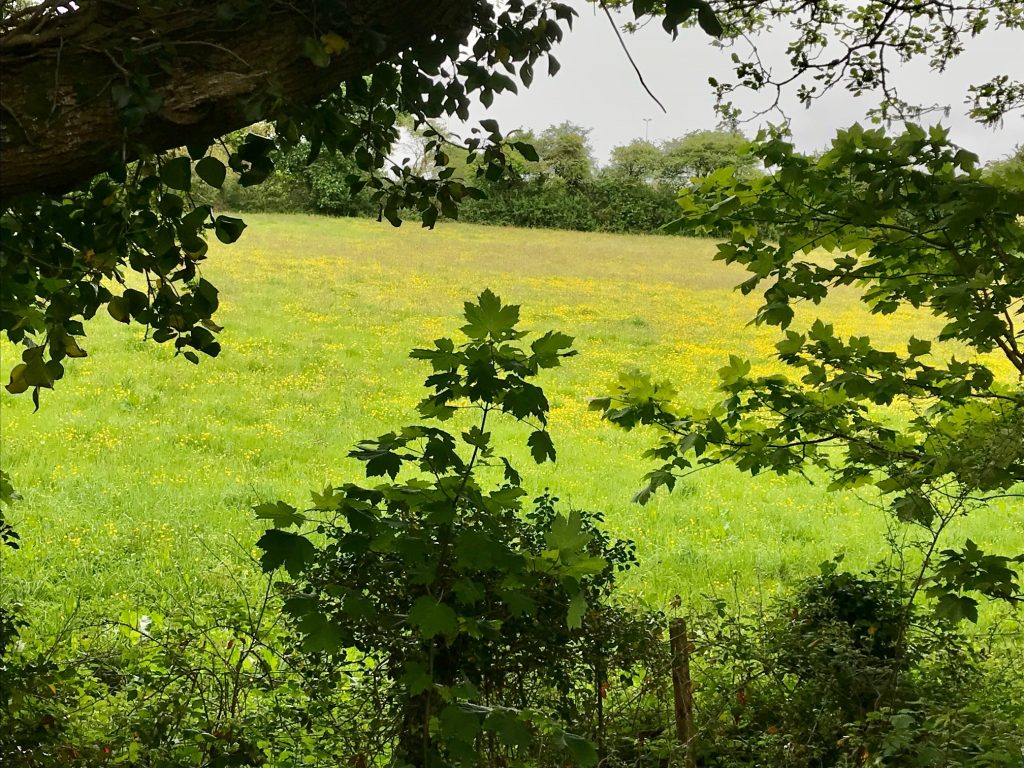