Patricia Highsmith, Carol. Bloomsbury pb, 2014. First published in the USA as The Price of Salt in 1952

Squeezing this last post in this month before I go on my travels, so there’ll be a hiatus here at TD for a while.

I’ve not read Patricia Highsmith before, but had read some very positive reviews of her psychological thrillers, and have seen films like Strangers on a Train (directed by Hitchcock in 1951) and The Talented Mr Ripley. Carol is very different.

The author explains in an Afterword that the inspiration for the novel came in 1948, soon after she’d finished Strangers, and was living in New York. Being short of cash she took a temporary job in a department store as a sales assistant in the toy department. Like Therese in the novel, she was assigned to the doll section:

One morning, into this chaos of noise and commerce, there walked a blondish woman in a fur coat. 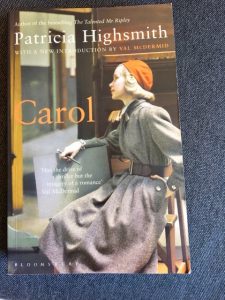 She went home and wrote up an 8-page story outline in her notebook. This was one of those germs of an idea that Henry James has written about; they simmer in the author’s mind for a while and then emerge as works of fiction.

Here’s how the scene plays out in the novel:

Their eyes met at the same instant, Therese glancing up from a box she was opening, and the woman just turning her head so she looked directly at Therese. She was tall and fair, her long figure graceful in the loose fur coat that she held open with a hand on her waist. Her eyes were grey, colourless, yet dominant as light or fire, and, caught by them, Therese could not look away.

The 19-year-old Therese, an aspiring stage set designer, has had a coup de foudre. What follows is a compelling account of a passion that turns out to be mutual, but beset by the hostility and prejudice against lesbian relationships that were prevalent at the time – and still are, sadly, in some places.

Carol is a wealthy housewife in her thirties, married but soon to be divorced. Her husband uses the situation to ensure he is awarded custody of their little girl.

Therese and Carol go on a road trip out west. They are being followed by a detective hired by the husband. He’s as cynical and unsympathetic as the man who hired him, and the society that spawned them both. The cat and mouse pursuit and suspense that follows is heart-stopping and makes for a compelling read.

Carol was played beautifully by Cate Blanchett in the 2015 film (directed by Todd Haynes).

Not surprisingly, Highsmith published the novel in 1952 under an assumed name; her usual publisher wouldn’t touch it because of its lesbian theme. Big mistake: it sold over a million copies when it came out in paperback.

There’s an excellent introduction in this Bloomsbury edition, by Val McDermid. As she says, it’s ‘a polished and accomplished work’. I recommend it.