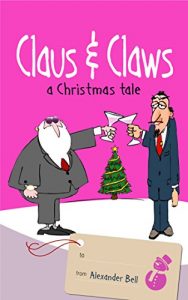 One summer’s day Santa Claus is hoeing his garden, feeling hot in his red suit, ‘but he had to keep up appearances’. Thus begins this charming retelling of the Santa Claus story, with a hint of Dickens’ A Christmas Carol but with a more steely, less sentimental glint in its eye – more like Wall Street in fact.

After hitting his head in the vegetable plot, Santa undergoes a personality change – he develops a taste for Coke and fast food, and starts to be bossy and overbearing with the genial elves, who are bewildered by his new manner. Rudolf faces an uncertain future.

I shan’t say too much more about the plot, except that Santa’s new friend, Nick Claws, has a particularly sinister, Machiavellian air (hint to children: speak aloud his alias, ‘B.L.Z. Bubb’ with an American ‘zee’). Dastardly Nick encourages his polar friend to adopt an entrepreneurial approach to the usual task of delivering presents to the children of the world. He outsources gifts to a tacky, cheap Chinese outfit. He sacks the elves and reindeer. They won’t even be delivered on the night before Christmas. A new callousness has taken over.

Drastic action has to be taken to save the situation.

This story will delight children of most ages: my ten-year-old grandson loved it – he didn’t get the ‘Nick’ references, but this didn’t seem to spoil his pleasure. Adults will enjoy the gleeful satire on the commercialisation and rampant consumerism of Christmas. I write this after the now annual madness in the UK of a US-style ‘Black Friday’ that seems to last a fortnight.

According to his profile on the Amazon Kindle site, where this e-book is available, Alex Bell has spent many years in marketing: it shows. This story skewers the amorality of corporate practice with wicked glee.

Claus & Claus has some good jokes, too (like Nick’s being described during an excruciating corporate golf match as being a ‘demon’ on the course – how could grandson not get that?! ) It only flags occasionally, and would make an excellent filler of virtual stockings. It’s just long enough at the equivalent of 112 pages to deliver its Scroogean message.

The Empress penguin of the South Pole is delightful: she and her fellow penguins manage to make just standing around on the ice look purposeful. She’s the one who has the vision to perceive what Nick Claws is plotting, using Santa as his dupe: Christmas, she realises, will cause ‘nothing but unhappiness’:

“Santa will be held responsible and his name will be reviled throughout the globe. The custom will quickly die out and cease to exist. There will be nothing to bring joy and happiness in the mid-winter when people need it most, no moment for people to consider their fellows and extend towards them love and humanity.”

A salutary story for us all.

PS Dec 12: Alex informs me this is now available as a paperback at Amazon.