Fragments of narrative from different periods of history with different characters gradually coalesce and cohere into a story about endurance, conflict, love and loss – and lots more in between. 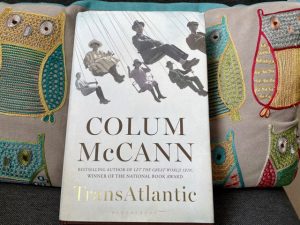 TransAtlantic opens in Newfoundland in 1919. Alcock and Brown make the first non-stop flight across the Atlantic to Ireland. That Canadian-Irish connection is one of the elements that binds the fragments together. A local reporter of Irish descent, Emily Ehrlich, and her photographer daughter Lottie, cover the story. Lottie gives a letter to Brown and asks him to deliver it to the recipient in Ireland. The fate of that letter, what happens to Lottie and others around her, form the basis of the novel.

One of the other elements is the slightly incongruous story of a fund-raising/lecture tour of Ireland made by the former slave Frederick Douglass, who was campaigning to raise support for the abolitionist cause. The people he meets are part of the mosaic of narrative fragments that form the final finished picture of the novel.

We also see Senator George Mitchell as he commutes between his American home and family and the peace negotiations he chairs in Northern Ireland.

These various narratives are told with verve and plenty of local colour. There are weak characters and strong, sad and happy. Just as in real life. Many of them have their lives destroyed by war, terrorist acts and humankind’s general capacity for cruelty.

Somehow for me it didn’t entirely work: the parts are better than the whole. Partly I think the complex structure is over-contrived. Also the prose style has some irritating features. I’ve complained about this kind of thing before, I know, and I should maybe be less picky. But McCann loves making paragraphs and sentences out of tiny fragments, perhaps because he thinks this reflects the novel’s larger structure. Here’s a random example; a middle-aged woman stands and watches Douglass across a crowded room – she hasn’t seen him for years, and recalls the last time, when she was just seventeen and a housemaid:

Standing outside Webb’s house. Bidding him goodbye. The early Dublin light. The shaking of hands. So unusual. The creak of the carriage. Later the butler, Charles, rebuked the staff. How dare you. The smallest moments: they return, dwell, endure.

The prose here is perhaps a reflection of the fragmentary nature of the woman’s fleeting thoughts and memories, those ‘smallest moments’. But almost every page has at least one paragraph in that similar staccato style. Where we’re not privy to a person’s stream of consciousness/thoughts. It’s just the narrative style. Too many minor sentences. Like these.

McCann is also capable of some beautifully lyrical descriptive passages. I’ll end with a couple of examples, to redress the balance of this post. Here a group of people is driving in a car towards Wales:

They pulled up to the edge of a field and watched a falconer ply his art: the bird being trained on the end of a string, the long curl of his flight slowly learning its limits. It hovered a moment, then landed superbly on the falconer’s glove.

I’m not sure I fully grasp the significance of how ‘his’ and ‘its’ combine in that sentence, but that adds somehow to the almost mystical nature of this apparently inconsequential scene. Except the novel started with two aviators’ long ‘curl of flight’ across the ocean, learning their limits and those of their warplane converted into a transatlantic migrant – a raptor trained to land peaceably, superbly, in an Irish bog.

And again, a scene that becomes of central significance – an Irish lough:

The lake was tidal. It seemed to stretch for ever to the east, rising and falling like a breathing thing. A pair of geese went across the sky, their long necks craned. They soared in over the cottage and away.  They looked as if they were pulling the colour out of the sky. The movement of clouds shaped out the wind. The waves came in and applauded against the shore. The languid kelp rose and fell with the swells.

There are some lovely images, rhythms and sounds there – it’s prose poetry. Once more it’s more than just decorative scene-setting. Birds in flight remind us of that transatlantic flight. The image of the waves ‘applauding’ shouldn’t work, but does. Same with the awkward aptness of the clouds’ movement that ‘shaped out the wind’. Why ‘out’? It’s the wrongness of the word that’s right for this aerial event.

Not an entirely successful novel, then, but it has some fine moments and stirring scenes.