There are only two major works of Edith Wharton’s that aren’t set in her own world – high society, affluent New York and Europe. Last time I wrote about the winter-set Ethan Frome. Summer, published six years later, is its counterpart, her ‘hot Ethan’ she called it. Gone is the bleak iciness of the earlier story – this short novel begins with scenes full of the warmth of this season. Until later, when autumn comes and events take a darker, chillier turn. 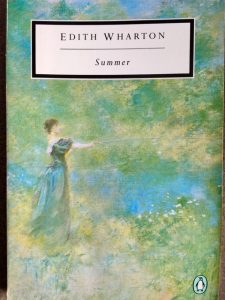 It opens with a seventeen-year-old girl emerging from lawyer Royall’s house in North Dormer, Massachussetts (again it’s set in the area similar to the Berkshires where the author had built a house and got to know the locality and its dour rural inhabitants), and the lyrical description sets the tone for the first part of the novel:

The springlike transparent sky shed a rain of silver sunshine on the roofs of the village, and on the pastures and larchwoods surrounding it. A little wind moved among the round white clouds on the shoulder of the hills…

She shrinks away from the figure of a young man in the street, a stranger with a ‘holiday face’, and looks critically at her ‘swarthy face’ in the hall mirror, wishing she had blue eyes like Annabel Balch – a society girl who sometimes visits.

“How I hate everything!” she murmured.

She repeats this statement more than once in this opening chapter: clearly she is discontented. We soon find out why:

North Dormer is at all times an empty place, and at three o’clock on a June afternoon its few able-bodied men are off in the fields or woods, and the women indoors, engaged in languid household drudgery.

So there’s her reason: drudgery is her lot, and all she has to look forward to in this torpid, desolate, repressed place. There’s more:

There it lay, a weather-beaten, sunburnt village of the hills, abandoned of men, left apart by railway, trolley, telegraph, and the forces that link life to life in modern communities. It had no shops, no theatres, no lectures, no “business block”; only a church that was opened every other Sunday if the state of the roads permitted, and a library for which no new books had been bought for twenty years, and where the old ones mouldered undisturbed on the damp shelves.

Soon we learn that this is Charity Royall, adopted daughter of the burnt-out, hard-drinking lawyer who’d “brought her down from the Mountain” – a wild, lawless region nearby where no respectable person ever goes. Her ‘tainted origin’ adds to her sense of estrangement; ‘she was the child of a drunken convict and of a mother who wasn’t “half human” and was glad to have her go.’

She knew that, compared to the place she had come from, North Dormer represented all the blessings of the most refined civilization.

The young man she’d glimpsed in that opening page turns out to be Lucius Harney, a rare sight in this village, for he’s from the city, educated and artistic. He’s an architect who while visiting his cousin is researching and sketching the old houses in the area; these were once grand and imposing, but were not valued by the locals, and have fallen into disrepair or been abandoned. This is the moral and cultural void which has inspired in Charity such dismal feelings of ennui and longing for escape – a theme prevalent also in Ethan Frome.

All seems set for a romance that will enable her to find fulfilment and escape to a fuller life, one with love and prospects. Sadly, as in Ethan Frome, dreams shatter, love brings pain and humiliation.

So what’s its significance? Elizabeth Ammons in her introduction sets out in detail the historical and biographical context: Wharton had been working with refugees in war-torn France as she wrote the novel, hence perhaps some of the key motifs and situations in it. She’d found passionate love at last after an arid marriage – which would explain the passionate sexual and emotional awakening that Charity experiences – and the misery that tends to accompany such cataclysmic changes when the loved one is fickle or flawed.

But is it, as Ammons suggests, a sort of allegory for the colonial oppression and racism of the white European nations blowing themselves apart in WWI? Or of the shameful racism and xenophobia of early 20C America in its dealings with former slaves and later with the huge numbers of immigrants? Both are plausible readings.

How then to interpret the Mountain? The ‘savage misery of the Mountain farmers’ which made the impoverished crudity of North Dormer’s villagers seem comparatively affluent and desirable? Near the end of the novel the girl travels there, vaguely in search of her mother and some new connection, and experiences instead a ‘tragic initiation’:

Charity vainly tried to think herself into the life about her. But she could not even make out what relationship these people bore to each other, or to her…mother; they seemed to be herded together in a sort of passive promiscuity in which their common misery was the strongest link. [my ellipsis to avoid spoilers]

She tries to picture what her life would have been if she’d stayed in this purgatorial place, ‘turning into a fierce bewildered creature’ like the wild girl she’d encountered on arrival – yet she feels a weird ‘secret affinity’ with that girl – who may even be a relative of hers.

Wharton seems also to be appraising the ahistorical, amoral underbelly of rural America at that time, the capacity of the uneducated, alienated, indifferent villagers like those of “dormant” North Dormer, to be surpassed in their primitivism and state of socio-cultural atrophy by these inbred hillbilly close cousins. The theme of incest that Ammons discusses is clearly a feature in this Mountain world. It’s as if the rural poor that Wharton had seen in the Berkshires and discussed as she passed such places with Henry James in her large car had impressed her with the bleakness and animality of their lives.

Is this snobbish elitism? In some ways, yes. But the richness and empathetic warmth of Wharton’s portrayal of Charity, and the growth and changes she undergoes, the exploration of life’s constraints and barriers for most women at the time it was written, lifts the novel into a higher artistic realm, where we learn what it is to be fully human, even when all around us humanity (and sexual and marital relations in a dysfunctional patriarchal  world) seems absent, selfish, cruel, even obscene.

It lacks the visceral punch of Ethan Frome, but is still a powerful, moving depiction of a strange but recognisable, dying world. 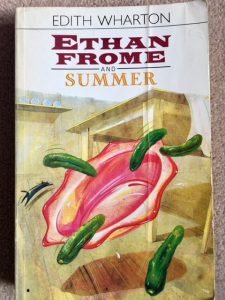