February was a busy month for me at work; my intended post on Alfred Döblin is still on its way.

Last week I visited friends in London and thoroughly enjoyed the John Singer Sargent exhibition at the National Portrait Gallery. I took particular pleasure in seeing his painting of Henry James that I used in a recent post on his story ‘The Author of Beltraffio’.

Back in Nov. 2013 I posted on ‘hypocorism’ – people’s names as diminutive or pet forms like Billy for William. I went on to consider mononyms, anthroponyms, endonyms, exonyms, and so on.

Just now I encountered a tweet from the OED with a similar term that I’d not previously known: APTRONYM: A name regarded as (humorously) appropriate to a person’s profession or personal characteristics. It can also be spelled (or spelt!) APTONYM.

Among the citations in the OED online are these:

1986   Los Angeles Times 16 Feb. vi. 1/1   According to the American Name Society, they’re called aptonyms, that is, surnames which..have turned out to be incredibly apt. A brief search for local aptonyms produced Tommy Trotter, the new director of racing at Hollywood Park.
2002   Winnipeg Free Press 19 Jan. a14/2   He began collecting aptronyms 30 years ago, when he saw an ad in his local paper for a flower shop operated by Flora Gardner.

There’s a long list of aptronym surnames at Wikipedia, such as a German professor of psychiatry who specialises in anxiety, and is called Jules Angst; there’s a gardener called Bob Flowerdew who regularly appears on BBC Radio 4 shows about the subject; Lord Judge is the Lord Chief Justice of England and Wales; Arsène Wenger is the manager of Arsenal football club, the London Premier League side.
I knew a kid at school with the unusual family name Soldier. His parents, with more wit than sympathy, named him Roman. As in Polanski – which is itself a kind of aptronym; here’s the etymology of the surname at the website Ancestry

Polish (Polanski): ethnic name for a Pole, or more specifically for a descendant of the Polanie, one of the original Polish tribes.Polish, Jewish (eastern Ashkenazic), Ukrainian, and Belorussian: topographic name for someone who lived in a clearing, from polana ‘glade’, ‘clearing’ (a derivative of pole ‘field’), or a habitational name for someone from placed called Polana, Polanka, Polany, or any of various other places named with polana.

The OED compares aptronym with EUONYM – also new to me: it derives from the Greek element ‘eu-‘ meaning ‘good’ or ‘well’. OED online defines it as  ‘An appropriate or well-chosen name; (formerly in technical use) a name that conforms to the requirements of a particular system of nomenclature.The term was popularized by its appearance as the winning word in the 1997 U.S. National Spelling Bee competition.’
Its first citation is from 1889, which states that it’s the opposite of CACONYM (‘An example of bad nomenclature or terminology, esp. in biology and botany.’), in which the prefix derives from the Greek for, not surprisingly, ‘bad, evil’. Hence ‘cacophony’ (opposite of ‘euphony’). I rather like OED’s most recent citation:

1956   Nat. Cactus & Succulent Jrnl. 2 3/1   A name may qualify as a caconym in different ways. First, from sheer length… Second, from the clash of consonants making it difficult (for a European at least) to articulate. 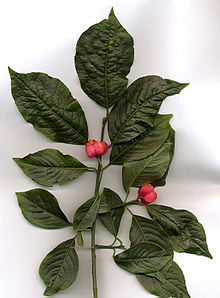 Which reminded me of the plant EUONYMUS, defined by OED online thus:

A genus of shrubs (family Celastraceæ), of which many species are now cultivated as ornamental plants. The only British species is the Spindle-tree, otherwise known as the peg-, prick-, skewerwood from the uses to which its wood is applied.

Pliny says that the flowering of the euonymus was a presage of pestilence; hence it seems probable that the name ‘lucky’ was given with euphemistic intention.

I love the way one word leads to another. A linguistic dérive…