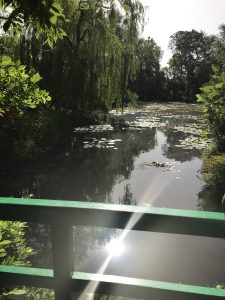 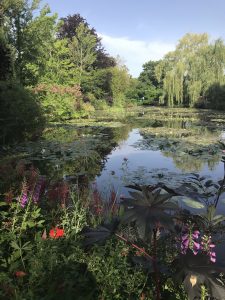 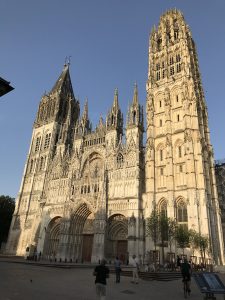 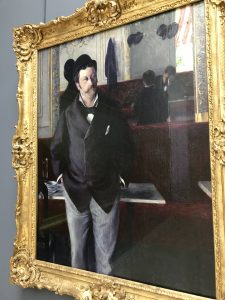 I’ve just returned with Mrs TD from a wonderful holiday by rail to Switzerland via London and Colmar. As I prepared a narrative with pictures I realised it would need more than one post.

After travelling from Cornwall by train to London we checked into our hotel in that literary hotbed, Bloomsbury (home of the Virginia Woolf burger), then walked to the British Library. I’d worked often in the old home of the BL in the British Museum, usually in the manuscripts reading room or the old, domed Reading Room, now an exhibition area and café. This was the first time I’d entered the new place. 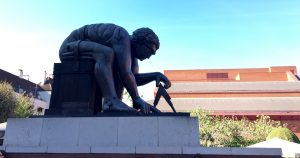 The outside of the building is rather forbidding and prison-like, with a huge number of red bricks and very few windows. Inside is airy and bright. We looked in the Treasures room and marvelled at some beautiful manuscripts and books. Must go back and have a proper look. There are some interesting touches and humorous details, like the bench in the shape of a book, chained to a huge cannonball to stop it being stolen – a witty take on medieval chained libraries, like the one at Hereford. 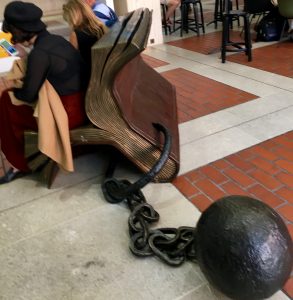 We had to move on to St Pancras Renaissance Hotel, where we were to meet old friends for a drink prior to a meal at the new Ottolenghi restaurant near Oxford St (delicious).

I remember this imposing Victorian Gothic cathedral to the train from my student days when I often passed through the station on trips to London from Luton, where I lived for a few. Like the BL, it’s a brick structure, but of contrasting colours. It was designed by Gilbert Scott and opened as a hotel and rail terminus in 1873. It was refurbished, restored and reopened as a sumptuous hotel in 2011, having narrowly escaped demolition. 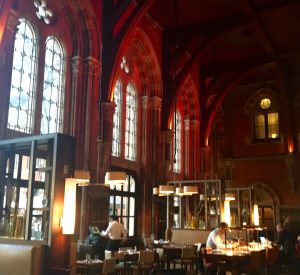 The bar where we had our g & t, in the splendid old booking hall of the station

Who was St Pancras? A Roman Christian convert, martyred at the age of 14 during the Diocletian persecutions around 304. He’s known as one of the ‘ice saints’, a trio whose feast days fall between May 11-13, dates which in northern Europe are traditionally believed to bring the last frosts of spring.

St Pancras old church, further along Euston Road, is one of the oldest Christian sites in England.

Next morning via Eurostar to Colmar, and old town in Alsace, France. We stayed with our group in the hotel opposite the station, another fine example of the late 19C fashion for grand statements of steam power. 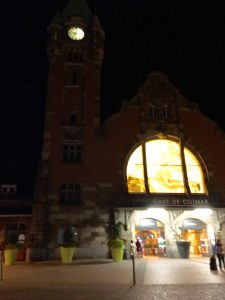 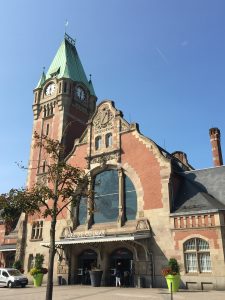 I’d never been to this part of Alsace. It was part of Germany from 1871 after the Franco-Prussian war, then returned to France after WWI in 1919. The old town is lovely, full of wooden-framed and gabled houses, very Germanic. The central area around the canal is known justifiably as Little Venice. Breakfast on the terrace outside the old covered market, where farmers would land their produce for sale, boated in from the country farms. Nowadays electric-powered punts ply tourists along the tranquil canal. The bridges are so low they all have to duck their heads when passing under them. 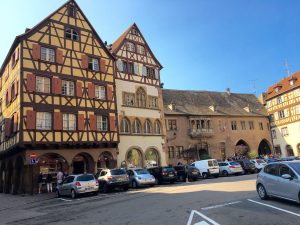 At lunchtime we boarded another train and headed for Grindelwald, Switzerland, via Basel and Interlaken.

I took with me to read a novel by Patricia Highsmith (I posted on her novel Carol last year HERE ) and a collection of prose pieces by Swiss author Robert Walser, both of whom have featured here at TDays. Our days were so full, however, I didn’t get much time for reading, and only finished the Highsmith earlier today, back in Cornwall. More on that another time, too.

Here’s a taster of what we were about to experience in the breathtakingly beautiful Swiss Alps. More on this part of the trip next time… 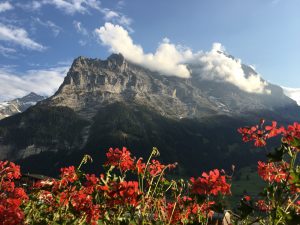 This was the view from one of two terraces to our hotel room: the Eiger 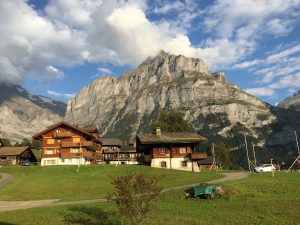 And this is the view from the terrace at the side of our room: another mountain – I think the Wetterhorn