Stefan Hertmans, War and Turpentine. Translated from the Dutch by David McKay. Vintage paperback, 2017. First published in the Netherlands, 2013. Long listed for the Man Booker International Prize in 2017

It was the two excellent translations from the Dutch by David McKay that I read earlier this year that inspired me to take up this Flemish novel: they were Max Havelaar by Multatuli, and Adrift in the Middle Kingdom by J. Slauerhoff.

The subject matter could hardly be more different across the three novels. War and Turpentine is an interesting, largely successful blend of autofiction and the highly traditional device of using a ‘found MS’ as the basis of the narrative.

The Flemish poet and novelist Stefan Hertmans writes that he was given a set of handwritten notebooks by his much-loved, deeply devout Catholic maternal grandfather, Urbain Martien, shortly before the old man’s death in 1981 at the age of ninety. He’d started writing them in 1963 when he was seventy-two, and spent the next seventeen years on them.

But it’s not that simple. We learn that his marriage had not been idyllic, and that there was a ‘personal tragedy’ during the Spanish flu epidemic of 1919, after which his handwriting – like his life – became ‘deformed’. The first notebook is full of ‘copious detail’ about the ‘humiliating poverty’ of his childhood, with ‘too many personal anecdotes’. The reader is likely to disagree with this harsh personal criticism. 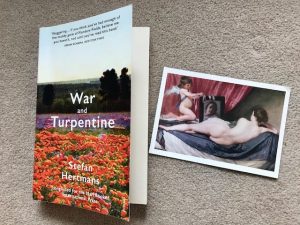 We learn about the hunger, deprivation and squalor in which Urbain and his siblings grew up in Ghent. Franciscus was a ‘lowly’ painter of religious frescoes and murals in churches and chapels. Urbain’s mother, Céline, is in some ways the true heroine of the novel. There’s a stirring scene when she walks for days to intercept Urbain’s army unit and browbeats his commander into letting her spend some time with her son; even the bullies of officers grudgingly respect her bravery and devotion.

Born into a wealthy bourgeois family, she married the penniless artist in defiance of her family’s disapproval. It was a true love match, and the marriage gave Urbain a model of marital harmony and contentment that he was sadly unable to replicate.

Urbain learned from his father Franciscus a love of art, painting and copying. He was ‘staunchly traditional’ in his approach, and deprecated modern ‘daubers’ like Van Gogh and Ensor. It’s notable that he specialised in copying the old masters; his own original work was accomplished, but of limited scope and ability.

This diffidence about creating something original out of others’ handiwork is seen also in the author’s metafictional approach to producing this novel. How far should he adapt Urbain’s error-strewn blend of ‘old-fashioned grace and awkwardness and authenticity without falling into mannerism?’ Adapting ‘his long-winded narrative into modern idiom’ was like ‘betraying him.’ He has to ‘rediscover’ the ‘authentic story’ in his own way: the basis of any ‘literary work.’

Like Franciscus with his fresco restorations, or the less talented Urbain copying the Rokeby Venus.

The novel is full of vivid set piece anecdotes that would work very well as film. There’s a gut-wrenching, infernal scene where Urbain is taken to see a gelatine factory at work. Also memorable are Urbain’s painful experiences as a lad working in another hellish location: an iron foundry. He sees some terrible things, and is physically scarred by the boiling hot molten iron.

But these scenes are eclipsed by his searing account of combat in Flanders. In the second notebook Urbain set out to:

write only about the war, truly and sincerely, not to glorify it. So help me God. Only my experiences. My horror. [Author’s emphasis]

This included his ‘traumatic scenes on the Yser’, how he was wounded three times and sent to convalesce in France and England. In Liverpool there’s one of the most transcendent and moving scenes in the novel, when he finally discovers the murals that his father had been commissioned to paint in a chapel there. Urbain recognises in the faces of some of the religious figures members of the artist’s family; Franciscus evidently felt able to indulge this loving impulse, believing that no-one who knew him would ever see them.

Later, the Hertmans-narrator has a similar, equally poignant epiphany when he recognises a familiar face in one of his grandfather’s meticulous copies of an old master’s famous painting.

There are the terrible descriptions we’ve become too familiar with from other accounts of WWI. The squalor, rats, filth, disease, slaughter, and constant fear of sudden death, witnessing the ‘torn-up limbs’ and desecrated corpses of comrades who’d moments earlier had been vibrantly alive.

There’s an astonishing scene when Urbain is startled by the sight of countless terrified wild animals swimming across a body of water in the polder to flee the carnage in their habitat. (Hertmans throughout the narrative has a poet’s and artist’s eye for nature, like the skeins of wild geese that fly overhead at several key moments.)

What distinguishes this long middle wartime section of the novel from most other accounts of WWI combat is that Urbain is recounting the decimation and defeat of a culturally/ethnically divided Belgian army fighting to defend its homeland. The rank and file like Urbain are Flemish-speakers; the Walloon officer class are francophone, who treat their men – these ‘cons de flamands’ says one commander – with patronising disdain.

Instilled with the values of the 19C, the soldiers are trained in outmoded military techniques like fencing. Knowing he’d spent four years in the military before the war, Urbain’s commanders exploit his combat skill and ingrained sense of discipline to send him on suicidal missions the others shrink from – this is what gets him wounded. Yet his restrained response to his incompetent, scornful officers’ incompetent commands is to salute and say, in the language they arrogantly insist on, “à vos ordres.”

They are outnumbered by a vastly better equipped, ruthless 20C enemy that uses the latest, most deadly machine-guns, heavy artillery and tactics, without ‘moral scruples’. They employ dirty psychological tricks and hideous new technology, like mustard gas. The Belgians are doomed from the start.

There’s a Sebaldian quality in Hertmans’ approach: the focus on history haunting the present day. He even incorporates, like Sebald, grainy monochrome photographs of characters, scenes and paintings featured in the narrative.

Near the end is one of many ecphrastic accounts of a painting by Hertmans’ grandfather, but the old man ‘couldn’t expel the soldier from his first self-portrait, and thus failed to do himself justice’. Hertmans goes on with another such account, about one of Urbain’s copies – of a Rembrandt portrait of a helmeted soldier (also reproduced on the page). There’s another epiphany-recognition by the narrator about the distracted, wistful expression in the eyes of this soldier. This expressive substitution enabled his grandfather to achieve ‘an extraordinary victory of the painter over the soldier’. The conclusion the narrator draws has a Sebaldian resonance:

The truth in life often lies buried in places we do not associate with authenticity. Life is more subtle, in this respect, than linear human morality. It goes to work like a painter-copyist, using illusion to depict the truth.

It’s a powerful, original and affecting novel, less richly nuanced and psychologically complex than Sebald’s fiction – but that’s true of most other novels.

There’s an interesting pair of essays by David McKay at his own website, Open Book Translation, on his methods and problems in translating this novel; he discusses how he struggled to reproduce authentically, for example, the Edwardian and military slang of the characters without traducing the original. Another layer of metafictional commentary on the literary arts of copying, verisimilitude and originality.