Another book loan from my friends the owners of those imperious cats, Igor and Phoebe. 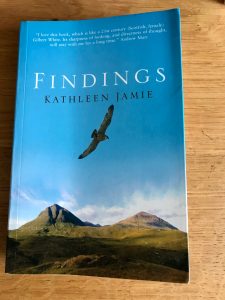 Kathleen Jamie is a Scots poet. This book of short essays ranges in topic from birds and other wildlife, archaeological sites in Scotland and the Hebrides, to her husband’s grave illness after pneumonia, the view of Edinburgh’s lofty steeples and weathervanes, and its medical museum.

To call her a nature writer is to oversimplify. In an essay called ‘Markings’ she traces the cup-rings – circular carved shapes – scraped into the rock by Neolithic settlers thousands of years earlier, then visits the abandoned shielings – the high summer pastures for cattle, and the shelters their owners lived in while they grazed there long ago. As often in these essays it’s evident that Jamie studied philosophy. These aren’t so much ‘nature writings’ as meditations arising from her experience in nature and with people. Her poet’s sensitivity to place and language is revealed on every page.

Here for example she ponders describing places like this as ‘natural’ or ‘wild’, even ‘wilderness’ – but concludes that this ‘seems an affront to those many generations who took their living on that land.’ Whatever caused them to abandon their shielings, they left subtle marks. ‘What’s natural?’ she asks herself. We’re having to ‘replant the forests we cleared, there’s even talk of reintroducing that natural predator, the wolf.’

Most of her sentences are like that: lucid, colloquial, unforced – natural, perhaps. Not overtly ‘poetic’ or florid.

She’s alert to the sounds and sense of every word she uses, and deploys them with unobtrusive precision. It would be good to hear these pieces read aloud. Many of her words are of Scots origin, wild and natural as the things they signify: those shielings; machair – from an old Gaelic word for Hebridean grassy plains; creels – wicker baskets or lobster pots; sheep or cattle fanks – holding pens.

She imagines the shieling women eating bannocks  and whey – flatbreads cooked on skillets.

She uses metaphor and simile sparingly, but when she does they’re just right. Some examples I savoured: in the title essay she sails with a group of naturalists to the Sound of Shillay (from the Gaelic for ‘seal island’); she describes walking on the beach and sometimes flushing a flock of feeding shore birds:

I loved the moment when, after they’d all risen together, they all banked at once, like when you pull the string in a Venetian blind.

The title of the essay ‘Crex-crex’ is taken from the Latin name for corncrake. This shy brown quail-like bird is now very rare, having been hunted to extinction on the mainland. She stays on an island in the Outer Hebrides, one of its few surviving haunts. Her bird warden guide Sarah locates some and invites her to listen to their rasping call:

What does it sound like? Like someone grating a nutmeg, perhaps. Or a prisoner working toward his escape with a nailfile.

Now and again Sarah stops and tilts her head, all attention: ‘when she stops to listen she reminds me of a thrush on a lawn.’

Sometimes she relishes the opportunity to subvert over-used images, as when she enters a Neolithic burial chamber, a ‘dim stone vault’ (she’s fond of punchy, evocative monosyllables):

There is a thick soundlessness, like a recording studio, or a strongroom.

Not ‘silent as a tomb’. This is ‘a place of artifice, of skill’, you feel the ‘self-assurance’ of the artificers who built this place, perfectly orientated to face the setting midwinter sun, whose rays would hit the tomb’s back wall in ‘a complicit kiss’.

She delights in the findings on another island: a gannet’s skull, sawn off from the body with her knife. Part of an aeroplane’s wing, of all things. Everything intrigues her – and hence, her reader.

She doesn’t single out and describe these findings as curiosities worthy of exhibition in a museum. She muses and makes connections that probably result from her training in philosophy. In ‘Darkness and Light’, for example, she ponders the semantic force of these words and our human reactions to them. 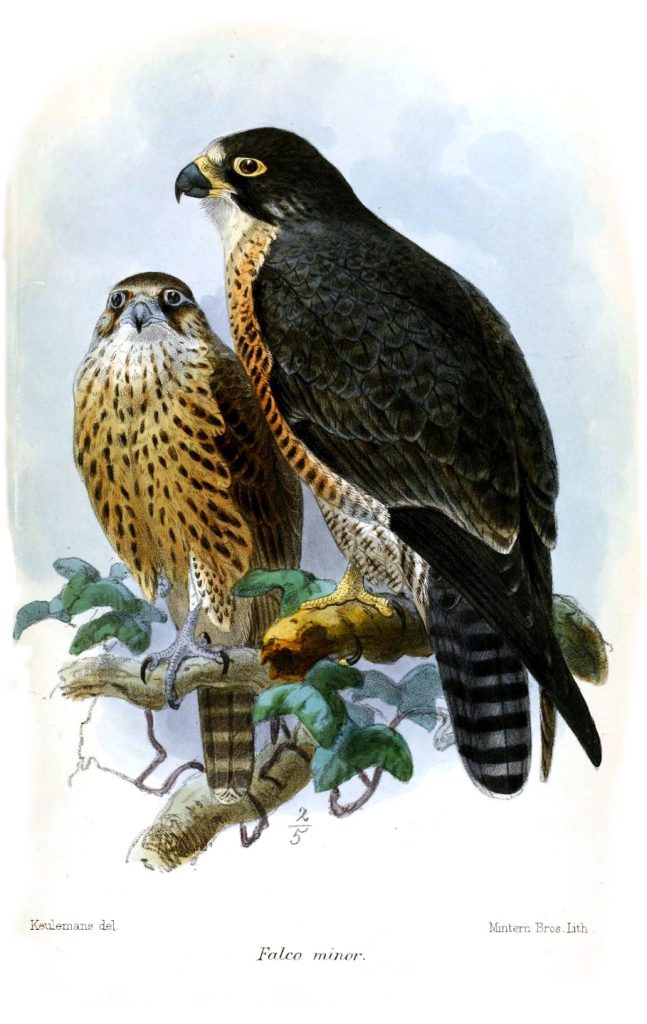 One of the best pieces relates her delight and anxiety in watching a pair of nesting peregrine falcons (and later, ospreys and an exotic crane in flight). She manages, without forcing the juxtaposition, to liken the precipitous ‘stoop’ of the peregrine on her prey – by diving down on it from above so it never knows what hit it – to the screaming Tornado jets that pass overhead, back from the war in Iraq. Later, her son asked her if they were going to be bombed. “No,” I said. “We will not be bombed.”

She hangs out of her window in her nightclothes one morning, scanning the sky for her peregrines with her binoculars. Her children demand their breakfast. This is a naturalist who feels guilty about making them wait, hungry, as she yearns to see where the female raptor will head.

Even cobwebs, observed by her door, glinting in the morning light, lead her to meditate on life and death as her husband fights for breath in hospital, his lungs infected.