John Harvey is a renowned Cambridge academic who’s written some fascinating studies on the nature of and relationship between the visual and literary arts (see my list of links to his non-fiction works at the end of this post). He’s also a prize-winning novelist (my list of posts on his novels is also at the end of this post) – not to be confused with the author by the same name of the popular crime fiction series featuring Charlie Resnick. 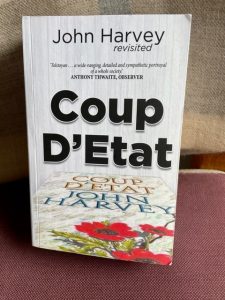 Coup d’Etat is set in Greece during the military dictatorship 1967-74 following the ‘Colonels’ coup’. This group of far-right, ultra-nationalist officers seized power and brutally suppressed all opposition, establishing what was euphemistically called a ‘national government’. To consolidate and enforce the junta’s stranglehold on the country the colonels transformed the judiciary into a corrupt system of kangaroo courts: those who dared to question their regime were summarily imprisoned, tortured, executed or exiled.

The central characters of this gripping, epic novel (it’s 600 pages long, but needs to be in order to depict the scale of events and their effects on the Greek people) enable the author to anatomise the functioning of this dictatorship. On the side of democracy is a brave, idealistic lawyer who tries initially to use his expertise to defend opponents of the junta, and then becomes another of its victims. He suffers terribly while in prison, and his wife undergoes her own ordeal trying to cajole the authorities into even revealing where they’ve imprisoned him, let alone to visit him.

Supporters of the regime are not shown simply as ogres and sadists, though many come close – not just the torturers in prison, but those who command them. More nuanced in this aspect of the narrative are those who strive to further their own political careers by sucking up to those higher up; like many in Nazi Germany, they were complicit with the regime while fully aware of its more brutal tendencies. Some are ideologues who have bought into the colonels’ aspirations to create a new Greek empire – with devious plans to reconquer Turkey by staging another coup in Cyprus, which could then be used as a springboard to invasion of their old enemy. Others are simply amoral in their ambition to use the corrupt system to enhance their status and gain more of the trappings of wealth and power they admire in their superiors.

An early reviewer described Coup d’Etat as Tolstoyan, and I don’t find this an exaggeration. Dr Harvey unflinchingly portrays the viciousness and monomania of the military regime, its ruthlessness in imposing its dictatorship in ways which have become horribly familiar over the last century, and which continue to fill news reports today about the war in Ukraine.

But he also shows enormous sympathy for and insight into the hearts and minds of his characters representing both sides in this terrible period of Greek history. Families caught up in the tumult of the times are shown as being often split in terms of their political allegiances and motivation – as all families are (I’m trying to avoid falling into the usual Tolstoy quotation).

Most impressive among the literary achievements of Coup d’Etat is the central trio of the loving couple of the lawyer Vangelis and his devoted wife Chryssa. Here again the author shows a capacity for showing human frailty and weakness even at times of enormous courage and resilience in their struggle against the cruel regime. The character of their English friend Michael, a journalist, enables John Harvey to provide a convincing outsider’s perspective on the turmoil and suffering caused in the lives of these ordinary, decent people by their military oppressors, but also to introduce a complicating, heartbreaking alternative love story into these already precariously situated lives.

In the foreword to this new edition of the novel, first published in 1985 and now reissued by Holland House as part of a full set of his novels (my thanks to the author and his publishers for providing copies of some of those I hadn’t yet read), Dr Harvey explains his own personal interest in telling this harrowing but uplifting story. In 1968 he married Julietta in her home city of Thessaloniki, and they witnessed many of the events depicted in the novel, and were told more about them by those who had been caught up in events during that dreadful time in the world’s oldest democracy.

This explains the gritty authenticity of the novel, but also the heartfelt, passionate engagement with it by the narrator, the sweep and tone of the narrative, and the richness of the characterisation.

The Subject of a Portrait (2014) HERE (three posts, including one by the author)