When I started this blog back in 2013, Javier Marías was one of the first novelists I posted about. He’s surely one of the most important and gifted writers of fiction alive today.

Two years ago I wrote about his 2013 novel The Infatuations (link HERE, with further links there to my several posts on his superb ‘Your Face Tomorrow’ trilogy).

If you’ve ever read Marías you’ll be aware that he tends to work over the same themes, tropes and motifs in most of his work: love and death, fidelity, memory and treachery – in the domestic sphere, especially in a marriage, and the public – justice, truth and lies. Sex features prominently, and Shakespeare. Perhaps most important of all: what we do when we tell stories about these things, or listen to such stories – is it possible to represent reality? Do stories represent reality, like novels? 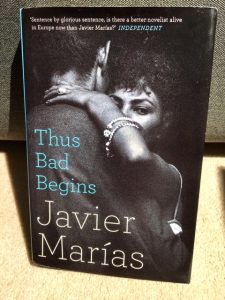 Once read, novels are ‘soon forgotten’, Marías wrote in The Infatuations. In his 2016 novel Thus Bad Begins it’s people’s lives that are said to be transitory and forgettable. Most of all of these themes are rehearsed in the opening three pages of the novel. It begins:

This story didn’t happen so very long ago – less time than the average life, and how brief a life is once it’s over and can be summed up in a few sentences, leaving only ashes in the memory…

Except of course Marías is going to devote 500 more pages to this story, not ‘a few sentences’. One of his better jokes; oddly, for such a dark, disturbing novel, there’s a lot of humour.

He introduces his two central characters, Eduardo Muriel, a director of B-movies, and his wife, several years his junior, Beatriz Noguera. The events our narrator, Juan de Vere or Vera (ie ‘truth’) relates took place in 1980 when he was just 23, and the Muriels some 20 years older than that. Spain was still reinventing itself after that long, estranging dictatorship of Franco, and divorce was still illegal.

Marriage was, then, ‘for life’ in those days, and ‘an escape route’ hard to find: hence the need for deceit, secrets; harder for women, who, if they’d had an extramarital ‘escapade’,  would have to live the life of an ‘impostor’, ‘disguise a new being before it even had a face to show the world’ (one of many resonances from Marías’ previous novels; the Oxford Hispanist Peter Wheeler, a central character in ‘Your Face Tomorrow’, pops up in a bit part). But these bitter thoughts are those of de Vere, who finds it hard to understand why anyone would ‘contract’ a marriage; only disease and death share that verb, as if all ‘augured ill or presaged doom or were, at the very least, painful’:

…but, unlike them, there was definitely no cure, no remedy for marriage, no resolution. Or only through the death of one of the spouses, a death sometimes silently longed for, and, less often, sought or induced or prompted, usually even more silently or in deepest secrecy.

All that would then remain of them would be ‘a brief memory. Or, on occasions, a story. A tenuous, rarely told story, since people tend not to tell stories about their personal life’…

The style is instantly recognisable as that of Marías: that convoluted syntax with its accumulating parallel or subordinate clauses (he habitually deploys ‘or perhaps’, ‘and yet’, ‘I suppose’, ‘or so it seems’ – all of these appear on the first page), which delay resolution and pile on alternative possibilities and modalities. The truth is as elusive or evasive as syntactic closure in a Marías novel.

Therein lies his appeal. He teasingly, with endless circumlocution, spins his thrilling plot from such multiple, beautiful threads – for his plots are comparable to those of great thriller-noir film auteurs like Hitchcock, who’s namechecked prominently in the narrative (there’s a trace of ‘Vertigo’ and ‘Rear Window’ in this one, with its unsettling sense of voyeurism and obsessive, secretive observation of characters, men and women, unaware of the male gaze upon them), or novelists like Hardy, Conrad and Stevenson, all of whom he translated into Spanish (sexual deception and coercion in Tess, perhaps, and a prominent plot device involving a crucial letter; spies, secret agents and skulduggery from the other two authors).

But he does it with a highly original, knowing, postmodern flourish, relishing the telling (and withholding) of his story and his manipulative, entrancing magician’s craft as much as Faulkner, Nabokov and that arch spinner of shaggy dog stories, Laurence Sterne (and yes, he translated all of them, too.)

So this is a gripping, heartbreaking novel of love and betrayal in a marriage, and the shame and remorse of traitors, and desire for vengeance and retribution in the betrayed. Forgiveness is withheld too long; love festers. A tragic marital secret revealed lies at its heart, and its disclosure to the reader, long delayed, is devastating.

The plot of Hamlet provides a kind of template (although Rumour’s Prologue to Henry IV.2 is also a running thread). De Vere is recruited by the wronged husband to act as his spy. Not on the treacherous wife, but on the husband’s lecherous old friend, who he suspects committed ‘vile acts’ against women.

De Vere portrays himself from the outset as a modern Polonius – ‘there’s nothing original about me’ he says, twice (although on the second occasion he adds, ‘nor, I suppose, about any of the others’). He gains the confidence of a man ‘in order to betray him’, a deception that causes him frequent spasms of guilt. Instead of an arras, de Vere spies on his target, engaged in a sordid tryst inside a Catholic sanctuary, from the top of a tree. When he’s challenged by a nun when he descends, the scene is like a comic take on Hamlet’s ‘get thee to a nunnery’ speech.

There are the usual lengthy monologues on all of these key themes. Their presence in this domestic tragedy is linked overtly to their counterparts in the bloodstained, labyrinthine Spanish political past: the stories, crimes, denunciations, blackmail, revenge and brutal atrocities perpetrated during the Civil War, and then worse that followed during the aftermath, then again after Franco’s death.

There was a ‘pact of forgetting’ after Franco, when Spaniards collectively showed ‘open distaste for and aversion to revenge and betrayal’, and ‘fallacious tales’ and brazen, ‘barefaced lies’, ‘secrecy and concealment’ proliferated. They erased or embellished memories, all traces of these earlier crimes and cruelties — a central factor in this novel, echoed in the domestic tragedy enacted in the Muriel household. Private talk mirrors the public discourse; ‘concealment and disguise’ became the order of the day.

De Vere comes to learn the expediency of ‘giving up trying to know what we cannot know, of removing ourselves from the hubbub of what others tell us throughout our life, so much so that even what we experience and witness seems more like a story told to us…’ And:

Households are full of rejections and slights and mortifications and insults, especially behind closed doors (and sometimes one gets shut inside with them by accident).

Once we learn the ‘facts’ of what happened,

Perhaps it’s best to shrug one’s shoulders and nod and ignore them, to accept that this is the way of the world.

Only then does ‘worse remain behind, because at least it is over. And thus bad only begins, the bad that has not yet happened.’

I’m not sure I get that. It seems to be a philosophy of stoical resignation – Hamlet’s lesson. Readiness is all (an axiom quoted in the narrative).

I didn’t find this ‘public/private’ structure is robust enough to sustain such a lengthy narrative. For the first time in my reading of Marías I found myself wanting to skip yet another meandering, portentous discourse on a philosophical topic that teetered on the edge of banality (so death is final, is it?).

In this post-truth world, however, there’s a sad contemporary relevance to a novel that, despite these longueurs, is still a stirring read.

Apologies that this post has become so long. It’s a long, richly complex novel, and I found it difficult to be brief.