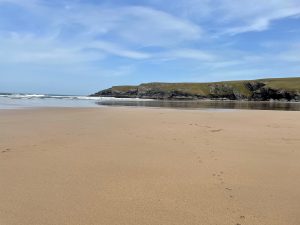 Yesterday I posted about the heart-warming sights and sounds of nature in spring. On Monday the most severe lockdown restrictions in England were lifted slightly: Mrs TD and I took advantage of the new rules and drove to Holywell Bay, near Newquay. Apart from longing to see the sea again for the first time in three months, I also wanted to find the holy well in its cave under the cliffs. Whenever I’ve been there in the past the tide has been high and the entrance unreachable. 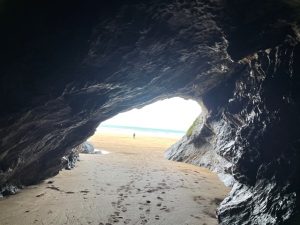 The only picture worth sharing: the view out of the cave on to the beach

It was a fine, brisk day, and there were surprisingly few people about. The tide was far out, and I entered the first sizeable cave and took a – not very good – picture. It didn’t look much like the images I’d seen online. On reflection I think this was not the right cave.

The right cave has a natural spring deep inside it, and multicoloured stains on the rocks, caused by the minerals in the rock over which the spring water drips. The holy well itself is named after St Cuthbert.

Legend has it that Aldhun, bishop of Lindisfarne and Durham, was instructed in a vision to transport the relics of St Cuthbert, the first bishop of Lindisfarne, to Ireland. He was blown off course, and ended up at what is now Holywell. He remained there long enough to build a church a mile inland at the village now called Cubert.

This story doesn’t tally with the well-known history of Cuthbert’s relics. The monks of Lindisfarne had to remove and hide the relics several times in the early middle ages to protect them from hostile forces, but the saint’s remains eventually found a permanent shrine in what became Durham cathedral. (I posted on several Cornish holy wells in the past; posts on Bede’s Life of St Cuthbert – link HERE.)

Folk legends have great potency, however; Aldhun is said to have had another vision in which he was told to take the relics back to Durham. While the saint’s bones were being removed from the cave where they’d been stored, they touched the rock-pool’s sides, thereby infusing them with their legendary miraculous healing powers.

Local people, and many from further afield, would bring sick children to the cave on certain auspicious dates to dip them into the healing waters, or to drink the mineral-rich water. Disabled people would leave their crutches in the cave as votive offerings after taking the waters. Stories of miraculous cures, like those at so many other folk shrines, circulated widely.

It’s a nice story, and the cave has a mystical feel to it – even if I was in the wrong one. I should have taken a torch.

Wednesday was Mrs TD’s birthday, and we were able to meet her sister and brother-in-law at a beach a short drive away and go for a walk – and a picnic on the beach in front of the Carbis Bay hotel. This is where the G7 conference will take place in June. Workmen were busy sprucing the place up in readiness. What an inspiring place to gather the world’s leaders to sort out the world’s mess. They could do with a bit of St Cuthbert’s healing influence. 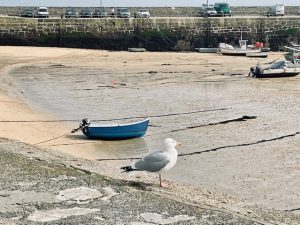 We moved on to St Ives, eerily deserted. After a short rest on a harbour-side bench, soaking up the warm sun, we passed a small group of strangely tame sandpipers, gossiping and preening on the pavement. My picture didn’t do them justice, so I won’t include it here. Instead here’s a rather truculent gull.

A sea-mist descended with the suddenness of a stage fog machine. Very Stephen King.

It was so good to feel the restorative power of the ocean and beaches again. 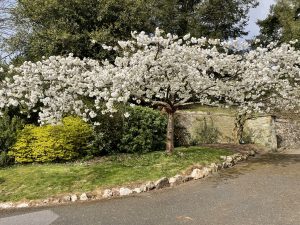 Next day I visited our local park to check on the progress of the blossom. This magnificent tree took my breath away.

So did the symmetrical perfection of this camellia flower.

PS added later: today is the feast day of a saint I’ve posted on several times in the past – the subject of my postgrad research – Mary of Egypt. 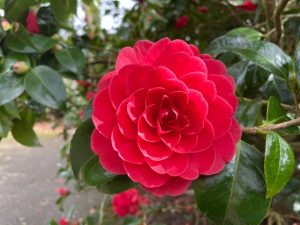