John McGahern (1934-2006), Amongst Women. Faber and Faber paperback. First published 1990, when it was shortlisted for the Booker Prize; it won the Irish Times/Aer Lingus literary award in 1991

Michael Moran, the protagonist of John McGahern’s fine novel Amongst Women, is not an endearing character – on the contrary, he’s a bully and a tyrant in his own household and community. To his three daughters, two sons and second wife, Rose, he’s an emotionally stunted, self-pitying husk of a man. Yet McGahern is able to make us do what all the best novels do, and that is to see and understand this unlovable, tragic figure, and appreciate why his family for the most part love him with such unlikely devotion.

There’s very little plot; instead we get, in just under 190 pages, an epic, unshowy but brilliantly realised portrait of Moran’s character, and an insight into why he’s so bitter, angry and disappointed. This is apparent from the opening paragraph:

As he weakened, Moran became afraid of his daughters. This once powerful man was so implanted in their lives that they had never really left Great Meadow, in spite of jobs and marriages and children and houses of their own in Dublin and London. Now they could not let him slip away.

This opening takes place chronologically near the end of the novel’s action. What follows is a sequence of vivid flashbacks which cumulatively explain the dynamics of this family drama. First Moran’s daughters instigate a revival of Monaghan Day, the saint’s festival in the local town of Mohill (in Co. Leitrim), when he entertained with whiskey and acrid nostalgia his former subordinate, McQuaid, from their ‘column’ in the guerrilla column that fought in the bitter war of independence in Ireland in the 1920s. The girls hope that this will snap their father out of his morbid depression (‘Who cares?’ has become his increasingly frequent complaint as he’s aged). Again McGahern’s unobtrusive, scalpel-sharp prose illustrates the import of this: 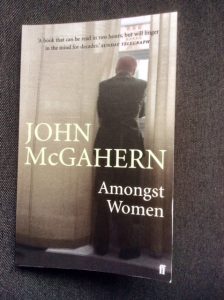 They clung so tenaciously to the idea [of Monaghan Day] that Rose felt she couldn’t stand in their way. Moran was not to be told. They wanted it to come as a sudden surprise – jolt. Against all reason they felt it could turn his slow decline around like a Lourdes’ miracle. Forgotten was the tearful nail-biting exercise Monaghan Day had always been for the whole house; with distance it had become large, heroic, blood-mystical, something from which the impossible could be snatched.

As their father’s life nears its end the daughters grow closer to him and each other:

Apart, they could be breathtakingly sharp on the others’ shortcomings but together their individual selves gathered into something very close to a single presence.

Despite his Lear-like patriarchal tyranny, the girls (more than the two boys) are drawn irresistibly back into the father’s sphere of complicated influence:

Within the house the outside world was shut out. There was only Moran, their beloved father; within his shadow and the walls of his house they felt that they would never die; and each time they came to Great Meadow they grew again into the wholeness of being the unique and separate Morans.

What slowly becomes apparent is that Moran’s problem arises from that common inability of the soldier to adapt himself to life after the war. As a guerrilla commander Moran felt he received the respect and devotion he deserved. When the war ended he was irreparably disappointed; on the one occasion he speaks of his wartime experiences to his family he complains:

“What did we get for it? A country, if you’d believe them. Some of our own johnnies in the top jobs instead of a few Englishmen. More than half my own family work in England. What was it all for? The whole thing was a cod.”

He was unable to rise through the ranks and make a career in the army after the Truce because of his irascible, intransigent nature, his truculent incapacity for ‘getting on with people’. In a sense, then, the novel is an allegory of the state of Ireland; Moran’s imperious rule in his own house can be likened to the way his country fared after the terrible divisions of the struggle against England followed by the Civil War. His deep Catholic faith mirrors that of his country; his insistence on the family gathering each night to recite the Rosary together is a scene frequently depicted in the novel as symbolic of this patriarchal, spiritual hold. The novel’s title is taken from the Ave Maria prayer of that Rosary: Hail Mary, full of grace…Blessed art thou amongst women. It’s also amongst the women of his household that Moran holds court; he proves less able to rule his sons.

I’ve said little about the two sons, Luke and Michael, both of whom (unlike their sisters) rebel against their father – Luke more steadfastly than the softer Michael – and it’s sadly apparent that despite their desire to break free of his moody tyranny, they share many of his petulant, self-justifying, misogynistic characteristics. A constant theme in Irish literature from the turn of the 20C has been that struggle to break free of what Joyce called that ‘priest-ridden’ country. Exile and silence is the life Luke (like Stephen Dedalus) chooses over being an acolyte of his baleful father(land).

This is a fine novel, one that I found painfully haunting and enriching.